The stock of Starbucks (NASDAQ:SBUX), though it has pulled back lately, has been a huge winner this year. The coffee giant, now led by former tech executive Kevin Johnson as CEO, has done a great job executing in 2019 and rejuvenating same-store sales, allaying some of the fears that struck the company in 2018.

What has precipitated Starbucks' rejuvenation? The answer is innovation on both the beverage front and the technology front. In beverages, Starbucks has developed more cold coffee drinks for afternoon dayparts, spurring demand in an area that was flagging last year. On the technology front, the company continues to grow its My Starbucks Rewards program and integrate more tech features into its Starbucks digital app.

One of the most important innovations in that digital ecosystem is Starbucks Delivers, which the company is expanding to a market near you as we speak. 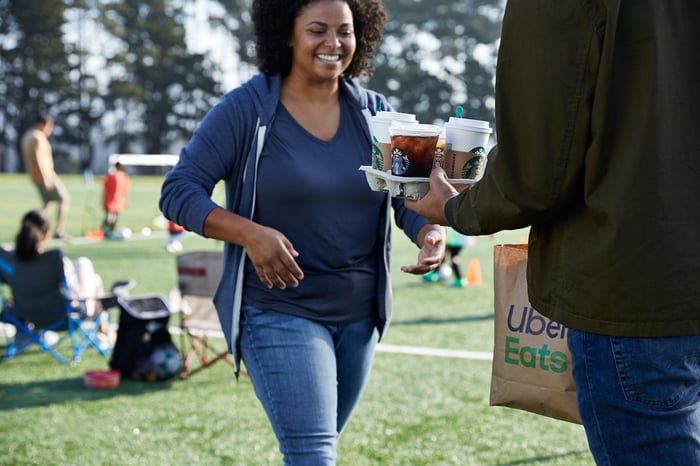 Starbucks is ramping up its delivery partnership with Uber Eats. Image source: Starbucks.

Delivery: the next frontier

Starbucks actually leaned into delivery in a big way first in China, the company's main growth driver, after same-store sales began lagging there last year. Management attributed that in part to the rising popularity of food delivery throughout the country, where Starbucks had not initially focused, instead leaning into its "third place" retail stores.

However, Starbucks soon inked a big delivery partnership with Alibaba's (NYSE:BABA) Ele.me food delivery service, and the difference quickly showed. Since the partnership was announced just over a year ago, Starbucks' fortunes in China have improved, with Chinese same-store sales increasing 6% last quarter versus a 2% decrease in the prior-year quarter. Chief Development Officer of Coffee & Tea John Culver said on the recent conference call:

We obviously have a very strong partnership with Alibaba and have dedicated drivers that are delivering Starbucks products. We've gone through and rationalized the menu. And we've also obviously introduced premium packaging as a part of the delivery experience.

Having gotten its feet wet in China, Starbucks is now bringing the delivery experience to U.S. customers -- it just announced an expansion into several new U.S. markets.

While Starbucks is partnering with Alibaba in China, for the rest of the world, it's using Uber (NYSE:UBER) Eats. The U.S. Starbucks Delivers program began a pilot service in late 2018 in Miami, but a recent press release revealed that Starbucks is now expanding its U.S. delivery service in a much bigger way.

After the initial Miami pilot, Starbucks has methodically added new markets throughout the year, moving next to San Francisco then on to more dense, highly populated cities including Boston, Chicago, Los Angeles, New York, and Washington, D.C. Then came an additional push into the urban markets of Seattle, Houston, Dallas, and Orange County in California.

With the latest expansion, Starbucks Delivers will cover 16 U.S. markets, and the company aims to complete its nationwide rollout by the end of 2020. When it does, the U.S. will mark the 15th country in which Starbucks is now delivering its food and beverages to homes and businesses.

The next phase of coffee

The Chinese consumers are in many ways ahead of the U.S. in terms of being digitally native and using food delivery apps due to the population's early mobile adoption and the country's low labor costs for delivery drivers. As such, not only has Starbucks exported its brand and successful "third place" retail culture to China, but it's now taking innovations originating in the Middle Kingdom and introducing them here in the U.S., delivery being a prime example. Digital delivery is of course an exploding trend not only for Starbucks but for other fast-food and fast-casual restaurant franchises generally.

Nevertheless, Starbucks is clearly leading the pack in terms of digital innovation and has even begun licensing its IP to other restaurants. Therefore, investors should keep an ear out for how these delivery initiatives are performing, along with the company's broader technology ecosystem, when the company reports earnings on Oct. 30.