The news broke early this morning: "Tiffany & Co. ... today confirmed it has received an unsolicited, non-binding proposal from LVMH Moet Hennessy -- Louis Vuitton to acquire Tiffany for $120 per share in cash." The stock is up more than 30% already in response to Tiffany's press release. But according to one analyst, the shares could go up even more, with German investment banker Deutsche Bank positing a $130 share price in an upgrade this morning. 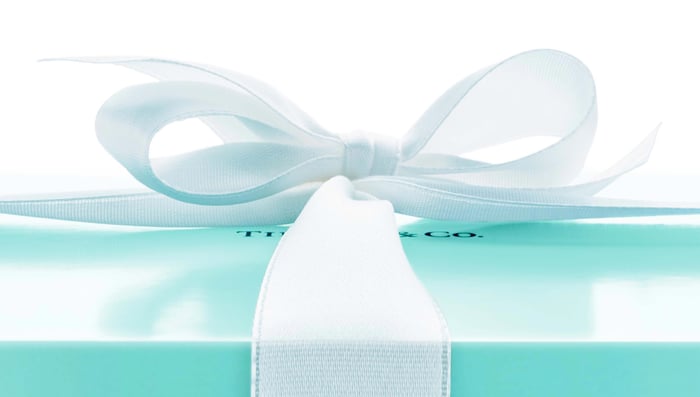 No sooner had Tiffany announced the receipt of its buyout offer from LVMH ( LVMHF -0.90% ) than management proceeded to pour cold water over it.

"Tiffany Shareholders Advised to Take No Action Pending Board Review," cautioned management. Although the board "is carefully reviewing the proposal ... consistent with its fiduciary responsibilities," management is not immediately convinced that $120 per share is a fair price for the company -- despite the fact that the stock was worth less than $100 as recently as Friday, and as little as $80 back in August.

Indeed, argues management, Tiffany was "successfully executing on its business plan" just fine before this buyout offer emerged, and it "remains focused on achieving its goal of becoming The Next Generation Luxury Jeweler," with or without LVMH -- which suggests it might not be all that eager to accept LVMH's offer.

What analysts have to say about that

And in Deutsche Bank's view -- and the view of others -- Tiffany is right to hesitate.

In an upgrade note reported by StreetInsider.com this morning, Deutsche argues that the lack of anything more than "a handful of global players" in this "largely unbranded" industry (only 20% of the market) means there aren't a lot of high-profile names around to be bought.

Tiffany is one of those brands, and certainly one of the highest-profile. Moreover, LVMH has "good knowledge" of its intended target, and even a "history of interest in the brand" -- both indications that LVMH's interest in buying Tiffany is very serious. Given that its would-be buyer is a motivated buyer, Deutsche thinks the jewelry specialist should perhaps hold out for more money, arguing it's worth $130 a share (and a buy).

Others are even more optimistic, with Credit Suisse suggesting the stock could be worth $140, and Cowen & Co. chiming in with a prediction that Tiffany could command an "exceptional premium" to its intrinsic value -- as much as $160 to $180 per share! This, argues Cowen, would bring Tiffany closer to the "~22x EV/EBITDA [valuation] similar to Bvlgari and Versace transactions."

Taken at face value, that $180 price target, for example, suggests there's still another 38% or more upside to Tiffany stock today -- and helps explain why it has skyrocketed well beyond LVMH's $120-per-share offer. And yet, CNBC is reporting that such projections may be unrealistic.

Moreover, there are reasons to suspect that LVMH itself might decline to buy if the price Tiffany management demands is too high. Tiffany's last earnings report, for example, didn't exactly sparkle, with comps falling 1% year over year, sales down 3%, earnings off 4% -- and management topping all this off with a cut to full-year guidance.

Valuation-wise, Tiffany doesn't look like much of a gem, either. Even with $561 million in trailing GAAP profit, the stock sells for nearly 28 times earnings -- a very pretty penny indeed, given that analysts polled by S&P Global Market Intelligence don't see the company growing earnings even 8% annually over the next five years. And that's the valuation at $130 a share. If Tiffany demanded $140, $160, or even $180 per share as its buyout price, the stock would look even more overvalued.

Perhaps worst of all, with only $292 million in trailing free cash flow, there's an argument to be made that the company shouldn't even be credited with all the "earnings" it's been reporting. For every $1 in GAAP profit it reports, Tiffany actually generates only about $0.52 in real cash profit, making its stock correspondingly even more expensive.

So whether or not LVMH ultimately decides to buy Tiffany, I don't think you should buy Tiffany stock -- and definitely not in the expectation that it's going to go up any more than it already has today.