Please ensure Javascript is enabled for purposes of website accessibility
Log In Help Join The Motley Fool
Free Article Join Over 1 Million Premium Members And Get More In-Depth Stock Guidance and Research
By Lee Samaha - Oct 29, 2019 at 7:07AM

Headwinds are gathering for the heavy equipment giant, but a low valuation combined with management's commitment to dividend growth could make it appealing.

The key conclusion to be drawn from Caterpillar's (CAT -2.57%) third-quarter report probably isn't what most investors thought it would be before it was released.

It doesn't relate to the company's sales and earnings momentum, nor to the near-term guidance -- both are challenged. Instead, the No. 1 takeaway should be that interest rates and stock valuations still matter. Simply put, Caterpillar's earnings outlook isn't good, but if management's projections are correct, then it's good enough to suggest buying the stock. Here's why.

More than just a Dividend Aristocrat

Despite being a company with highly cyclical earnings, Caterpillar is a Dividend Aristocrat, and currently yields around 3.1%. At this point, it's worth noting that since 2011, there has only been a brief period (at the end of 2018) when the yield on the 10-year Treasury exceeded Caterpillar's current dividend yield. 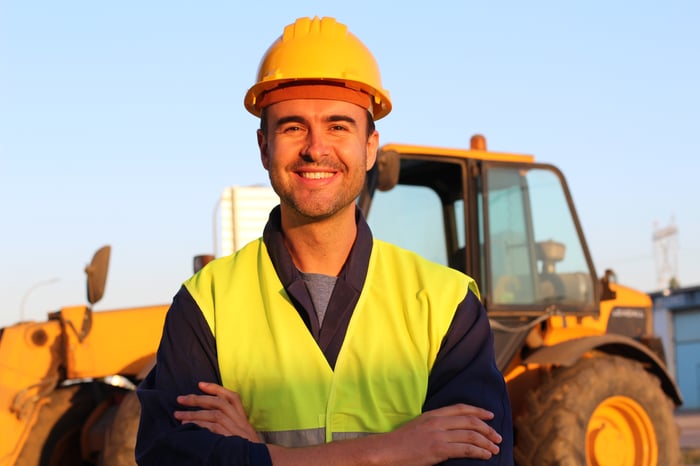 While this is not the place to discuss interest rates -- if you had a crystal ball that could accurately tell you where those were headed, you would be filthy rich already-- the following points need to be noted in connection with Caterpillar's earnings and outlook statements.

Putting all of this together, it's clear that if Bonfield is right about earnings, then buying some Caterpillar stock might make sense for income-focused investors. Not only is its current yield higher than that of the benchmark 10-year Treasury, but based on management's projections, that yield will grow to between 4% to 4.3%, based on the current stock price of $135. Meanwhile, management is taking advantage of low interest rates to make cost-cutting moves.

Of course, investors can't just unquestioningly accept Caterpillar's projections. There's plenty of evidence to suggest the company's near- to mid-term growth prospects are dimming. Indeed, the recent results were disappointing, and management cut full-year EPS guidance from a range of $12.06 to $13.06 to a range of $10.90 to $11.40.

Moreover, two out of the three machinery segments (Caterpillar also has a financial product arm) reported declines. Bonfield put that down to "greater-than-expected reduction in dealer orders in the third quarter and the shift down in anticipated end-user demand."

In other words, the dealers that buy equipment from Caterpillar are experiencing weaker demand, and are responding by reducing orders.

Caterpillar's retail sales figures for its various end markets are mixed. On the negative side, the drop-off in rolling three-month sales to resource industries suggests a significant decline in heavy construction and aggregates, as well as mining capital spending. Nonetheless, management continues to believe in a long-cycle recovery in mining capital spending. 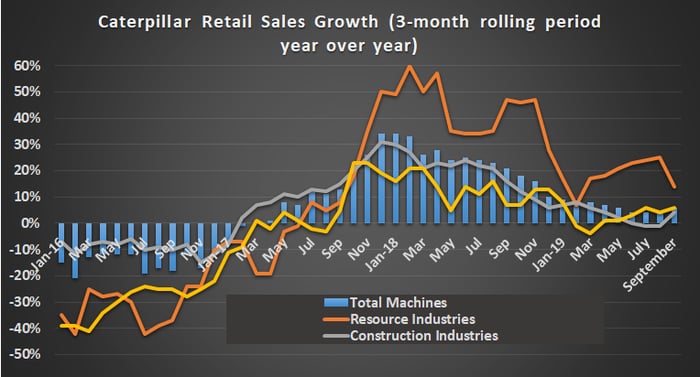 Earnings headwinds are certainly mounting for Caterpillar, but Bonfield reiterated his view the company's future free cash flow would be in the range of $4 billion to $8 billion, and given that the current dividend outlay is about $2 billion annually, the company's dividend aspirations look achievable.

Provided you don't believe the global economy is about to fall into a protracted recession, Caterpillar looks a decent option for dividend investors. In addition, at its current price-to-earnings ratio of less than 13, the stock doesn't look expensive, even if earnings are flat next year -- as analysts expect them to be. Just be aware you might have to put up with some negative near-term headlines as earnings come under pressure due to its faltering end markets.