Please ensure Javascript is enabled for purposes of website accessibility
Log In Help Join The Motley Fool
Free Article Join Over 1 Million Premium Members And Get More In-Depth Stock Guidance and Research
By Steve Symington - Oct 31, 2019 at 9:00AM

Down 15% on the heels of its Q3 disappointment, should investors buy the networking products leader now?

When Netgear (NTGR 1.84%) announced third-quarter 2019 results last week, suffice to say investors weren't pleased with what the networking technology specialist had to convey. Shares plunged 15% on the news as both revenue and earnings fell short of expectations, with Netgear chairman and CEO Patrick Lo describing "geopolitical factors" as hindering the company's growth.

But could the pullback be an opportunity to open or add to a position? Let's take a closer look at what Netgear accomplished last quarter to find out, starting with its headline numbers relative to the same year-ago period.

First, there's no escaping that revenue was near the lower end of Netgear's guidance provided in July, for a range of $265 million to $280 million.

Trending toward the bottom line, adjusted operating margin also contracted 2.7 percentage points year over year to 7.8%, below guidance for a range of 8.5% to 9.5%. And if you exclude items like stock-based compensation and restructuring expenses, Netgear's adjusted (non-GAAP) net income from continuing operations arrived at $20.7 million, or $0.65 per share, down from $0.73 per share a year earlier.

Most analysts were modeling higher adjusted earnings of $0.78 per share on revenue closer to $296 million. 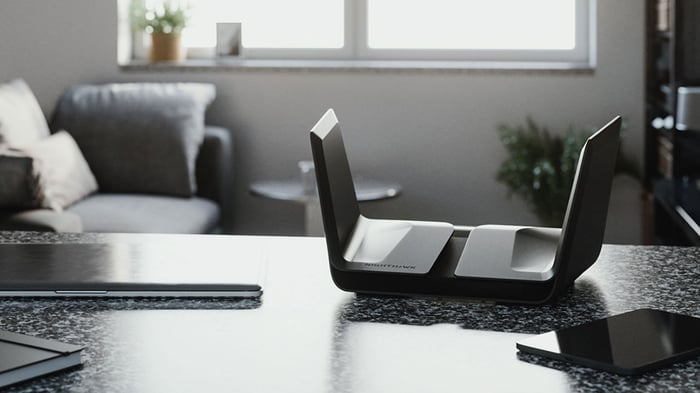 On one hand, the blame for the drop lies with Netgear's connected home segment (which notably includes its Nighthawk and Orbi products), where sales fell 2.1% to $190.7 million. Small and medium business solutions revenue, on the other hand, mustered modest 0.6% growth to $75.2 million.

So what about geography? As it happens, Netgear's revenue in the core Americas region grew 1.6% to $178.7 million. But that gain was more than offset by declines from the Europe, Middle East, and Africa (EMEA) region (down 6.8% to $49.6 million), as well as the Asia-Pacific geographic region (down 6.7% to $37.6 million).

"While North America performed well for us in Q3, this was countered by headwinds in EMEA and APAC that dampened our sales late in the quarter due to geopolitical factors such as Brexit uncertainty, Yuan depreciation, and the unexpected economic slowdown in the China/Hong Kong region," Mr. Lo elaborated.

Still, he noted the company is enjoying a "strong market reception" for its new WiFi 6 product line, additional offerings from which Netgear plans to roll out worldwide over the next few months.

For the fourth quarter, however, Netgear cautioned that revenue growth will continue to be restrained not only by ongoing political strife in Europe and China, but also by the company's strategic move to reduce channel inventories in North America in anticipation of an accelerated shift toward WiFi 6 solutions.

Though Netgear anticipates the latter will help return the U.S. WiFi market to growth next fiscal year, in the meantime it expects fourth-quarter 2019 revenue of $240 million to $255 million -- down from roughly $289 million a year earlier, and far below Wall Street's estimates for revenue closer to $296 million.

So what does that mean for investors? Given stubborn macroeconomic headwinds facing Netgear today, for now I think most prospective shareholders would do well to wait for more tangible progress toward the company's goal of riding WiFi 6 to return to sustained, profitable growth in 2020. Until that happens, I think there are plenty of more attractive places to put our money to work, and I'm personally content continuing to watch Netgear's story play out from the sidelines.