The coffee chain reported a strong fiscal fourth quarter, bucking fears of a slowdown in China.

Starbucks (SBUX 0.23%) reported a strong fiscal fourth quarter that included growth in its two largest markets. U.S. comparable-store sales gained 6%, while China had 5% comps growth, with a solid increase in transactions of 13%. The overseas strength bucked some negative sentiment toward China since it has showed signs of an economic slowdown as the trade war with the U.S. continues.

Highlights from the fourth quarter

Earnings were strong, and overall guidance suggests fiscal 2020 will be good. But it's worth noting that fiscal 2020 forecasts don't provide a ton of upside over 2019.

The strength in diluted earnings is related not only to net income growth, but also the continually declining share count. Weighted average shares are down 10.6% from the year-ago quarter.

Starbucks provided EPS guidance for fiscal 2020 of $2.84 to $2.89. On a non-GAAP basis, earnings are expected in the range of $3.00 to $3.05. That wouldn't be much growth compared with fiscal 2019's full-year EPS of $2.92. Going off that guidance, shares are trading at a little under 30 times the company's forecast. Starbucks tends to be an expensive stock, but the premium is still something to consider. 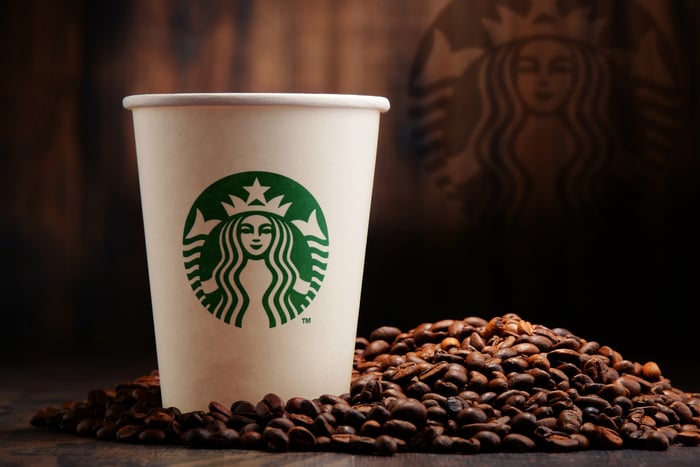 Overall, the fiscal Q4 release closed out the year in style. Transactions in the Americas increased 3% versus a decline of 1% in 2018. The average ticket increased 3%, while overall revenue grew 9% to $4.65 billion. Operating margins did decrease by 70 basis points to 20.2%, but the segment still performed well. International comps grew 3%, while transactions improved by 1% versus a decline of 1% in 2018. Average ticket size increased 3% compared with an increase of 2% the year prior. International revenue gained 6%, while operating margins increased 180 basis points to 16.7%.

The balance sheet is bothersome

I have admittedly been wrong on Starbucks for a while. Weak operating income in the past led me to believe that it was unable to get meaningful value from its overseas expansion. Instead, we're seeing the coffee giant derive growth from China when growth is much slower than in the past. More optimistic views were certainly right.

My one critique with Starbucks is its balance sheet. For such a well-liked blue chip stock, long-term debt continues to expand, and is now at $11.2 billion at the end of the quarter. The company is running a deficit of $6.23 billion on the balance sheet. This makes continued comps gains a necessity. As someone who really prefers value, I see a problem here. Should things shift, and weaker economic conditions do hit comps, there won't be as much wiggle room for the stock -- especially with its P/E of nearly 30 times forward earnings guidance.