Smartsheet (NYSE:SMAR) offers a web-based subscription service with which multiple people can collaborate on a project. The company is pursuing the huge market opportunity of unstructured work, which according to research company Gartner  is 60% of the work we do. Unstructured work is ad hoc work that involves multiple mechanisms of organization and communication, including email, phone calls, whiteboards, spreadsheets, and in-person meetings. Smartsheet seeks to organize all this work by allowing customers to collaborate in real time via its cloud platform in a way that doesn't require coding knowledge by its users.

A lot of work that people do involves products created by Microsoft (NASDAQ:MSFT). For instance, if you are writing a document, you may very well use Microsoft Word. If you are creating a spreadsheet, you would probably use Microsoft Excel. Many companies subscribe to Microsoft Office 365, and workers are very familiar with these products. This is a main reason Microsoft is a $1 trillion company today.  So that's an important question a Smartsheet investor needs to think about: Is Microsoft a competitive threat? 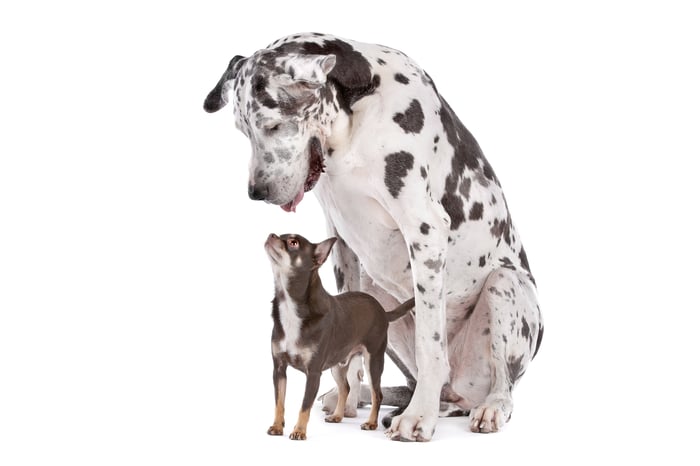 The answer appears to be: not at the moment. Consider that even though Smartsheet is a comparatively tiny company with a market cap of $3.47 billion, it has already achieved a lot of very impressive customer wins in the marketplace, including Cisco, Starbucks, and Netflix.  Three million workers subscribe to its software, spread out over 80,000 employers.  Its corporate customers include 90% of the Fortune 100 and 75% of the Fortune 500.  Like many software-as-a-service (SaaS) companies, Smartsheet has a "land and expand" strategy: a few employees in a company try the service, and then the number of subscribers increases dramatically because of popularity and word of mouth. Smartsheet has a dollar-based net retention rate of 134%. That's an outstanding number, indicating that Smartsheet is not only renewing the subscribers it already has, but also actively increasing subscribers among its existing customers.

Will the empire strike back?

While of course Microsoft is a scary competitor, investors should remember that Microsoft Project has been around since the 1980s.  While the software has achieved a certain amount of popularity with users, it does not have the ease of use (or the popularity) of Microsoft programs like Word and Excel. Historically collaborative software can be difficult to use, and users often require tech support. Indeed, when Smartsheet first introduced its collaborative offering, the company had trouble getting any traction in the marketplace for precisely this reason. The software had a lot of functionality, maybe too much, and it overwhelmed users who weren't very technical. So Smartsheet simplified its offering and made it easy to learn. That's when sales really started taking off for the company. Of Smartsheet's customers, 92% say its software is easy to deploy and use, and 96% would recommend Smartsheet to a colleague.

Microsoft is trying its best to defeat the underdog. It's recently rolled out an all-new version of Microsoft Project, trying to improve the collaborative aspects of its software.   Microsoft Project is now fully integrated with Microsoft Teams, the collaborative tool that competes with Slack Technologies. But of course this illustrates an inherent weakness with this giant competitor. Microsoft is not doing everything it can to increase sales of its Project software. Instead Microsoft is doing everything it can to increase sales for the company as a whole. So its collaborative offering is always limited, because it's trying to drive sales to other Microsoft products and services. Smartsheet, on the other hand, is focused on improving sales for its software, and so its solution allows users to collaborate with anybody and everybody, regardless of what software those collaborators are using.

Smartsheet also has far more integrations than Microsoft Project. Smartsheet is integrated with Microsoft Teams but also with Slack and Google Drive  and Dropbox and Atlassian and salesforce.com and DocuSign and scores of other software companies. So while Microsoft is a large and dangerous competitor, the smaller Smartsheet is achieving great success in the field of collaborative software precisely because the company is more open to working with other kinds of software.