A shocking admission and financial results slammed these two companies at the beginning of the week.

For top stocks, this week started out rather well. The major indexes all rose significantly well, supporting the prices of many famous names on the market.

Many, but by no means all. The following two companies saw notable declines during the day. Let's dig into the reasons why -- perhaps the drops are a sign of more declines to come. 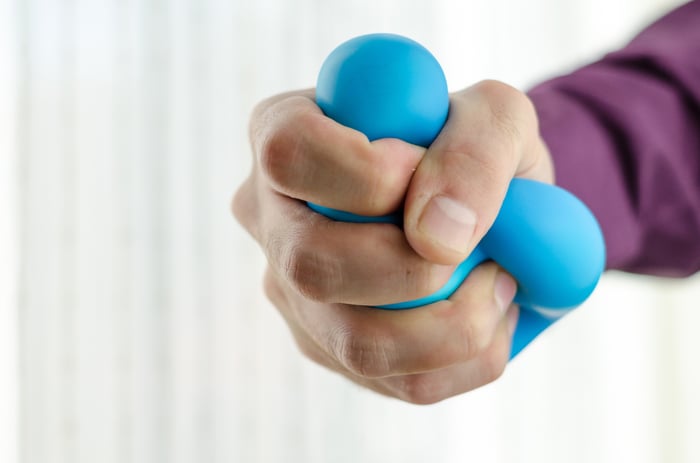 Quick, what's worse than a publicly traded company lowering its revenue guidance? If you answered "admit to a potentially scary accounting scandal," you win a pair of expensive athletic shoes.

This is the case with Under Armour (UA 2.19%) (UAA 5.39%). The once-popular underdog athletic apparel stock was one of the worst performers on Monday, sliding by 18% on those two factors.

If it weren't for the pair, Under Armour's shares wouldn't have been pounded the way they were. The company's Q3 of 2019 results were released on Monday, revealing a marginal year-over-year decline in revenue to $1.4 billion. This broadly met analyst expectations.

On the other hand, GAAP net profit increased 7% to $102 million ($0.23 per share), which was well above the $0.18 average estimate from analysts tracking the stock.

But as investors know very well, stocks trade on their potential, not their past. Under Armour trimmed its revenue guidance for the entirety of fiscal 2019. The top line should expand by roughly 2%; the previous expectation was for a 3% to 4% increase.

Factors behind the cut include challenges in its direct-to-consumer (DTC) segment and troubles with inventory. Other elements of guidance -- such as the anticipated $0.33 to $0.34 earnings per share -- remained basically unchanged.

Investors might have been able to swallow a weaker revenue projection. But what compounded the bad news was Under Armour's admission that its accounting practices -- specifically its method and timing of revenue recognition -- have been under federal investigation for a couple of years.

That admission came on the heels of an explosive Wall Street Journal article revealing that the Department of Justice (DOJ) is leading a nonpublic probe into the matter, with the assistance of the Securities and Exchange Commission (SEC).

Acknowledging the thrust of the Journal story, Under Armour released a statement saying that it "began responding in July 2017 to requests for documents and information relating primarily to its accounting practices and related disclosures."

"The company firmly believes that its accounting practices and disclosures were appropriate," it added.

But a nearly 20% one-day drop in the stock price shows that investors aren't necessarily buying this. Situations like this are frequently "tip of the iceberg" moments, with deeper problems surfacing after the initial revelation. For this reason alone, I'd leave Under Armour stock alone for now, even though the company has performed well in the past.

Shrunken guidance is also a factor driving down World Wrestling Entertainment (WWE 2.00%) stock. Since WWE reported its own Q3 of fiscal 2019 results on Thursday, the shares have lost almost 16% of their value. On Monday, WWE suffered a 5% drop.

WWE is an entertainment stock that basically supplies a single form of entertainment (spoiler alert: professional wrestling; its film studio unit is never a big factor in its results). As such, its fundamentals can careen wildly from quarter to quarter, and from year to year.

That said, investors might not be comfortable with the considerable drops in net profit and free cash flow revealed in the latest quarterly figures. And while revenue beat estimates, it was still down slightly from that of Q3 2018.

This stock saw a huge boost in mid-2018 after WWE inked a $1 billion-plus deal to air its Smackdown! TV show on Twenty-First Century Fox's Fox network.

Smackdown! finally started airing on Fox last month, and its ratings so far have been kind of a seesaw; perhaps some investors were expecting a monster hit right from the opening bell. It's still very early days, though.

I'm a longtime WWE shareholder, so I don't get dizzy on the frequently violent swings in core fundamentals, or the up-and-down of Fox TV ratings. WWE has a unique product, and it's proven over the years that it can reliably make a buck with it.

I also think it's too early to determine how effectively WWE will capitalize by having a program on as big a platform as Fox; I believe we'll be pleasantly surprised by knock-on effects such as higher merchandise sales and maybe better attendance at live events.

On top of that, the company just announced an expansion of its lucrative deal with the government of Saudi Arabia.

I'm a believer in this stock, and I think it's still a buy at present levels.