The third quarter in numbers

During the third quarter of 2019, revenue grew 5% year over year, or 8% when excluding exchange rates from a strong U.S. dollar and correspondingly weak Chinese renminbi. With operating expenses being held in check again, operating profit and earnings per share increased 11% and 14%, respectively, compared with the same period in 2018.

Here's the picture paired with the first half of the year:

Though Pizza Hut is still doing better year-to-date, it did suffer some setbacks in Q3. Restaurant margin (restaurant-level profits divided by total sales) fell to 11.4% during the period compared with 13.8% a year ago -- mostly due to inflation in basic commodities and higher wages. KFC, for its part, grew restaurant margin to 20.1%, helping it recover from a bad start to 2019. Through three-quarters of the year, total same-store sales (a combination of foot traffic and guest ticket size) is up 4%, led by a 4% increase at KFC but a meager 1% gain for Pizza Hut. The company opened up 231 new locations during the last three months, bringing total count at the end of the third quarter to 8,917. 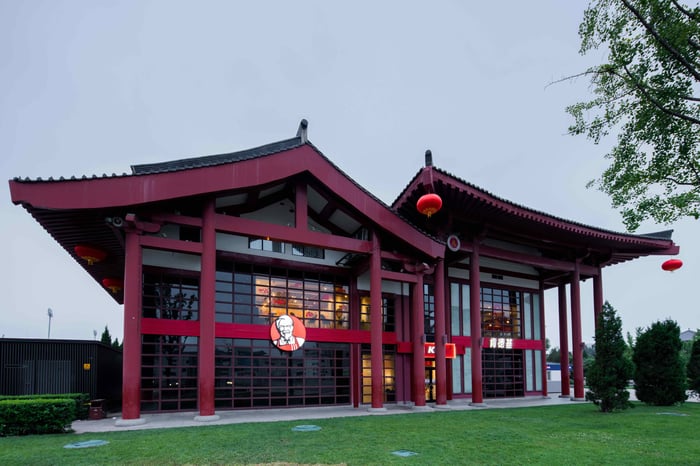 Buckets of chicken and cups of coffee

Digital payments and delivery are a huge part of emerging Chinese businesses, and Yum China's numbers in this regard are impressive. The company's digital rewards program -- topping a massive 230 million members across KFC and Pizza Hut -- is enviable even for one of the biggest and best restaurant operators in the world. Food delivery accounted for 20% of sales in the third quarter, a huge number considering researcher McKinsey estimates 4% of restaurant food sales are delivered worldwide.

That is perhaps appropriate, though, as Yum China CEO Joey Wat often states that her company's goal is to be the most innovative restaurant manager in the world, not just a seller of fried chicken and pizza. Its progress in digital and delivery are at the heart of the growth strategy, which pegs total restaurant count at "eventually" 20,000. That would put this already huge restaurant chain in contention for being one of the largest on the planet.

But delivering food -- especially as a licensee -- may not be enough for Yum China to fully realize its aspirations. To this end, Yum China is acquiring a controlling interest in hot pot restaurateur Huang Ji Huang, which has 640 locations across the country. It has also been opening locations of its own coffee start-up, COFFii & JOY, at a feverish pace to compete in China's emerging coffee culture. And Yum China's investment in e-commerce start-up Meituan Dianping also added a few cents to earnings in Q3.

In all, it may have been a more sluggish report card than investors hoped for, but Yum China is still growing in spite of serious headwinds buffeting the Chinese economy. Over the longer term, though, there remains plenty of upward potential for this chain.