Please ensure Javascript is enabled for purposes of website accessibility
Log In Help Join The Motley Fool
Free Article Join Over 1 Million Premium Members And Get More In-Depth Stock Guidance and Research
By Ryan Downie - Nov 4, 2019 at 11:29AM

As a market downturn becomes more likely, investors will want to identify and assess tobacco stocks that provide downside cushion.

Smokeless alternatives, a more health-conscious population, and regulations in key markets all threaten cigarette makers. Nonetheless, the $888 billion industry is expected to expand 4% on average each year to $1.124 trillion in 2024. Rising disposable income in much of the developing world is driving the adoption of premium tobacco products.

Cigarettes are famously among the consumer staples for which demand remains stable during recessions. Due in part to moral objections to these products, many investors avoid tobacco companies altogether, which results in attractive valuations and high-dividend yields. As a result, these make a compelling financial case for portfolios as a recession approaches. 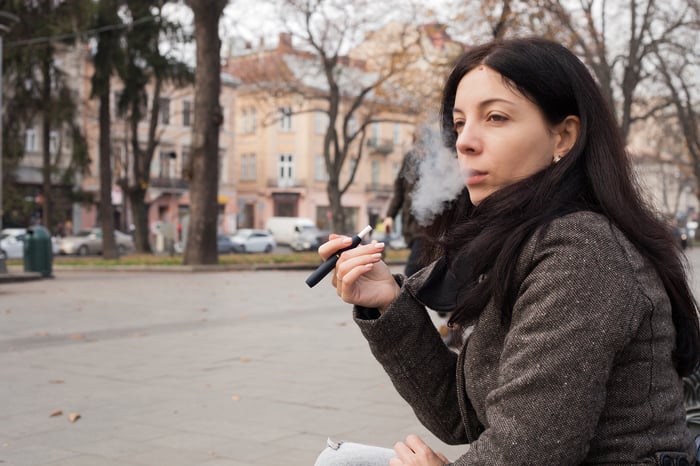 A number of popular valuation metrics demonstrate that tobacco companies trade at a discount to other industries. The weighted average EV/EBITDA for the broader market is 14.77, but the same metric is 13.8 for Philip Morris, 9.77 for British American, and 10.52 for Altria.

Forward price-to-earnings for Altria and British American are both under 10, which looks great compared to the 26.9 average multiples across other industries. It should be noted that this gap closes when adjusting for growth, as tobacco's PEG ratios align with the market average, meaning that variations in growth assumptions can explain the variations in price-to-earnings ratios.

The total market's dividend yield is around 2%, and the historical average has been around 4.5%. Philip Morris returns the lowest yield of the major tobacco companies at 5.81%, and British American leads the way at 7.82%, so these are great options for dividend income that can bridge the gap to price returns if the market heads downward in the future.

While British American has lagged its peers in terms of operating efficiency (the company's ROA and ROIC do not compare well, despite comparable margins), and there could be increased risk owing to a low current ratio, British American stands out as the best opportunity to gain exposure to the tobacco industry in the medium term. While speculation about the growth potential of smokeless products like Juul and IQOS could shift the balance of power, more consumer taste and regulatory risks are likely to arise as more research is conducted on their safety and side effects.

All three major players have comparable growth and profitability outlooks, and they should experience very similar macroeconomic growth drivers. British American delivers overall comparable exposure at a substantial valuation discount, and a 7.82% dividend yield, which is enticing. For investors who can reconcile any moral issues with cigarette makers, these are excellent stocks to provide returns in an uncertain period of the economic cycle.