This food giant has had a good year so far.

On Oct. 17, Swiss multinational food and beverage conglomerate Nestle (NSRGY 0.60%) announced that it will launch a buyback plan that could total as much as 20 billion Swiss francs ($20.2 billion at today's exchange rate) by 2022. It's another sign that CEO Mark Schneider is determined to boost the company's value to shareholders. Since Schneider took over three years ago, Nestle has purchased interests in several companies and cut jobs as part of an effort to improve growth and corporate profit margins.

With the $10 billion in cash from the sale of its Skin Health division in October, Nestle will start the buyback plan in January and may also issue special dividends over the next three years.

The food giant's shares have continued to perform well

Nestle says it is the world's largest food and beverage company, with 308,000 employees and 413 factories in 83 countries. It had sales of 91.4 billion Swiss francs in 2018, a 2%  year-over-year increase.  It sells 2,000 brands and is perhaps best-known for brands including Gerber baby food, Perrier bottled water, KitKat candy bars, Nestle Toll House chocolate chips, and frozen-food brands Hot Pockets, Stouffer's, DiGiorno, and Lean Cuisine. 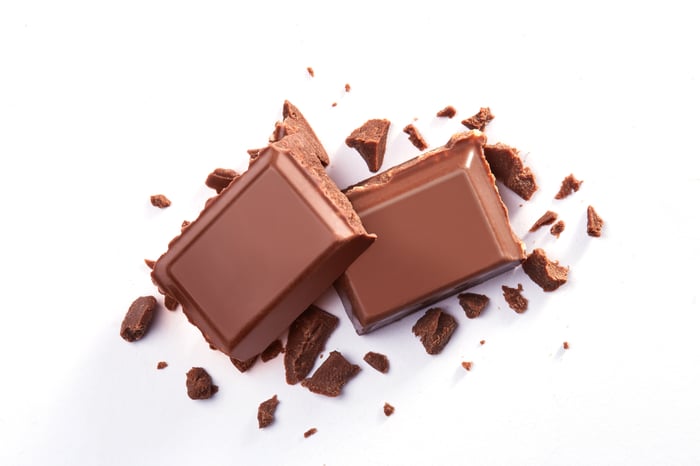 Investors have responded positively to Schneider's initiatives as well as to continuing growth in Nestle sales overall. Shares are up 45% over the past three years. In October, Nestle announced that total reported sales increased 2.9% in the previous nine months to 68.4 billion Swiss francs. With the stock falling recently to around $106 per share, it has still posted year-to-date gains of 32.9% and an average annual return of around 15% for the past three years. In addition, Nestle pays an annual dividend of $2.43 per share, which works out to a yield of about 2.3%.

Sales of packaged food products worldwide are estimated to hit $2.6 trillion by the end of 2019, according to data gathered by Statista, yet growth has been only fair, with a projected compound annual growth rate (CAGR) of 2.2% through 2022, according to an article posted by the Institute of Food Technologists.

One example of how lifestyle changes have impacted the Swiss conglomerate is in sales of bottled water. The company recently announced plans for a major restructuring of its bottled water division, Nestle Waters, which in the just-reported nine-month period saw sales decline from the year-ago period. "Growth in water remained subdued, reflecting high pricing comparables and a disappointing summer season in Europe," said the company in a press release.

Changing attitudes toward the use of plastic bottles for water, due to concern over the environment, have played a role in pressure on the market.

Yet with a huge selection of brands sold in 190 countries, and annual sales growing, Nestle has seen its EBITDA jump from $13.4 billion in 2017 to $17.9 billion at the end of last year -- and the stock has followed suit, gaining 30% in the past year compared to 13.4% for the S&P 500. Over the past five years, the company has averaged an annual return of 9.6%. Nestle shares are a bit expensive at current prices, with a forward price-to-earnings ratio of 21, but it will likely continue its dominance of the food and beverage industry worldwide. https://finance.yahoo.com/quote/NSRGY/financials?p=NSRGY

How Starbucks and Nestle are Benefiting From Their "Coffee Alliance"
413%