Shares of Texas-focused energy companies Callon Petroleum (CPE 0.25%) and Carrizo Oil & Gas (CRZO) both rallied more than 10% by 11:15 a.m. EST on Tuesday. Lifting these two oil stocks, which are in the process of merging, was their expectation-beating third-quarter reports.

Callon and Carrizo are in the midst of a hotly contested merger. Callon initially agreed to an all-stock deal to buy Carrizo for $3.2 billion in July. But activist investors have criticized the transaction and are working on getting other shareholders to vote against the deal on Nov. 14. 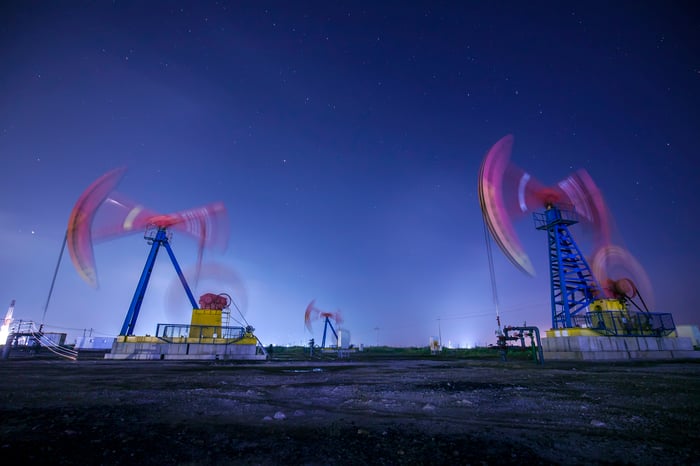 The companies made their case for the combination by posting strong third-quarter results. Carrizo generated $0.69 per share of adjusted earnings, which beat the analysts' consensus estimate by $0.06. Meanwhile, Callon earned an adjusted $0.19 per share, which came in $0.01 per share ahead of expectations. Those stronger profits came even though oil and gas prices were weaker during the quarter.

Fueling their higher profits was a healthy uptick in production. Carrizo's rose 8% year over year to 69,971 barrels of oil equivalent per day (BOE/D), fueled by a 12% jump in higher-margin oil volumes. Callon's output also rose 8% year over year, averaging 37,800 BOE/D during the quarter. That growth came even though the company sold its Southern Midland Basin assets. Without that negative impact, its output would have jumped 25% year over year.

The strong showing by both companies leads them to believe that they'll deliver even better results as a combined entity. That's because they can further reduce costs to generate more free cash, which will improve their balance sheet.

Both Callon and Carrizo delivered strong results in the third quarter despite challenging conditions due to weaker oil and gas prices. Because of that, they believe that by combining, they can produce even better results. Several major investors aren't yet persuaded, and they plan to vote against the deal later this month. What's unclear is if the strong showing by these oil companies in the third quarter will win over enough investors to approve the merger. That uncertainty makes them interesting oil stocks to keep an eye on this month.