Cigarette makers Philip Morris (NYSE:PM) and Altria (NYSE:MO) called off merger talks in late September. The merger made a lot of sense, but the timing was less than ideal. For now, Philip Morris will move ahead on its own through the ever turbulent tobacco industry environment. The sector today has several cross-currents to deal with, but Philip Morris' strategy, even without Altria, appears to have a strong tailwind.

Philip Morris was a spin-off from Altria in 2008. Altria controls the U.S. market, and Philip Morris controls everything outside the U.S. The split was originally done for litigation reasons, which have since died down. Thus the two companies know each other very well, and in fact market many of the same brands including Marlboro, the No. 1 brand in both the U.S. and internationally. 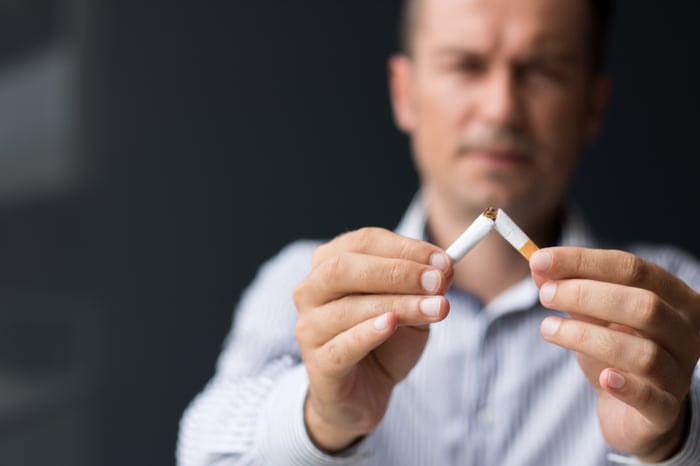 The merger talks were called off due to poor investor sentiment over the intense and growing political and regulatory scrutiny surrounding the recent eruption of vaping-related illnesses and deaths. Thus, for the foreseeable future, Philip Morris will be forging ahead on its own. On Oct. 17, Philip Morris released its third-quarter results. Let's reassess what the future looks like for Philip Morris. Is it a good tobacco stock to buy today?

Philip Morris' slogan is "Delivering a Smoke-Free Future." It's main product to forge that future is called IQOS, an acronym that stands for I Quit Ordinary Smoking. IQOS is a heated tobacco product, but not a combustion one such as a traditional cigarette. But IQOS is not a traditional vaping product either. It has similarities to an e-cigarette, but is more similar to smoking and actually uses tobacco, where vaping products just use flavored liquid pods.

Philip Morris will also be introducing a vaping product around the end of the year. Management believes there is not a single product or platform that will appeal to all smokers, thus a portfolio of reduced risk products and platforms will be necessary.

IQOS heats the tobacco to about 350 degrees and releases the nicotine, but the tobacco doesn't burn. A traditional cigarette burns tobacco at around 600 degrees. The hotter temperature allows for many more chemicals and toxins to be vaporized and released into the smoke.

With the recent approval of IQOS in the U.S., where Altria is Philip Morris' marketing partner on the product, the U.S. Food and Drug Administration said, "The agency found that the aerosol produced by the IQOS Tobacco Heating System contains fewer toxic chemicals than cigarette smoke, and many of the toxins identified are present at lower levels than in cigarette smoke." It also said, "following a rigorous science-based review through the premarket tobacco product application (PMTA) pathway, the agency determined that authorizing these products for the U.S. market is appropriate for the protection of the public health." Philip Morris is referring to these new products as reduced risk products (RRP). They are not risk-free products, but safer alternatives to traditional smoking.

IQOS currently has more than 12 million users with almost 9 million of them completely converted from traditional smoking. IQOS is currently available in 51 markets including the U.S. In markets where IQOS has been launched, IQOS already collectively has a 5.1% market share, making it the fourth largest product. This compares to the leading brand Marlboro which has 10.8% market share. IQOS made up about 8% of total unit volumes in the third quarter and grew 85% year-over-year. In comparison traditional cigarette volume fell 5.9%; combined volume declined 2.1%. Global market share held firm at 28.8%.

With a current dividend yield of 5.6% and earnings growth of 8%, assuming a constant multiple, Philip Morris should yield a total return of over 13%. Trading at a little over 14 times forward earnings, this represents a very reasonable entry price for a high-quality, dominant player in the tobacco industry.

Sure, the traditional tobacco market is in decline. But the future for Philip Morris is in its reduced risk products. Right now, it's showing good momentum. As Philip Morris continues to roll-out its IQOS product and launches its e-cigarette product, the momentum should continue. Philip Morris may just deliver a smoke-free future while being a scorching hot stock for investors.