Shares of Chesapeake Energy (OTC:CHKA.Q) finished down almost 30% on Nov. 6. Today's sell-off is a continuation of yesterday's drop, following the release of the Chesapeake's third-quarter results before the market opened.

Yesterday the company reported that it lost almost $190 million on an adjusted basis, or an $0.11 loss per share. That was even bigger than the estimates, and it reflected a combination of Chesapeake's ongoing struggles with low oil and natural gas prices and a decline in volumes after having sold off some assets over the past year -- yet another example of how oil and gas producers are one of the most difficult investments in the energy industry to get right. 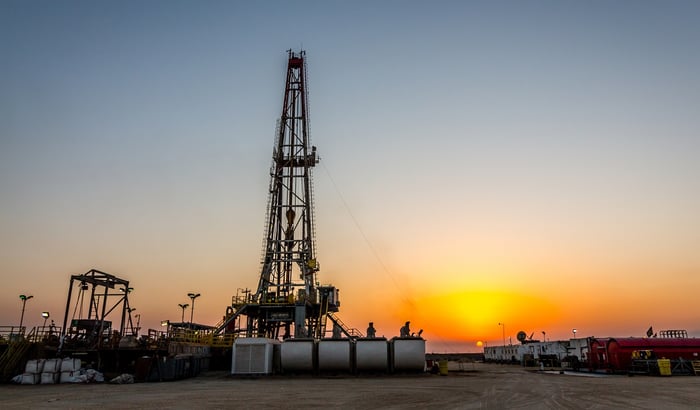 So why are investors selling off so heavily today, after having given up almost 18% yesterday? In short, because investors have had a little time to fully adsorb this sentence from its quarterly earnings report:

We're talking about a domino-effect of defaults that would be devastating. Part of its debt is secured by collateral that would be foreclosed on, further limiting the company's ability to service its debt, and Chesapeake would almost certainly become insolvent. And when public companies become insolvent, common shareholders go to the end of the line, whether it's liquidation or reorganization. Put it all together, and today's sell-off is the reaction of a lot of investors who don't expect the company will be able to turn things around.

Frankly, it's going to be incredibly difficult for Chesapeake to survive without, at the very least, going through bankruptcy and emerging without the weight of so much debt. If that happens, common shareholders will get wiped out, or very close to it. Based on that risk, I think investors would do well to avoid the company for now.