Shares of the home-services specialist bounced on a strong earnings report.

Shares of ANGI Homeservices (ANGI) were climbing this year as the company turned in a solid third-quarter earnings report, posting better-than-expected results on both the top and bottom lines. As of 1:49 p.m. EST, the stock was up 19.4%.

The company, which provides an online marketplace for homeowners to get everything done from cleaning to plumbing to general contracting, said adjusted revenue jumped 22% in the third quarter to $357.4 million, its fastest growth rate since it merged HomeAdvisor and Angie's List in 2017, and ahead of estimates at $355.6 million. 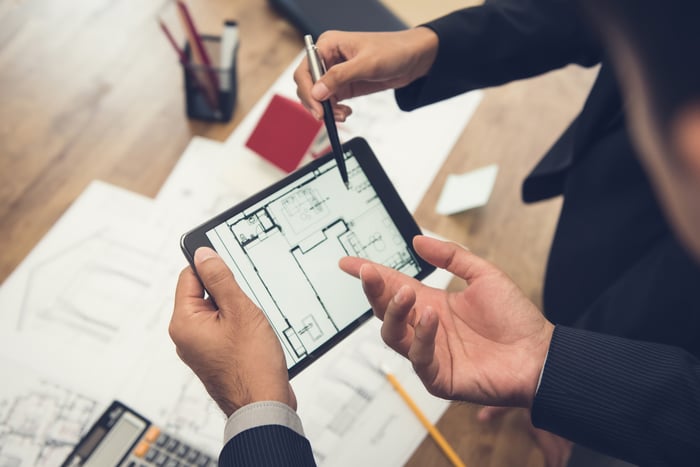 The HomeAdvisor parent was able to resolve an issue it had in the second quarter around overspending in paid search and also ramped up its Fixed Price offerings, one of its key growth initiatives, as it now offers customers simple pricing on 133 different service categories, allowing customers to find a service provider with just a few clicks.

Operating income in the quarter fell 26% to $24.7 million as the company sharply increased sales and marketing spending to support its recently acquired platforms, Handy and Fixd, as well as the expanded Fixed Price program.

On the bottom line, earnings per share fell by a penny to $0.04, but that still beat analyst expectations at $0.02.

On the earnings call, CEO Brandon Ridenour touted the strong potential of the Fixed Price offering and said that Angie's List returned to revenue growth for the first time since the merger. He also said the company finished the quarter with strong momentum in its two core businesses, HomeAdvisor and Angie's List, as the HomeAdvisor-centered marketplace saw revenue grow 27% in the period.

Looking ahead, management said it expected adjusted revenue growth of 20% for the fourth quarter.

ANGI warned that margins could tighten in 2020 as it continues to beef up the Fixed Price service but that it was optimistic that it would deliver increased profitability over the medium to long term. On the top line, it expected solid growth next year, in line with its 20% to 25% long-term forecast.

With the stock still down close to 60% over the last year, the solid third-quarter report and upbeat top-line guidance were clearly a breath of fresh air for investors, so it's not surprising to see the stock moving higher.

ANGI Homeservices Keeps its Focus on the Long-Term

5 Top Stocks to Buy in February