Shares of ANGI Homeservices (NASDAQ:ANGI) plummeted 47.3% in 2019, according to data from S&P Global Market Intelligence, in stark contrast to the S&P 500's 31.5% total return (including dividends). The home-services marketplace leader's disappointing fiscal second-quarter update in early August, which caused shares to plunge more than 25% in a single day, was largely to blame for that harrowing decline. 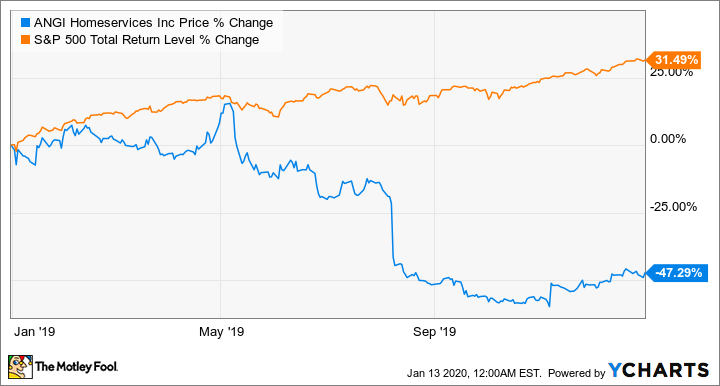 ANGI's Q2 results didn't look bad at first glance -- revenue climbed 17% year over year to $343.9 million, and pro forma revenue (which excludes the divestment of Felix at the end of 2018) rose 20%. But that also translated to narrow earnings of $0.01 per share, down from $0.05 per share a year earlier. And analysts, on average, were looking for earnings of $0.02 per share on revenue closer to $351 million.

Even more concerning, ANGI lowered its full-year outlook to call for adjusted revenue growth in the range of 20% to 25% (down from 25% previously), and for adjusted earnings before interest, taxes, depreciation, and amortization (EBITDA) of $200 million to $230 million (down from $280 million to $300 million before). According to ANGI management during the subsequent conference call, algorithmic changes at Google -- from which the company was acquiring around 40% of its customers at the time -- were partly to blame. These drove higher paid traffic to its sites and substantially increased marketing costs.

That said, ANGI offered a light at the end of the tunnel in November, soaring more than 19% in a single day after its better-than-expected third-quarter report. Adjusted Q3 revenue grew 22% to $357.4 million, translating to net earnings of $18 million, or $0.04 per share. Both figures were well above estimates for earnings of $0.02 per share on revenue of $355.6 million.

Within that total, ANGI said its core marketplace segment saw growth of 27%, spurred by a 19% increase in service requests, to 7.6 million.

ANGI also most recently reiterated its full-year revenue outlook, while narrowing its target for adjusted EBITDA to a range from $200 million to $205 million. This time, however, management said they were working to invest more aggressively in the company's budding Fixed Price platform -- a significant long-term opportunity that appears to have appeased investors' concerns over near-term growth.

It should be interesting, then, to see what ANGI Homeservices has to say about its revenue growth and margin profile when the company releases fourth-quarter 2019 results early next month. If it shows progress improving on those ends, last year's steep plunge might just make ANGI a top stock in the making for 2020.