Please ensure Javascript is enabled for purposes of website accessibility
Log In Help Join The Motley Fool
Free Article Join Over 1 Million Premium Members And Get More In-Depth Stock Guidance and Research
By Jeremy Bowman - Updated Feb 8, 2020 at 10:39AM

The stock fell on its earnings report, but the future still looks bright.

The company, which owns home improvement sites including HomeAdvisor, Angie's List, and Handy, said that revenue from continuing operations rose 19% to $321.5 million, but missed analyst expectations at $329 million. Its online marketplace, which is made up of HomeAdvisor and Handy, grew revenue 23%, while Angie's List returned to growth with the advertising segment increasing revenue 10%.

On the cost side, ANGI stepped up its strategic marketing investments as marketing spending rose 32.7% to $166.2 million, taking up more than half of its revenue. As a result, adjusted earnings per share fell from $0.07 to break-even, which matched the analyst consensus.

Looking ahead, the company forecasted adjusted EBITDA of $200 million to $250 million, which compares to $202.3 million in 2019. However, the market may have been hoping for stronger growth as ANGI also stuck by its long-term revenue target of 20%-25% annual revenue growth. The stock, which is majority-owned by IAC (IAC), was trading down around 5% immediately after the report, though management had said previously that 2020 would be an investment year. Nonetheless, the company is making progress. Let's take a look at the key growth areas ANGI is focusing on for 2020. 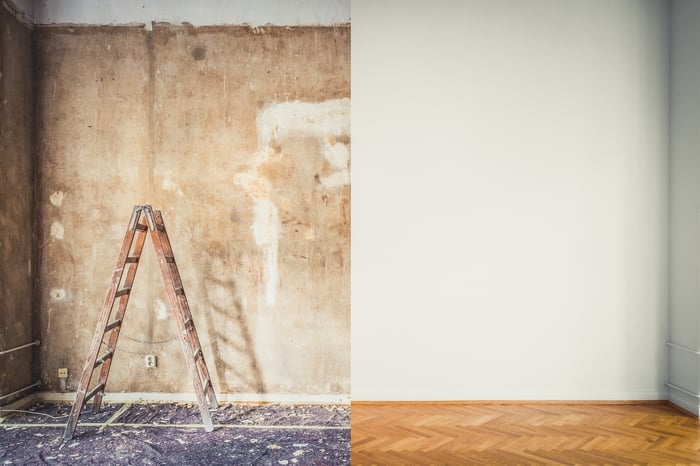 As IAC CEO Joey Levin explained in its letter to shareholders, "Last year we generated requests worth over $10 billion of job value that we couldn't fulfill because we're only able to offer a busy service professional a chance to win a job as opposed to a guarantee of actual work." The fixed-price service helps solve that problem and unlocks another component in the $400 billion addressable market in home services.

ANGI already has expanded its fixed-price services to 150 of its 500 product categories, but most of those are low-priced jobs like house cleaning or handyman work. In 2020, the company will add mid-priced jobs like fencing, or building a deck, which carry price points in a range of $1,000-$10,000. CEO Brandon Ridenour explained that those jobs are more challenging for the fixed-price platform than low-priced jobs, since there is more variability and price sensitivity, but the payoff is obviously for ANGI.

He sees fixed-price as a way of executing on multiple goals for the company as it builds customer retention and higher profitability at the same time, though building out those services requires investing in the platform to build out the capability.

While ANGI's business is primarily focused in North America, the company also has a significant presence in Europe, where it owns the top online home marketplace brand in Germany, France, and the Netherlands, has one of the top three in the U.K., and is a nascent brand in Italy. Combined, the total addressable market is similar to North America; online home services are at an earlier position in the growth curve there.

In the most recent quarter, sales in Europe grew 1% to $17.2 million, which seems to indicate a need to invest in the market. In 2020, the company plans to spend more on marketing and will replatform its site in France. Though there are unique challenges in Europe related to language and culture, ANGI should be able to apply some of the lessons it's learned in its home market.

Overall, the company expects marketing spending to slow down, meaning it will gain leverage on its most expensive line item as well as in other fixed expenses, giving it more money to invest in the categories.

Though investors may be disappointed with ANGI's guidance for 2020, investing in fixed-price and international now should pay off down the road.

5 Top Stocks to Buy in February