Shares of Micron Technology (NASDAQ:MU) rose 11% in October 2019, according to data from S&P Global Market Intelligence. The maker of computer memory chips and related storage products came off of a harsh earnings reaction near the end of September, regaining some momentum thanks to signs of improving market conditions in Micron's most important sectors.

The bulk of Micron's October gains arrived in the second half of the month, when Bernstein analyst Mark Newman published a rosy analysis of the memory market's street-price trends.

Micron and its peers in the memory sector have reduced their production volumes recently in response to weaker sell-through prices on memory chips. These actions have resulted in low supply and rising demand, serving to stabilize the pricing picture. That's exactly why the suppliers tapped the brakes in the first place, and this fiscal discipline is starting to pay dividends. 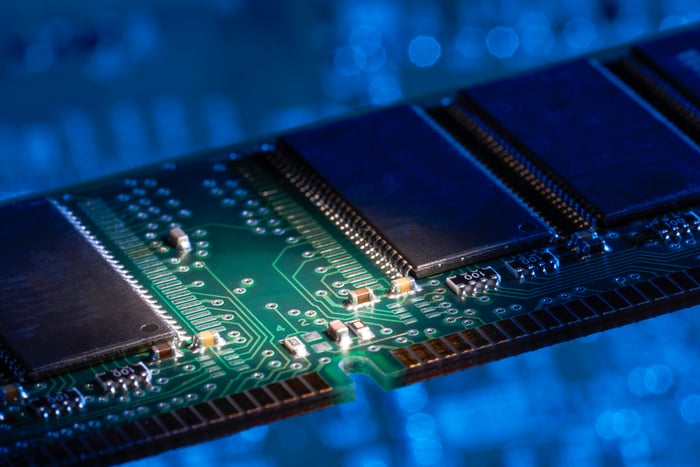 Smartphones and other devices connecting to 5G wireless networks in 2020 and beyond will require at least 50% more memory than their 4G cousins, according to a late-October statement by Micron's chief business officer, Sumit Sudana. In an interview with Barron's Eric Savitz, Sudana said that sales of 5G phones "will have a sustained positive impact on demand" in the second half of 2020.

As a Micron shareholder myself, it's good to see that the productivity slowdown is having the intended effect. All things considered, Micron is on a roll with share prices sitting 5% below their 52-week highs, with a serious surge lurking just around the corner if the 5G thesis plays out next year. I really can't think of many tech stocks better positioned for strong near-term returns than Micron right now.