Please ensure Javascript is enabled for purposes of website accessibility
Free Article Join Over 1 Million Premium Members And Get More In-Depth Stock Guidance and Research
By David Jagielski - Nov 9, 2019 at 6:15AM

Should investors steer clear of the troubled social media giant and invest in the growing Japanese company instead?

In a battle for eyeballs and daily active users, Facebook ( FB -2.24% ) and Line Corp ( LN ) are two intriguing options for tech investors to consider. While Facebook is the much more established brand, it's also facing many challenges ahead, and Line Corp may have a lot more room to grow. But let's take a closer look at how these companies have performed recently to see which one is the better buy today.

Is there enough growth at Line Corp for investors to ignore its recent losses?

Japanese-based Line Corp offers investors the ability to get in on what's still a fairly small-sized tech stock, with a market cap of a little more than $9 billion. In the mobile messaging company's most recent quarter, sales were up by just 10.6% year over year, with advertising revenues being a key driver in that. The concern for investors, however, is that the company's other segments, while they offer some diversification, haven't delivered much in the way of growth. Content is the next-biggest piece of the company's sales behind ads and it was flat from the prior year, as were communication revenues.

Line Corp's app has shown strong growth over the past year as shopping transactions have increased by 83%. However, its monthly active users have declined from 165 million to 164 million and its operating margin -- what the company has left over after its operating expenses -- fell to a negative 9.9%. 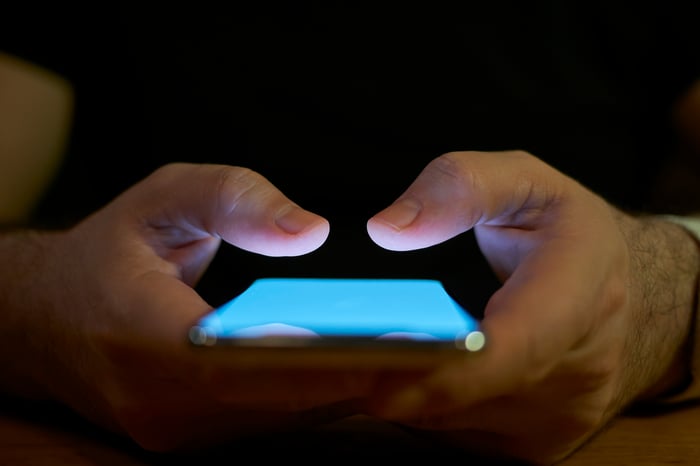 The company has been venturing off into offering different types of services, the most recent being Line Pocket Money, which is a loan service that makes it easy for users to borrow money right from within the app.  It's another good growth avenue for the company that could help increase its growth rate, but, unfortunately, it may not matter if the app continues to lose users.

Facebook continues to dominate, coming off a strong earnings beat

Facebook also released its Q3 earnings report recently which saw its revenues climb by 29% year over year as it beat expectations in all major categories, including earnings and daily active users. Its monthly active users were in line with what analysts were forecasting -- 2.45 billion and were nearly 15 times Line Corp's monthly user base. However, the company is expecting its strong growth numbers to fall and analysts are projecting it to be 24% in Q4 and to 22% for all of next year.

With more competitors vying for ad space, Facebook running into issues relating to data privacy, and just the sheer size of the social media company, there are many obstacles that are going to make a higher growth rate more difficult to maintain. Facebook is also going to be under the microscope with a federal election now just a year away as it'll be a big test for the company to see how far it has come in keeping out fake news.

Which stock is the better option today?

Facebook is a profit machine, amassing more than $22 billion in net income for all of 2018. The only thing that could derail the stock is another data privacy scandal, and that's certainly what many investors will be keeping an eye out for -- whether Facebook can stay out of trouble with regulators once and for all.

While Line Corp may have a lot more potential over the long term, it's far from a risk-free investment, either. With negative free cash flow over the past two years, the growth initiatives haven't been paying off for the company, and it's not certain that they will at this point.

Overall, Facebook is the safer, more predictable growth option for investors. Not only does it have better numbers today, but its growth could continue to outperform Line Corp for the foreseeable future.