Heating ventilation and air conditioning (HVAC) company Ingersoll-Rand (NYSE:TT) and security lock and door company Allegion (NYSE:ALLE) have a lot in common. Not only were the once part of the same company (Allegion was spun out of Ingersoll-Rand in 2013) , but they're both also trading at all-time highs, having risen more than 40% in 2019 so far. There's a lot to like about both stocks, but should investors be chasing them higher?

To get a flavor for what's happening in 2019, here's a look at the progression of both companies' revenue and earnings outlook. Both companies have raised earnings guidance through the year, but it hasn't been accompanied by an increase in organic revenue growth expectations. In a nutshell, the companies have improved their overall revenue growth prospects because they've been growing revenue in the places that really matter.

Specifically, Ingersoll-Rand's commercial HVAC operations have exceeded expectations, as have Allegion's Americas operations. Both facts augur well for their long-term aspirations and investors, and the market has responded by aggressively buying the stocks. Here's a look at some full-year guidance figures.

Starting with Ingersoll-Rand, the key to its long-term prospects is its commercial HVAC operations. The company currently reports out of two segments, with the climate segment -- consisting of commercial and residential HVAC and transport refrigeration -- contributing more than 81% of segment profit in 2018. The rest comes from an industrial segment containing an odd collection of businesses, including air and gas compressors, fluid management systems, power tools, and golf carts.

However, the industrial segment is set to be separated and then combined with Gardner Denver (NYSE:IR) in early 2020, meaning the climate segment is the key to the remaining company's future prospects. Fortunately, it's here where the outperformance lies in 2019. For example, Ingersoll-Rand now expects its climate segment to grow organic revenue by 7% to 7.5% in 2019,  compared with its initial forecast for 5%-6% growth. In contrast, the industrial segment's organic revenue is now expected to be anywhere from flat to up 0.5% in 2019, compared with an initial forecast of 4.5%-5.5%. 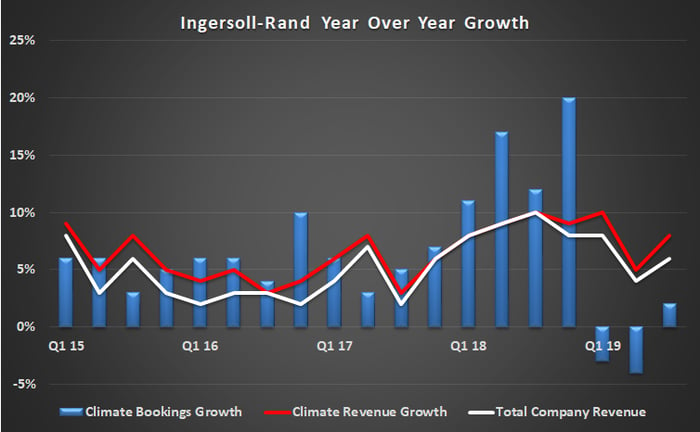 As for valuation matters, management expects $6.40 in adjusted EPS in 2019, with free cash flow (FCF) in excess of that figure.  As a conservative basis, Ingersoll-Rand currently trades at around 20 times earnings and FCF multiples.

That's a good value for a company growing its core business orders in the double digits. Meanwhile, the industrial segment separation will increase its focus on HVAC and potentially prepare the company to be part of anticipated industry consolidation. All told, Ingersoll-Rand remains a good value.

The security door and locks company has exciting long-term growth prospects because of the ongoing convergence of mechanical and electronic doors and locks. While the market may not immediately strike investors as a play on the growth in the Internet of Things (IoT) the fact is that IoT connectivity in locks and doors will enable residences and commercial sites to better monitor and control who is where within a site -- a key benefit in the fight against crime.

Indeed, customers in the Americas region continue to adopt such solutions. That's good news, because the region was responsible for 91% of segment earnings in 2018 before corporate costs in 2018. Allegion started the year expecting 5%-6% full-year organic revenue growth in the Americas region, only to upgrade expectations 5.75%-6.25%. 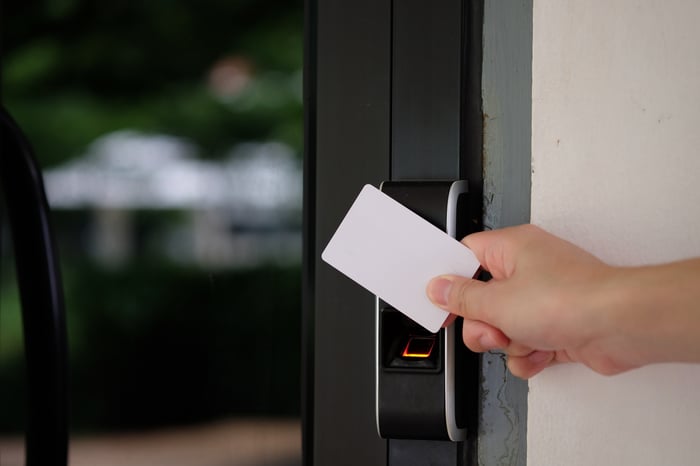 Just as with Ingersoll-Rand, Allegion is growing where it matters. During the recent earnings call, CEO David Petratis declared himself "confident in what we see over the next nine to 12 months."

However, based on analyst estimates, Allegion trades at 24 times 2019 earnings, 22 times 2020 earnings, and 26 times 2019 FCF. Frankly, the stock is starting to look fully valued, and the upside might be limited from here.

Can these stocks heat up even more?

All told, both companies remain attractive. Allegion's strong rise suggests it's now close to a fair value while Ingersoll-Rand looks as if it still has some room to run. Nevertheless, both stocks are worth monitoring, especially if weakness in the overall stock market brings their stock prices lower.