Please ensure Javascript is enabled for purposes of website accessibility
Free Article Join Over 1 Million Premium Members And Get More In-Depth Stock Guidance and Research
By Scott Levine - Nov 12, 2019 at 7:08AM

Record-setting output, growing cash flow, and a corporate restructuring inspired investors to pick up shares of these miners.

Shares of gold miners Agnico Eagle Mines ( AEM -3.45% ), AngloGold Ashanti ( AU 0.81% ), and Sibanye-Stillwater ( SBSW ) rose 15%, 21%, and 42%, respectively, in October, according to data from S&P Global Market Intelligence. It's unsurprising that these stocks climbed considering the price of gold rose more than 1.7%; there's a natural strong correlation between the movements of the commodity's price and the share prices of its extractors. But that wasn't the only factor inspiring investors to buy up these stocks.

Investors were enthusiastic about the third-quarter earnings reports of Agnico Eagle and AngloGold Ashanti, and found reasons for optimism in Sibanye-Stillwater's announcement of a restructuring. 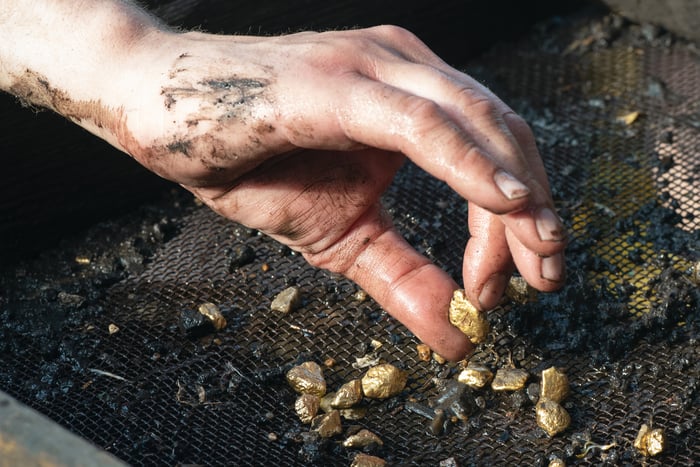 Those glittering performances weren't the only reasons investors picked up the miner's shares last month. Agnico Eagle reported a notable 153% year-over-year increase in operational cash flow due to higher gold prices. Management also provided a more auspicious outlook for 2019, upwardly revising the gold production outlook from 1.75 million ounces to approximately 1.775 million ounces. And -- the icing on the cake -- management raised the quarterly dividend 40% to $0.175 per share.

AngloGold Ashanti made more with less

When Goldman Sachs upgraded AngloGold Ashanti's stock from neutral to buy in the middle of October, that may have motivated some investors to add the gold mining company to their portfolios; however, it was the Q3 report the company delivered later in the month that proved the greater source of motivation. Although AngloGold Ashanti reported a 3% year-over-year decrease in gold production for the quarter, onlookers didn't characterize the performance as lackluster. Instead, they placed greater emphasis on the miner's cash flow statement, which showed $354 million in operational cash flow and $87 million in free cash flow, up 65% and 156%, respectively.

Provided an additional cause for celebration was the adjusted net debt figure, which fell 6% from $1.75 billion at the end of Q3 2018 to $1.65 billion at the end of Q3 2019. Moreover, the reduced its reliance on leverage, ending Q3 with an adjusted net debt-to-adjusted EBITDA ratio of 1.06 compared to 1.13 a year prior. Management reiterated its commitment to deleveraging further, targeting a ratio of 1.

Early in October, Sibanye Gold, of which Sibanye-Stillwater is a wholly owned subsidiary, announced that it would commence an internal restructuring process with the goal of creating "a more efficient Group structure." Once that restructuring is complete, Sibanye-Stillwater will serve as the holding company for the group. News of the plan was received favorably, as shareholder value has dwindled for several years even as the price of gold has risen. 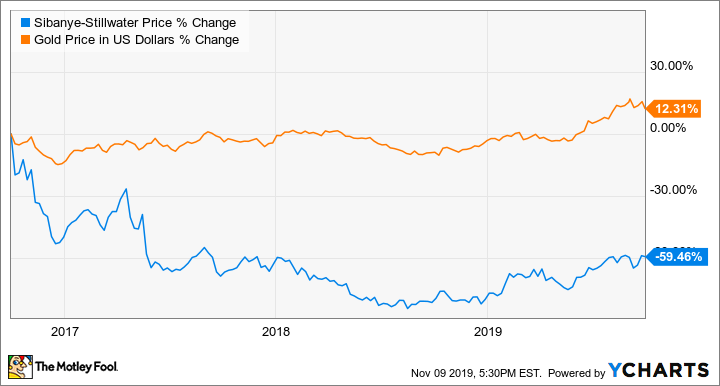 And at the end of the month, investors rejoiced at the news that Sibanye-Stillwater is considering moving the primary listing of its stock to the New York Stock Exchange from the Johannesburg Stock Exchange. "No firm decision has been made," CEO Neal Froneman told Bloomberg, "but I think if we are to grow, we would have to change our primary listing because there is no real growth in South Africa." Froneman said that the move could come in 2021, after the company reduces its debt.

With the rise in the price of gold last month, it's hardly shocking that these mining stocks also climbed, but dig below the surface and it's clear that there were other factors at play. As 2019 winds down, investors will want to watch out for the Q4 earnings reports from Agnico Eagle and AngloGold Ashanti to see if they can continue strengthening their operational performances and improving their financials. Regarding Sibanye-Stillwater, the company's restructuring is interesting, though it might be smarter to watch the story unfold from the sidelines.