The U.S.-China trade war is turning out to be a vulnerability for Xilinx (NASDAQ:XLNX). The chipmaker had already warned that the dispute could knock the wind out of its sails, since it had to suspend its shipments to Huawei. But the company's latest results show the extent to which trade tensions are hurting the business.

The wheels are coming off

Xilinx's second-quarter net income increased 8% to $0.94 per share thanks to a 12% jump in revenue to $833 million. But that's where the good news ends.

It expects third-quarter revenue between $710 million and $740 million, missing Wall Street's expectation of $845 million by a huge margin. The chipmaker had delivered $800 million in revenue in the prior-year period, along with earnings of $0.92 per share, which means that it anticipates a 9% decline in revenue this quarter.

Moreover, the fact that Xilinx didn't provide an estimate for earnings per share adds to the uncertainty. That's not surprising, as management was sounding confident three months ago, stating that it was able to mitigate the Huawei-related losses thanks to global 5G deployments. This seemed like a logical explanation as Xilinx boasted of having no customer accounting for 10% or more of its business in the first quarter.

The company has also indicated that it was anticipating Huawei to supply no more than 6% to 8% of total revenue this fiscal year.

Xilinx had found a way to circumvent the restrictions on shipping to Huawei. It was able to ship certain products after carefully reviewing the restrictions, and had also applied to the Commerce Department for licenses in a bid to expand the number of products it can ship to the Chinese company.

But Xilinx has faced rejection from the Commerce Department, forcing it to take Huawei out of the equation. CEO Victor Peng highlighted this on the latest earnings conference call, saying, "While we expedited our application process to the Department of Commerce in early Q2, we have not received any license approvals to expand the product set permissible to sell to Huawei."

He added that Xilinx is removing "all remaining revenue expectations" from Huawei for the current fiscal year. The company now expects full-year revenue of nearly $3.25 billion at the midpoint of its guidance range, which would be a mid-single-digit improvement over its fiscal 2019 revenue.

But that's entirely different from the manner in which Xilinx had started 2019. The chipmaker was enjoying rapid top- and bottom-line growth thanks to the rollout of 5G networks. But it looks like the 5G catalyst is now cooling off. According to Peng: "Our first-half wirelessrevenue benefit from early 5G deployments, mainly in South Korea and China, and a modest amount in other markets. Our second half is more challenging given the expected based on [application-specific integrated circuit] transition and unexpected program delays with some communication customers."

The transition to application-specific integrated circuits was always going to be a headwind for Xilinx. Moreover, the unexpected delays Peng is talking about suggest that telecom companies are probably holding back their spending in light of the tepid global economic growth.

Xilinx believes that the 5G catalyst will come back as the global rollout gains momentum. However, management's tone indicates that it expects bumps along the way. Peng says that 5G presents "a significant opportunity" for Xilinx in the long run, but it will "continue to be somewhat lumpy."

It is evident that Xilinx's growth isn't going to be as attractive as it seemed just a couple of quarters ago. The trade war uncertainty and the negative macroeconomic vibes could continue to weigh on the stock.

But investors shouldn't forget that Xilinx is sitting on lucrative long-term opportunities. The company's dominance in programmable chips and fast-growing semiconductor verticals such as the automotive market could help Xilinx step on the gas once the current slowdown is over. 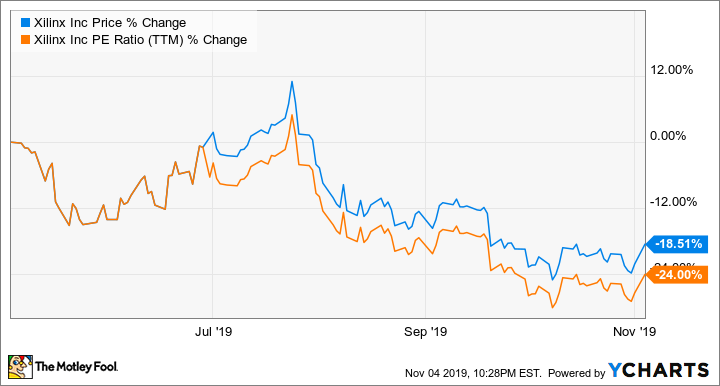 The stock has lost nearly 18% of its value in the past six months, and the price-to-earnings ratio has dropped significantly. The bad news seems already baked in as Xilinx has removed Huawei from the equation. So it might be a good idea to hold onto the stock, since it could fly once again when business conditions improve. It could return to its past as a growth stock, but it's going to take time for things to turn back in its favor.