The discount apparel retailer has fallen on hard times and will likely fall further.

Gap Stores' ( GPS 2.45% ) spinoff of discount chain Old Navy was once seen as a surefire way to realize value for shareholders of the ailing jeans and khakis retailer. But Old Navy has started to show signs of wear and tear in 2019. Now, it hardly looks better than the rest of Gap's businesses.

The fast-fashion strategy that had raised Old Navy above Gap's name-brand stores and Banana Republic seems to have run out of steam. Fast-fashion giant Forever 21 recently declared bankruptcy, while H&M has struggled to remain relevant. 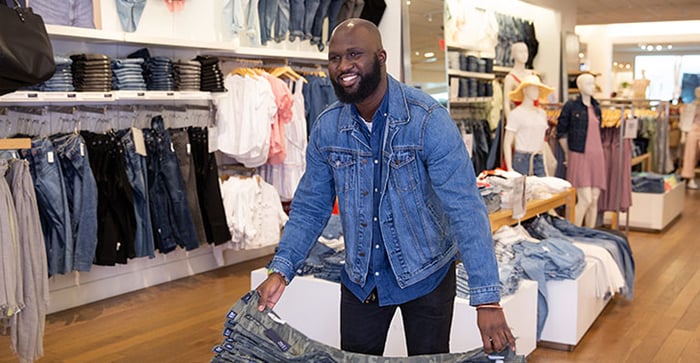 There once was a rationale for making Old Navy the flagship brand of this retail group, but that's no longer the case. And if Gap proceeds with spinning off Old Navy, as the retailer recently insisted it would, then investors should stay away from buying Old Navy shares.

A growth engine breaking down

Gap is in the midst of a major upheaval after firing CEO Art Peck because of the continued decline across all three Gap concepts. Third-quarter same-store sales for the Gap brand remained as bad as ever, down 7% -- the seventh consecutive quarter of falling same-store sales -- while Banana Republic comps were down 3%. Old Navy, which previously had been the stellar standout for Gap, posted its third straight quarter of negative comps, down 4% year over year. 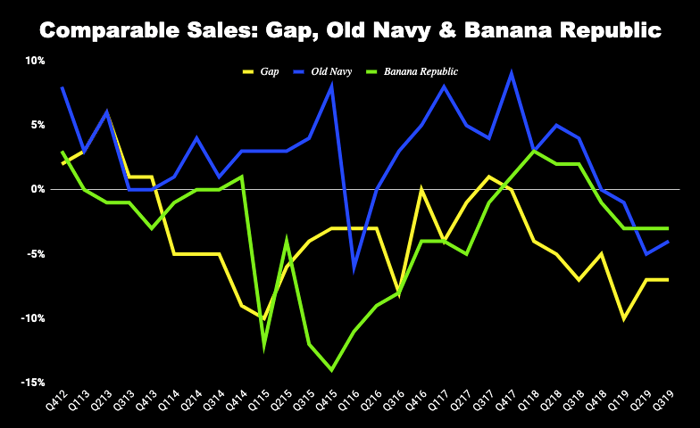 Gap has put a lot of emphasis on Old Navy over the past few years, since it had become the company's main growth driver. Revenue from the chain reached $7.9 billion last year: almost half of the retailer's total $16.6 billion. As of a few months ago, there were 1,183 company-operated Old Navy stores worldwide. Even though Gap stores still outnumber Old Navy stores -- there were 1,226 as of early August -- the Gap brand recorded sales of $5.2 billion in fiscal 2018, or about a third less than Old Navy.

The buildout of the Old Navy chain also increased Gap's liabilities. At the end of the second quarter, the retailer had $1.2 billion in long-term debt on its balance sheet, but also $6.6 billion in operating lease obligations.

It can reduce that burden by closing stores, but it's not something that can happen quickly.

Gap noted that it has nearly $1 billion worth of minimum mandatory lease payments due this year, another $1.15 billion due next year, and over $1 billion the year after. Gap does have some flexibility in shutting stores as leases expire, but it means that any downsizing will be stretched out over time, which is one reason why Gap needs a successful spinoff of Old Navy.

The separation of Old Navy could help the retailer clean up its balance sheet. Similarly, privately-held J. Crew wants to spin off its Madewell denim business. With J. Crew teetering on the edge of bankruptcy because of crushing debt, the spinoff could raise enough money to pull its parent back from the brink.

Yet whereas Madewell is actually showing strong, consistent growth, which would obviously be attractive to investors, Old Navy is now spiraling down along with the rest of Gap's business. That won't be something investors would be eager to buy into.

The outlook is bleak

There are a number of good reasons Gap should probably cancel the spinoff plan, not least because it just fired the executive overseeing the separation: the plan's biggest champion. But this rudderless ship also has no clear turnaround strategy for itself once the spinoff is complete, and now it's heading into the important holiday sales season with an outlook that is more depressed than it was.

In announcing Peck's departure, Gap said that it now expects full-year earnings per share in a range of $1.70 to $1.75 per share, down from its prior forecast of $2.05 to $2.15, as the third quarter was worse than anticipated.

With the Old Navy spinoff still on track and the company in turmoil, investors would do best to avoid this threadbare offering because there are many companies more worthy of their attention and investment dollars.