BMW (OTC:BAMXF) recently announced the pricing for the first mass-market all-electric vehicle in its Mini brand of premium compact cars. The 2020 Mini Cooper SE will arrive at U.S. dealers in March 2020, with an MSRP of $29,900 (plus an $850 destination fee). That's the price before any tax credits kick in. According to Mini, the price of the electric hatchback could get as low as $17,900 with federal, state, and local incentives if you live in an area that's especially encouraging of electric vehicles.

The Mini Cooper SE looks, well, like a Mini Cooper, and the untrained eye might not even notice that it's electric. It does have a few design cues giving away its electric powertrain, like a distinct asymmetrical wheel design specific to the SE model, a blocked-off grille, and, of course, special emblems indicating that it's electric. The fact that BMW didn't get too risky with the design is a good thing since the look of the Mini Cooper is distinct and recognizable, so when you see one of these on the road there will be no mistaking what brand it came from. The Mini Cooper SE will maintain Mini's fun-to-drive reputation, with its electric motor providing 181 horsepower and 199 lb-ft of torque with a 0-60 mph time of 6.9 seconds. Mini's range estimate for the Cooper SE is 146-168 miles (there is no official range from the EPA as of this writing) and its battery can achieve a 100% AC charge in just four hours. 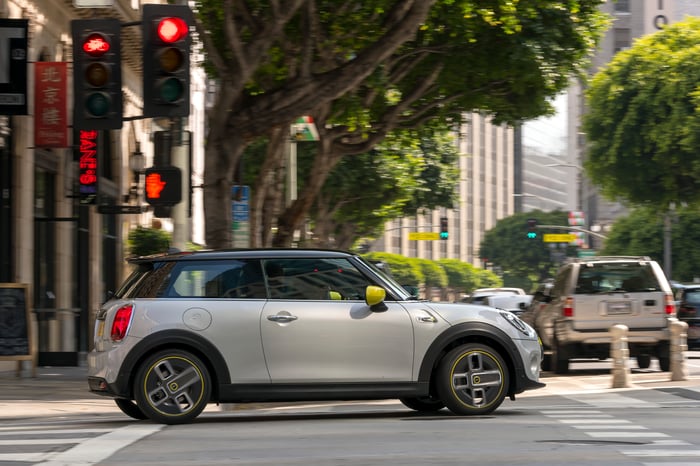 So, how does the price of the Mini Cooper SE compare to the price of some of its competitors? Like the regular gas-powered Mini Cooper, the new electric version doesn't have a whole lot of direct competitors since it's such a unique car. What we can compare it to is the Nissan Leaf, the oldest name on the market in BEVs (battery electric vehicles). The Leaf is a bigger hatchback with fewer premium features at the base level, and has a 150-mile range and a starting MSRP of $29,990 for the standard model; $36,550 for the longer-range (226 miles) Leaf Plus. The Chevy Bolt EV is similar in size, range (238 miles), and features to the Leaf Plus, and it's priced similarly, starting at $36,620. Tesla's Model 3 is a premium electric compact sedan that starts at $35,000, with its range starting at 250 miles in the base model and going up to 322 miles in the long-range model. The Model 3 and Mini Cooper SE are similar in standard features (navigation, heated front seats, etc.) but compete in different classes since the Mini is a subcompact hatchback and quite a bit smaller than the Tesla.

You've probably noticed the trend: The 2020 Mini Cooper SE is priced to undercut most of the more popular mass-market electric cars. Not only that, but its pricing isn't drastically more than that of a standard Mini Cooper Hardtop 2 Door, which starts at $23,400 (and obviously isn't eligible for the same tax credits as the EV since it's not electric). The competitive pricing of the Mini Cooper SE plus any added tax incentives give it a good shot at getting the attention it needs to be successful, assuming it's marketed well.

But what does this tell us about what we can expect for future EV pricing? The Nissan Leaf has always been the high-volume, high-value choice in electric cars, but could Mini change that? Since Mini is still a bit of a boutique brand, it probably won't see production or sales numbers as high as that of the Leaf and the Bolt, but it could get more people paying attention to the Mini brand and could influence competitors to make more small EVs to compete with it if it's successful.

A lot of automakers do a lot of talking about plans to introduce more all-electric vehicles, and new ones always seem to be right around the corner. Whether those cars ever actually make it to market is a different story. For example, GM announced in late 2017 that it would be releasing 20 new electric cars by 2023. That was two years ago, and we haven't seen any of those 20 cars yet -- not even a concept car -- at least not in the U.S. And this is just one of the more optimistic announcements we've heard from an automaker about a lot of new electric cars in a short time period that has been slow to come to fruition.

But Mini has one ready, and it'll be for sale at a reasonable price point. When the likes of GM, Ford, and Volkswagen eventually do bring their promised EVs to market (like Ford's "Mustang-inspired" electric SUV, unveiled this week and arriving late next year), it's possible that Mini's lower-price-point premium electric compact could spawn similar competitors in the form of more small electric hatchbacks in the sub-$30k price range. Who knows, we could even see a Tesla slotted below the Model 3 as a new affordable entry-level model. That's exactly the kind of healthy competition industry-watchers and investors like to see, and the Mini has us hopeful for the near future of the electric car scene.

What investors should notice about this pricing announcement is that we could be entering a new phase of electric car adoption by the masses. It might be time to start paying closer attention to automakers that have made commitments to invest in electrifying their lineups and look at which ones are actually seeing some success doing it. Which automakers will thrive as the car industry gets more electrified remains to be seen, but it's something worth paying attention to for anyone financially invested in the auto industry.