Please ensure Javascript is enabled for purposes of website accessibility
Free Article Join Over 1 Million Premium Members And Get More In-Depth Stock Guidance and Research
By Lee Samaha - Nov 26, 2019 at 8:09AM

There are pros and cons to investing in this auto parts, industrial parts, and office products distributor specifically for its regular -- and regularly increasing -- payout.

Although it's one of the lesser-known Dividend Aristocrats, Genuine Parts Company's ( GPC -0.53% ) remarkable track record of 63 years of consecutive payout increases deserves respect.

So naturally, income investors may want to consider the stock as an option for their retirement portfolios -- but they'll first want to take a closer look at the auto parts, industrial parts, and office products distributor to gauge whether it will be able to continue its great run. 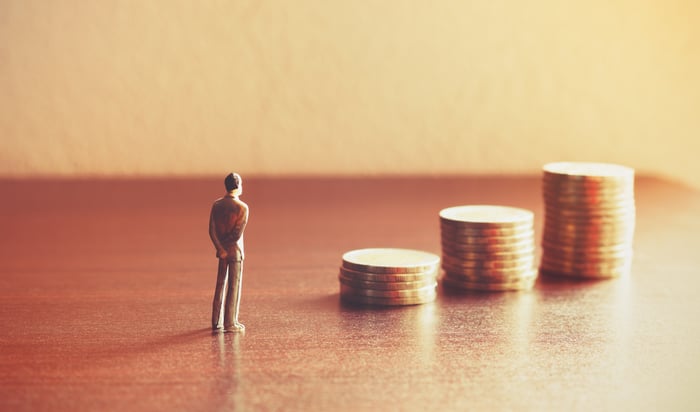 The glass-half-full viewpoint on Genuine Parts highlights its history of dividend increases and its strong ongoing return on equity (RoE). RoE is simply net income divided by shareholders' equity, and measures how much profit is being generated from the money invested in existing assets. Higher numbers are better, and demonstrate a company's ability to grow its earnings. 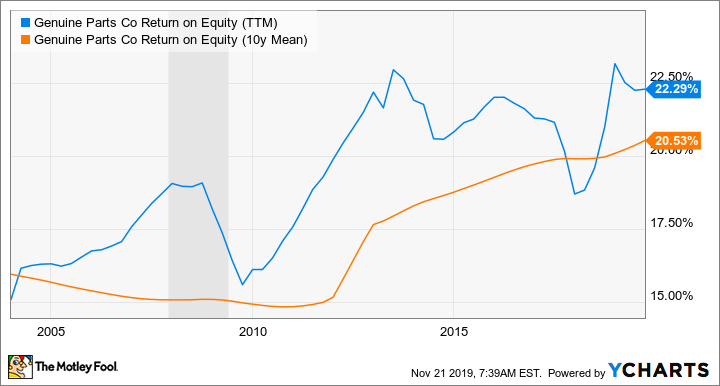 Once we know the RoE, the payout ratio and divided yield we can use the Gordon Growth Model to calculate how much it can grow its dividend on an annual basis.

If Genuine Parts can continue to generate a 20% RoE, then -- given that its dividend currently consumes around 54% of its earnings -- it has the potential to grow its payout by around 9% annually over the long term. And with a yield that's now close to 3%, that's an attractive proposition.

Moreover, the business appears to be well balanced, with 56% of sales going to the automotive parts market -- traditionally a recession-resistant industry -- while the industrial parts business (34% of total sales) has the potential to do well in cyclical upturns. The remaining 10% of its sales come from business products -- an area where it's subject to fierce competition from Amazon.com ( AMZN -1.38% ).

Viewed from a more negative perspective, it's clear that the company's RoE has been boosted in a way that might not prove sustainable.

It's certainly true that Genuine Parts Company is generating good RoE, but it's important to look at how and why. Ultimately, a company's RoE is determined by multiplying the following metrics:

In case you want to check this, it can immediately be seen that multiplying these factors together leaves you with RoE (income/shareholder equity).

The higher the number for each factor, the better -- because that increases the value of the final figure. However, investors need to keep an eye on those financial leverage figures. A company can boost those by taking on debt to buy assets, which juices its RoE to offset the impact of falling profit margins and asset turnover.

Unfortunately, that's exactly what Genuine Parts appears to be doing.

To be clear, there's nothing wrong in a company taking on debt -- especially in a low-interest rate environment -- if it leads to the promised land of rising profit margins and better revenue generation from assets.

However, as you can see below, this company's profit margin has been on a downtrend, whether in favorable or unfavorable end-market conditions. Moreover, asset turnover keeps falling. This means that the company has seen falling margins as it adds assets, and that its new assets haven't been generating as much revenue as the old assets did.

The question, then, is just how sustainable its rising financial leverage is, and whether there are structural problems with Genuine Parts that are causing ongoing deteriorations in performance? 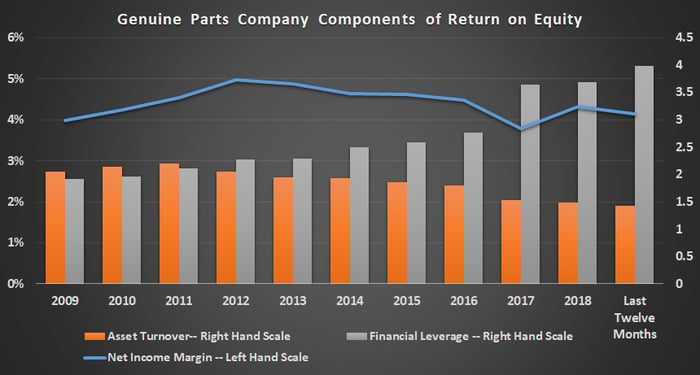 A look at some commonly used metrics confirms the company's debt position has deteriorated, although it's worth noting that its current debt-to-EBITDA ratio is still at a level generally deemed acceptable for investment-grade debt. 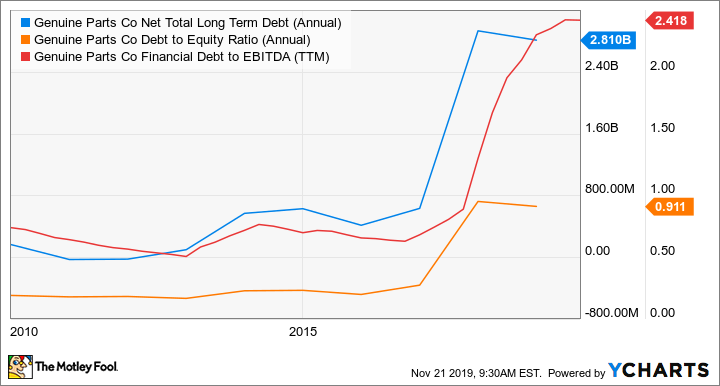 It's no secret that Amazon and other e-commerce companies have muscled in on the office supplies market -- Genuine Parts Company names Amazon as a competitor in its business products segment. It's no surprise to see margins challenged in that segment. However, Amazon's ambitions may present a long-term threat to auto parts retailers' margin prospects.

In addition, there's evidence to suggest that industrial supply companies also face margin challenges from Amazon and other online competitors. To be fair, Genuine Parts has improved its margin in its industrial parts business over the last few years, but its automotive parts segment margin remains challenged, and so does its total company margin. 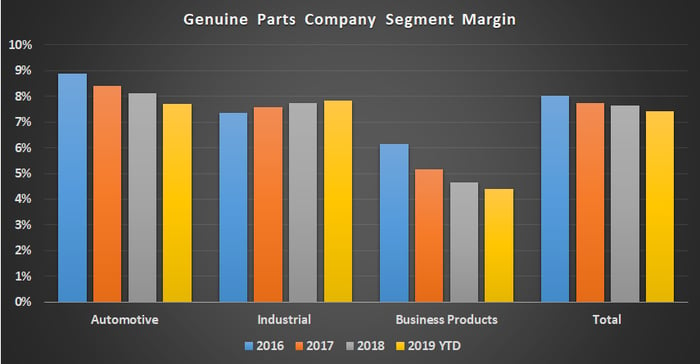 Genuine Parts Company is one to avoid

All told, if you are going to buy a stock for its dividend and then park it into a retirement portfolio, you probably ought to feel confident that the business isn't going to be structurally challenged over the long term. In this case, the current trends don't look great.

Moreover, the decade-long trend in the underlying components of the company's RoE generation needs improvement. Genuine Parts Company will have to start generating some margin expansion and revenue from assets in the future, but until then, it's probably a Dividend Aristocrat worth avoiding.