China wants to build a reusable rocket. This we already know. And Rocket Lab wants to make its small rockets just as reusable as the Falcon 9s launched by SpaceX.

And yes, there's an old saying that "if wishes were horses, beggars would ride," but here's the thing: Both Chinese state-owned rocket launchers and privately owned Rocket Lab are saddling up and trying to make a real go of reusable rockets. 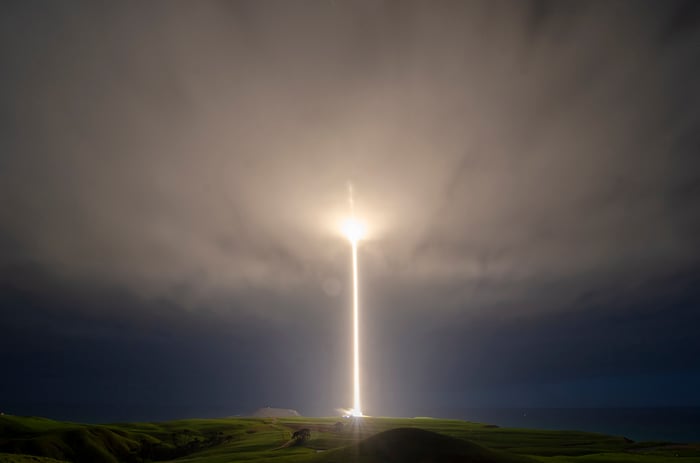 "Rocket Lab Electron rockets sure are pretty -- but can they be made reusable?" Image source: Rocket Lab.

The reasoning is clear: Currently, "incumbent" rocket launchers like Roscosmos in Russia, Arianespace in Europe, and the Boeing-Lockheed Martin joint venture United Launch Alliance (ULA) in America rely entirely on expendable launch technologies. In order to launch a satellite, they must build a rocket. In order to launch a second satellite ... they must build an entirely new rocket from scratch.

And with each new rocket built, the cost of space launch rises.

SpaceX's solution to this dilemma has been to pioneer the use of flight-proven (aka reusable) rockets. Because if you can build just one rocket, and reuse it to launch multiple satellites on multiple missions, you save enormously on the cost of building rockets. Essentially, your cost of doing business begins to approach the cost of filling up the tank with rocket fuel. This is how SpaceX can now afford to launch satellites into orbit for as little as $50 million, while its rival ULA is still charging in excess of $177 million for an Atlas V flight.

It's also why China and Rocket Lab want to get in on the reusable rocket game.

In the case of China, we saw a big leap forward toward reusability earlier this month, when a Chinese Long March 4B rocket first delivered an Earth observation satellite into orbit, then deployed "grid fins" on its spent first stage booster to help maneuver and control the booster's fall back to Earth. (On SpaceX's Falcon, grid fins are used to help slow the Falcon's descent through the atmosphere, and to help it maneuver to its landing spot.)

This was the second time China has employed grid fin technology, and while China's space program hasn't yet combined the use of grid fins with landing legs and retrorockets to permit a controlled first stage landing (so that the rocket can be reused), the experiment with grid fins usage suggests that this is the direction in which China is headed.

Indeed, SpaceNews.com reports that the upcoming "Long March 6" and Long March 8" rockets could see China launching and landing its rockets a la SpaceX by as early as 2035.

Earlier this month, the company began preparing for its tenth "Electron" rocket launch (named, in RL's tongue-in-cheek fashion, the "Running Out of Fingers" mission), which is scheduled to launch later this week. In its press release, Rocket Lab noted that the mission will put into orbit "multiple microsatellites in a rideshare mission representing five different countries."

That's the main mission. But this rocket will also be equipped with "S-band telemetry and onboard flight computer systems, to gather data during the first stage's atmospheric reentry," and "a reaction control system to orient the booster during its reentry descent." So while "Running Out of Fingers" may not be ready to land itself just yet, it's designed to begin gathering data on, and equipped to begin preparations for, a future mission in which the rocket will be recovered for reuse.

Rocket Lab's plan, by the way, differs from how SpaceX recovers and reuses rockets. At RL, spent first stage rockets will parachute back to earth, be snagged by helicopter, and be carried back to land for refurbishment and reuse. Simply getting one extra launch out of a rocket in this manner, says Rocket Lab CEO Peter Beck, would be a "fantastic" way to double the company's rocket production without any additional capital investment.

To be clear, neither China nor Rocket Lab is anywhere near being able to duplicate SpaceX's feat of consistently launching and landing rockets for reuse -- yet. But with each advance made by these rivals, SpaceX's "edge" over its competitors, derived from its ability to reuse rockets rather than having to build new ones from scratch for each new space launch, shrinks just a little bit.

One notable exception to this trend: At ULA -- the space launch joint venture between Boeing and Lockheed Martin -- the plan is still just to make the company's new Vulcan rocket reusable ... eventually.

Vulcan hasn't actually flown yet, you see. And even once it does begin flying, it still won't be the rocket's final form. ULA plans to start out flying a combination Vulcan first stage-cum-Centaur rocket second stage, then later switch out the Centaur for a more powerful "ACES" second stage. At some point in this process -- ULA won't say exactly when -- it wants to try reusing engines from the Vulcan first stage by detaching them after the rocket's burn, parachuting them to Earth, and catching them with a helicopter.

So basically the same thing as Rocket Lab described up above.

The key difference: Rocket Lab has a working rocket that it wants to make reusable to experiment with already -- and is forging ahead with its plan to make that rocket reusable. ULA doesn't, so it can't.