Please ensure Javascript is enabled for purposes of website accessibility
Free Article Join Over 1 Million Premium Members And Get More In-Depth Stock Guidance and Research
By Billy Duberstein - Nov 28, 2019 at 11:34AM

All we know about the controversial vehicle so far.

There aren't many companies as divisive as Tesla ( TSLA -6.42% ), and there aren't many Tesla products as divisive as the newly unveiled cybertruck. The audacious design, which CEO Elon Musk admits was inspired by the sci-fi film Blade Runner and James Bond film The Spy Who Loved Me, looks more like a vehicle made for the invasion of some alien planet, not to haul equipment around suburban America.

While many on social media slammed the bold design and taunted the company over its botched unveiling (see below), many are still enthusiastic about the truck's out-of-the-box look and impressive specs. Here's the good, bad, and the ugly regarding all things cybertruck. 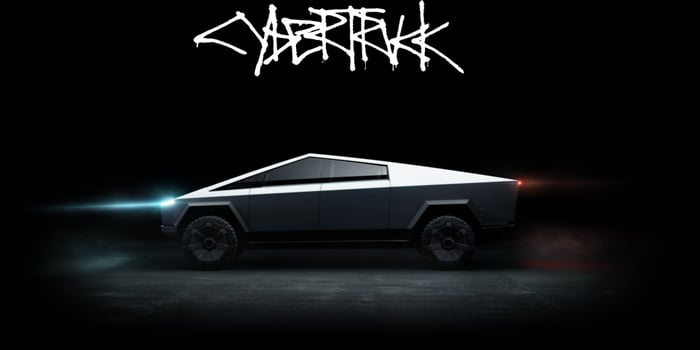 Starting with the ugly

At first, Tesla's shares were down some 6% on the day following the cybertruck reveal, as many major publications ridiculed both the design and unveiling. A Forbes editorial called it "Ugly as Sin." Even CNN noted that The cybertruck had become "the butt of every internet joke."

It didn't help that during the unveiling, Musk's lead designer, Franz von Holzhausen, attempted to demonstrate the toughness of the cybertruck's windows, only to subsequently smash them. Musk later blamed the prior "door test" for the snafu, where von Holzhausen took a sledgehammer to the driver's side door, which the door defended quite well. Musk later tweeted that the door test had actually cracked the driver's side window frame prior to the window test with the steel ball.

Of course, that doesn't explain why the back window then smashed as well.

If one can get past the loud design and unveiling slipup, there were actually some very impressive specs on the new vehicle.

As is the case with Tesla's other models, the company is offering discounted self-driving features for $7,000, with the price set to increase in the future once the feature is legally available via software upgrade.

On a final positive note, despite the naysaying from social media, Musk tweeted that by the end of the weekend following the presentation, Tesla had already received 200,000 preorders. If those numbers do turn into sales, it would be impressive, enough by themselves to garner sixth place in U.S. pickup truck sales, according to JD Power. That would be just ahead of the GMC Sierra at 158,284 units sold and just behind the Toyota Tacoma at 245,659 units sold in the U.S. in 2018.

The bad, or at least issues to work through

While the cybertruck has much going for it, investors need may to "kick the tires" a bit more beyond the initial presentation, so to speak, as there could be a few holes in management's story.

First, Tesla's promotional tug-o-war video displaying the cybertruck's superiority over the Ford F-150 may have been flawed, as it appears the cybertruck is not only heavier, but was facing off against a mid-range F-150 model with older tires and only rear-wheel drive activated, as opposed to all-wheel drive.

Sundeep Madra, VP of Ford X, Ford's next-gen technology incubator, subsequently challenged Musk to send a cybertruck over so that Ford can conduct an "apples-to-apples" test -- which Musk promptly accepted. The new test may still work out in Tesla's favor, but investors and customers shouldn't necessarily bank on the cybertruck's superiority until more tests are done, hopefully one day by an independent judge.

The 200,000 preorders may also be a bit misleading as any type of leading indicator. Preorders for the cybertruck are only $100 and fully refundable, so it isn't as if these sales are totally bankable. By comparison, the preorder for the Model 3 was $1,000, and for the upcoming Model Y, it's $2,500. So, it's not like putting a preorder down is a huge commitment for the cybertruck.

Therefore, some of the hard numbers -- such as specs and preorders -- are still questionable at this point. Pickup drivers also tend to be more suburban and rural, and it's still unclear whether they will shed their loyalty for traditional models for the space-age design of the cybertruck.

Whether the cybertruck turns into a significant revenue driver for Tesla is still an open question, but one thing's for sure: It's sparking conversation, and there will be plenty of commentary from bulls and bears alike for this disruptive automaker over the next few years.