The stock market on the first trading day of the last month of 2019 wasn't a hotbed of excitement. Despite indications that the preceding Black Friday was a strong one, with notably higher overall sales on a year-over-year basis, most major indexes traded more or less flat on the day.

But it was a day to remember -- and not in a good way -- for investors in certain stocks that took big hits to their share prices. Here are two stocks that suffered relatively hard smacks, and why. 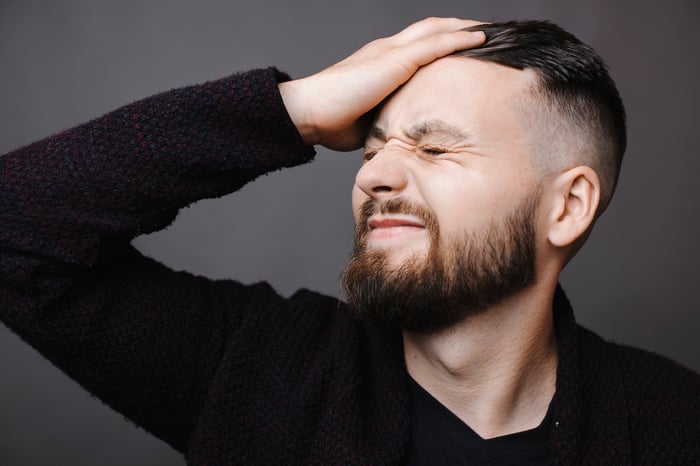 We of a certain age can remember former Federal Reserve Chairman Alan Greenspan's famous caution about "irrational exuberance" in the stock market. Well, it turns out that the same emotion particularly applies these days to shares of streaming services.

At least, that's the view of investment bank Morgan Stanley, which on Monday downgraded its recommendation on Roku (NASDAQ:ROKU) stock from overweight to underweight (read: buy to sell), although oddly it did raise its target price slightly. Anyway, Roku's stock price promptly took a 15% dive on the day.

Much of analyst Benjamin Swinburne's rationale has to do with what he calls "overall exuberance over all things streaming." That, combined with his belief that revenue and gross profit growth will slow for the company next year, led to the recommendation downshift and the price target cut.

This argument certainly has merit, at least in the case of Roku's share price -- even with Monday's price swoon the stock is up 346% so far this year. Valuations are quite high, with a price-to-sales ratio, for example, at a vertigo-inducing 16. With numbers like that, investors get nervous.

I don't necessarily think they should. Yes, that's expensive, and a nearly 350% rise should give anyone pause to think.

Yet Roku is one of the hardware makers best-positioned to capitalize on the Age of Streaming, which is still in its infancy. As a matter of fact, I'd even say it's in the best position, given its strong position on the market and its resiliency in the face of competition from such powerhouse companies as Amazon and Alphabet's Google.

There is certainly a lot of exuberance about the very high-potential business of streaming entertainment. I'm not convinced it's irrational in Roku's case. I don't necessarily think growth will slow (at least not to any meaningful extent), and the company is holding onto an excellent position in its market. I'd still be a buyer of the stock.

Another double-digit decliner on Monday was oil stock Apache (NASDAQ:APA). In fact, the 12% fall suffered by the shares dropped them to their lowest level in nearly two decades.

The company gave an update on its progress with Maka Central Number One in Suriname, part of a major overseas exploration project. The news wasn't encouraging for investors; Apache has apparently drilled down to 6,200 meters and conducted a set of tests. Following that, it will continue drilling until it hits 6,900 meters.

What investors want to hear in such updates is that a company has struck oil, rather than it's done some tests and will keep trying. Perhaps the market wouldn't have taken it so badly if the project hadn't been so hyped, or if peer ExxonMobil hadn't scored recently with its exploration activities off the coast of nearby Guyana.

Apache has devoted much capital and resources to its Suriname efforts, and Monday's news indicates these aren't paying off -- at least not yet. Although this certainly isn't game over for this particular project, it brings up justifiable concerns over it. And it also provides a very sensible reason to avoid Apache stock for now.