"Edison's general electric" is how some newspapers referred to the then-fledgling company General Electric (NYSE:GE) in the late 1800s, when the stock first began trading publicly. The famed industrial conglomerate grew quickly, becoming one of the first members of the Dow Jones Industrial Average in 1896.

Since the 19th century, the company has grown, changed, and -- lately -- struggled. So far in the 21st century, GE's shares have lost more than 75% of their value, the company has shed many of its businesses, and investors are openly questioning the stock. 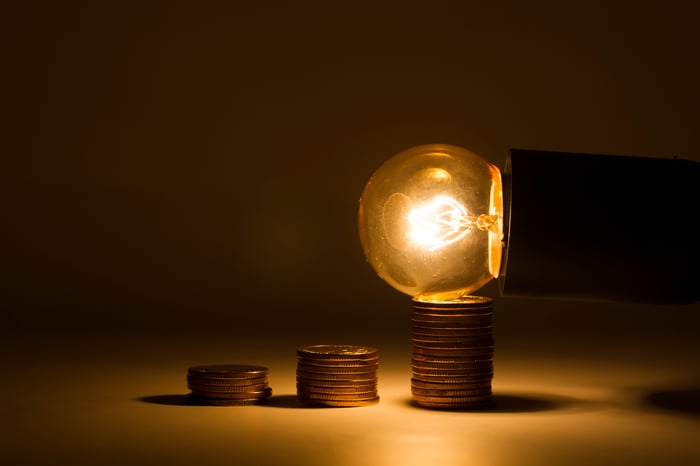 General Electric has been a top stock for much of its history. But lately, outperformance has been elusive. Image source: Getty Images.

Unfortunately, it's tough to pinpoint how much said investment would be worth. Record keeping was pretty spotty back then, and most newspapers hadn't begun to regularly publish stock listings.

While GE was first incorporated in 1889, the first reference to a price I could find was from a July 31, 1890, issue of the Milwaukee Journal, referencing "an exceptional decline in Edison's general electric stock of 7 per cent to 105." That's $105 per share. But by November 1890, as the "Baring Crisis" had set in, GE's shares had tumbled, according to the Atchison (Kansas) Champion "to 65."

With such wild fluctuations in share price, it's impossible to say with certainty what the debut price was (GE did not respond to requests for information). However, it seems likely that as an early investor, you would have expected to pay somewhere between $50 and $100 per share, which would have gotten you between 10 and 20 shares for your $1,000. Let's split the difference and say you bought 15 shares.

Today's GE shares are worth about $11.60 per share, which would make GE stock an absolutely abysmal investment, even before inflation is factored in. But we have to take two big things into consideration: dividends and stock splits.

GE has been paying a dividend since at least 1893, according to an article in the Milwaukee Sentinel: "New York, March 31. -- The directors of the General Electric company to-day declared the regular quarterly dividend of 2 per cent., payable May 1."

However, it's tough to compute exactly how much shareholders might have gained from these dividends during the stock's early years, because as it became more and more successful, GE began doling out not only annual dividends on a percentage basis for its regular shares, but also issuing special cash dividends, and even issuing dividends in the form of special shares to its shareholders, which themselves paid dividends. For a while, some of those special shares were even listed on the NYSE, with prices moving independently from the common stock's shares. At one point in 1912, the company even declared a special dividend of 30%!

A New York Times article from June 22, 1924, describes this situation:

At a quoted price of $236 [per share], General Electric common [stock] on June 17 attained the highest price in twenty-two years. Paying $8 cash and 5 per cent. in special $10 par value stock annually, which in turn pays 60 cents a share, this stock sells to yield 5.74 per cent at the current market quotations, which is similar to the yield of a bond. The successive rises in the General Electric common have caused it to be regarded in speculative circles as something of a "mystery stock."

Additionally, the company seems to have introduced stock splits sometime in the early 20th century. New York Times articles confirm 4-to-1 splits in 1926 and 1930 and a 3-for-1 split in 1954. Assuming these to be the only splits from that era -- which may be an incorrect assumption -- we can roughly calculate what our 15-share investment would have been worth by 1962, when records become a lot clearer.

I've divided the table below into periods between the stock splits that we know of. I've used price and dividend information from back issues of The New York Times to estimate an average per-share price from the time period and an average annual dividend yield from the period. I've then used those estimates to compute how much this would add to our total if reinvested. Then, I've converted that investment into a total number of shares, which I split for the start of the next period.

Again, this is a best-guess estimate, and it could be way off, depending if there are other unreported stock splits in this history, or other unaccounted-for extraordinary dividend payments.

Then it gets easier

Luckily, GE has made public its historical information about stock splits and dividends from 1962 onwards, or about half of the company's history. While shares themselves have increased in value (factoring in splits) by 1,380% during that time, reinvesting the dividends would have netted you instead a 3,990% return.

That sounds impressive, but the S&P 500 has had a return (not including dividends) of 4,290% during that time, so GE has actually seriously lagged the market. If, however, you'd been savvy enough to sell at GE's all-time split-adjusted high in late 2000, you'd have seen more than a 10,000% return on your 1962 investment.

Applying our rough 1961 estimate to this subsequent performance, it looks as though a $1,000 investment at or near GE's IPO would today be worth roughly $10.7 million. That's certainly not chump change, and it's strong evidence that a "buy and hold" philosophy can generate significant wealth.

While I certainly hope we'll be around to celebrate our 130th birthdays, most of us aren't going to hold onto a single investment for that long, even an investment in a blue chip like GE. The fact that GE's total return performance has lagged the S&P 500's ordinary returns shows the value of diversifying and reevaluating your portfolio on a regular basis.

But despite its current woes, General Electric has clearly been a solid investment over most of its existence.