Shares of streaming star Roku (NASDAQ:ROKU) surged nearly 400% from January 1 through Thanksgiving Eve -- but that's all there is to the trade, and now it's time to exit the stock.

Or so says Morgan Stanley. In a downgrade this morning, the Wall Street analyst took an ax to its rating on Roku stock (but not its price target), cutting the shares from "equal weight" to "underweight" (but raising its price target from $100 a share to $110). 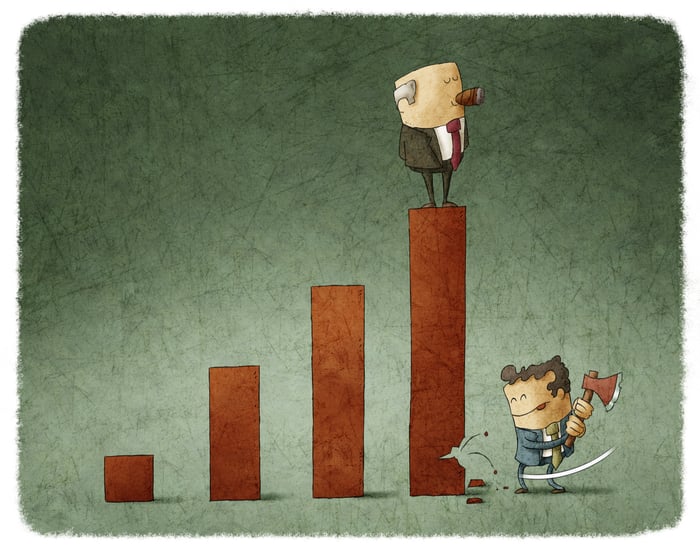 Investors are panicking -- or at least taking the downgrade as a cue to collect profits -- and Roku stock is down 14.5% as of 10 a.m. EST. But should it be?

After all, Morgan Stanley was wrong on its last price target. The analyst said the stock would only go to $100, but Roku topped $164 last week. And it's not like Morgan Stanley told us anything we didn't already know:

And Morgan Stanley told us some other things we knew as well:

Really, then, the only thing that has changed for Roku this morning is that one of its investors thinks a 400% profit on Roku stock is good enough, and there's no sense getting greedy. I can't really argue with that.

With Roku's business still unprofitable and the stock trading for more than 16 times trailing sales, Roku shares are really expensive. On the other hand, though, analysts polled by S&P Global Market Intelligence think Roku's sales could roughly triple over the next four years. And GAAP profits -- which could emerge as early as 2021 -- could increase in size by more than 10 times over the succeeding two years, growing from $0.21 per share (in 2021) to $2.31 per share (in 2023).

Morgan Stanley's exit notwithstanding, such tremendous growth might be worth waiting around for.