As the leader in ad-supported streaming technology, Roku (NASDAQ:ROKU) has produced stunning growth this year, with its stock price surging 423% through Black Friday. By bypassing the original content war that has pitted the major streaming players against each other, Roku has carved out a profitable niche for itself by being agnostic and bringing thousands of streaming apps to its platform -- and to consumers.

The growth stock hit the skids on Monday, however, as an analyst turned bearish on it, sending shares down more than 16%. The analyst's argument is one we've heard before, and it's rather short-sighted. Let's look at what was said and why long-term investors will benefit by ignoring a short-term mindset. 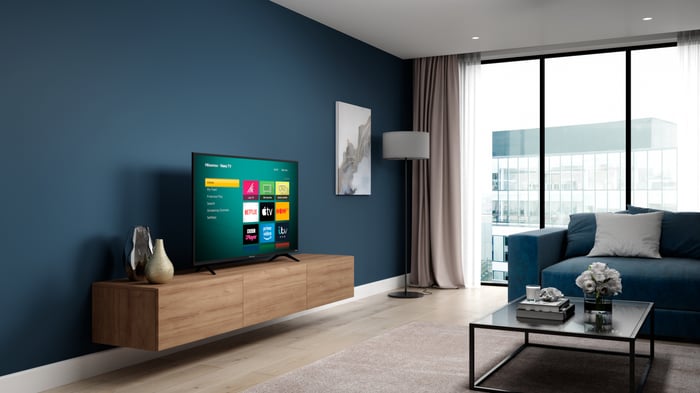 It's all priced in?

Morgan Stanley analyst Benjamin Swinburne downgraded Roku stock to underweight (sell) from equal weight (hold), citing the stock's valuation in a note to clients on Monday, which he titled "It's All Priced In." Swinburne takes issue with Roku's lofty valuation and the "overall exuberance over all things streaming."

The analyst is worried that Roku's digital advertising business -- which has been the principle growth driver in 2019 -- will experience decelerating growth more quickly than investors anticipate. "This has been the case with other emerging digital advertising businesses like Snap (NYSE:SNAP) and Twitter (NYSE:TWTR), where rather than [growth fading] modesty, growth slowed dramatically," he wrote.

Swinburne also has concerns related to Roku's active account growth, which increased 36% year over year in the third quarter, edging down from the 40% and 39% growth it notched in the first and second quarters, respectively. He believes that previous quarters got a boost from the addition of Roku's smart TV operating system (OS) into TCL TVs, and without a sizable new partnership, active account growth will continue to moderate.

The problem with these arguments is that they focus on what could happen over the next several quarters and ignore the megatrend of streaming and how it will play out years from now.

There's no arguing that Roku stock currently sports a nosebleed valuation, with a forward price-to-sales ratio of 17, when many investors consider a ratio of between 1 and 2 to be reasonable. That said, several of the analyst's other points ignore the obvious.

Swinburne theorized that Roku's active account growth -- which slowed in the most recent quarter -- will continue the trend of slowing growth that began in the third quarter, having lapped the TCL partnership. However, Roku has just recently begun its European expansion -- as evidenced by its recent agreement with television maker Hisense -- which saw the release of the first Roku-branded TV in the United Kingdom. That's but the first stop on what's sure to be a multicountry tour, which will no doubt act as another catalyst for active account growth.

Additionally, Swinburne's comparison to players like Snapchat and Twitter isn't an apples-to-apples comparison. Roku isn't entirely dependent on the network effect like a social media platform but rather on the company's ability to attract and engage users by offering an agnostic one-stop shop for all things streaming. Roku provides access to thousands of popular and niche streaming video and music channels, all via a Roku-branded device or smart television. This allows the company to participate in the digital ads that consumers view while using any of Roku's platforms. It's worth noting that advertising is Roku's fastest-growing and most profitable business.

Don't just take my word for it. Roku's streaming hours grew to 10.3 billion in the third quarter, up 68% year over year. At the same time, its platform segment -- which includes digital advertising, the Roku Channel, and its smart TV OS -- grew 79% year over year. This is a sign that engagement is soaring and not likely to suffer the same fate as the social media counterparts Swinburne uses as comparisons.

Not this quarter or this year

The transition from traditional broadcast and cable TV to streaming has only just begun and will take years to play out, not just a few quarters. For investors in it for the long haul, there's plenty to like about Roku. Strong active account growth, soaring engagement, and international expansion that's still in the early stages all provide evidence that, while the stock chart might see plenty of ups and downs in the near term, Roku still has a bright future.