PayPal Holdings (NASDAQ:PYPL) and Square (NYSE:SQ) are poised to profit from the secular growth of digital payments over the next several years. Both companies grew their payment volume by 25% during their latest quarter and the market values these growth stocks at comparable enterprise value-to-sales ratios. But beyond these similarities, significant differences exist and these competitors actually align with different investment strategies.

PayPal is growing its ecosystem

Since its spinoff from eBay in 2015, PayPal has grown into a global digital payment platform for consumers and merchants, partly thanks to acquisitions. For instance, it acquired the mobile payment company iZettle in 2018 to expand its in-store presence. It also diversified into peer-to-peer payments with its acquisitions of Braintree -- the owner of Venmo -- in 2013 and Xoom in 2015. More recently, PayPal announced it agreed to acquire Honey Science to enhance the online shopping experience of its customers. 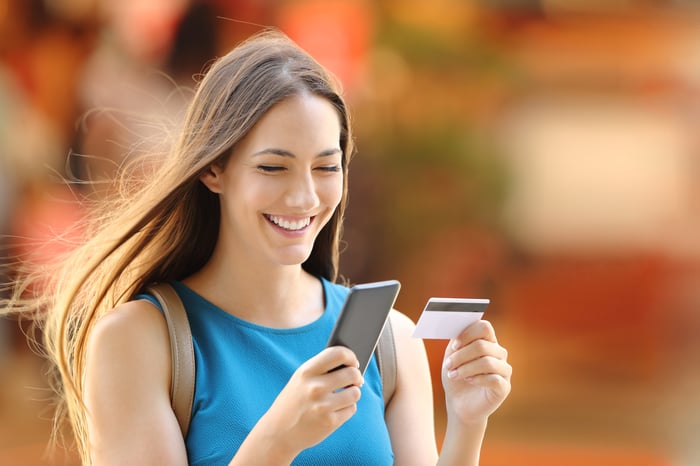 As a result of its expanding ecosystem, PayPal's revenue has been increasing, from $6.7 billion in 2013 to $17 billion over the last 12 months, and analysts expect revenue to grow by 16.9% next year.

PayPal's total payment volume (TPV), which represents the value of payments completed on its platform, reached $179 billion last quarter, up 25% year over year. And the company's dependence on eBay is shrinking: Its payment volume from the marketplace decreased to 8% of its TPV.

Also, thanks to its large scale, PayPal has been generating profits over the last several years, with a comfortable operating income margin between 14.4% and 16.3% as reported under generally accepted accounting principles (GAAP).

Square is at a smaller scale

Square was created in 2009 to provide in-store payment solutions for merchants. And Square has been growing its ecosystem, too. For instance, the company developed its peer-to-peer payment solution, its Cash App, with innovative features that allow customers to trade bitcoin and buy fractional shares of stock.

Thus, Square and PayPal now compete in many payment areas, but Square is still a smaller player than PayPal. Last quarter, Square's gross payment volume (GPV), which you can compare to PayPal's $179 billion TPV, reached $28.2 billion, up 25% year over year. But thanks to its smaller scale, Square's revenue growth was stronger. And despite the company's revenue growth deceleration because of its increasing revenue base, management still expects high 30%-plus revenue growth next year due to its expanding ecosystem.

Square's smaller scale implies lower profitability than PayPal, though. But its margins are improving along with its increasing size. After years of losses, the company reported a slightly positive GAAP operating income last quarter.

Despite their important differences in terms of scale, growth, and profitability, the market values PayPal and Square at similar enterprise value-to-sales ratios of 7.15 and 6.83, respectively. And because of Square's lower profitability and higher growth compared to PayPal, Square's forward P/E ratio of 70.1 exceeds PayPal's P/E ratio of 30.5.

Given these high-valuation ratios, both payment companies don't look cheap, even in the context of their strong double-digit revenue growth. But PayPal is a better buy than Square for prudent investors because of its higher margins and lower P/E ratio. In contrast, Square is a better buy for aggressive investors with a higher tolerance for risk and the rewards it brings given the company's smaller scale and accelerated revenue growth.