According to the executive summary of the 2019 Report to Congress of the U.S.-China Economic and Security Review Commission, released just last month, China aims:

to establish a leading position in the economic and military use of outer space ... In pursuit of this goal, China has dedicated high-level attention and ample funding to catch up to and eventually surpass other spacefaring countries in terms of space-related industry, technology, diplomacy, and military power. If plans hold to launch its first long-term space station module in 2020, it will have matched the United States' nearly 40-year progression from first human spaceflight to first space station module in less than 20 years.

Far from lauding China's progress, however, the report was meant to raise an alarm. As the commission warns, Beijing "plans not merely to explore space, but to industrially dominate the space within the moon's orbit of Earth." China "uses its space program to advance its terrestrial geopolitical objectives" and is deploying "aggressive state-backed financing" to establish "a commanding position in the commercial launch and satellite sectors." Long-term, China has a "military-civil fusion strategy" to turn space into "a critical U.S. military and economic vulnerability." 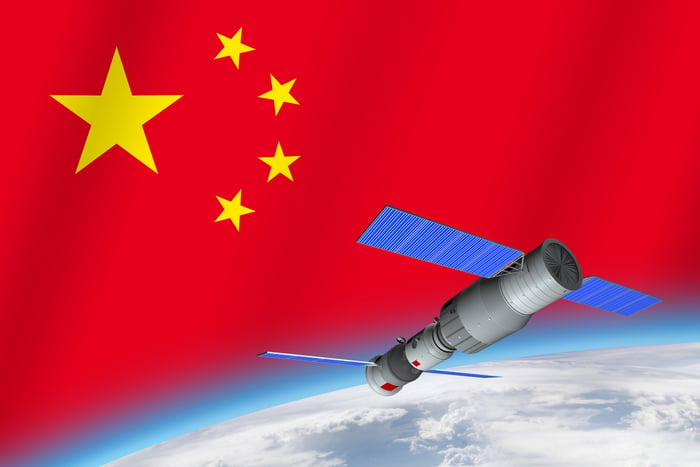 In fact, it might not be too strong a statement to say the U.S. government now views this situation as a crisis -- but as the old trope goes, in China the word "crisis" comprises two other words: "danger" and "opportunity."

And it may offer a particular opportunity to space investors.

You see, after laying out the case for why China's space ambitions pose a threat to the United States, the commission proceeds to urge that Congress respond to the threat. Specifically, that Congress "develop a strategy to ensure the United States remains the preeminent space power" -- not just militarily, but economically as well. In particular, the commission urges that the U.S. government establish a long-term strategy in three areas:

So why is it important for investors to know this? While it's not yet certain that Congress will develop the recommended strategies -- or pass laws to implement those strategies, or fund efforts to implement those laws -- the fact that a Congress-sponsored organization is talking about sponsoring efforts to mine asteroids and other planets, about building things in space, and about developing a solar power infrastructure in space, is pretty astounding. Politico reports that this is literally "the first time [such a] true grand strategy for space" and its economic development has been proposed. And this could become the first step that leads to action.

The reason they're talking about this is also encouraging.

In his 2018 book Accessory to War, astrophysicist and educator Neil deGrasse Tyson reviewed the history of how nation-states have used science to further their objectives in the past. When it comes to space, he found that great power rivalries such as that between the United States and the Soviet Union have been the primary driver of U.S. investment. We went to the moon in the 1960s, for example, not to search for mining concessions, to seek out little green men, or even just to plant a flag, but because the Soviets were going there and we wanted to get there first.

The fact is, according to Tyson, President Kennedy was on record saying: "I'm not that interested in space." But Kennedy was willing to undertake "fantastic expenditures which wreck our budget" -- his very words -- if necessary to match what the Russians were spending. His goal: To be able to say "we beat them ... by God, we passed them" and landed on the moon first.

And I think the analogies to today are pretty compelling. Like the Soviets back then, China today is devoting "ample funding" to "dominate" space. If it comes down to spending money necessary to prevent that from happening, or not spending the money and allowing China to forge ahead and build space stations, mine the moon, and develop other cutting-edge space technology while we sit on our wallets, Congress is probably going to find the money -- whether or not legislators are "interested in space" per se.

If history repeats itself, we could be seeing the birth of a new growth industry. Now is the time to start paying attention, and seeking out the stocks that will profit from it.