It's been more than a decade since the housing crisis resulted in the Great Recession and market meltdown of 2008 and 2009. Yet since that took place, the housing market has made a stunning recovery. Moreover, that recovery for housing has lasted a lot longer than many had thought -- and the big reason has to do with interest rates.

Back in the immediate aftermath of the housing boom, mortgage rates were relatively high, fluctuating between 6% and 7% for 30-year mortgages during 2006 and 2007. Yet as economic conditions deteriorated, the Federal Reserve responded by slashing interest rates. Although the Fed largely influences short-term rates, it took extraordinary measures to rein in the longer-term rates that play a key role in determining what you'll pay in mortgage interest. By 2012, 30-year mortgages were below 4%.

Few market participants expected those low rates to last long, because in the past, those conditions in the interest rate market have resulted in massive economic expansion that in turn has created inflationary pressures that typically lead the Fed to push interest rates higher. Indeed, that's what investors anticipated in late 2018, as the central bank made several interest rate increases in a row. 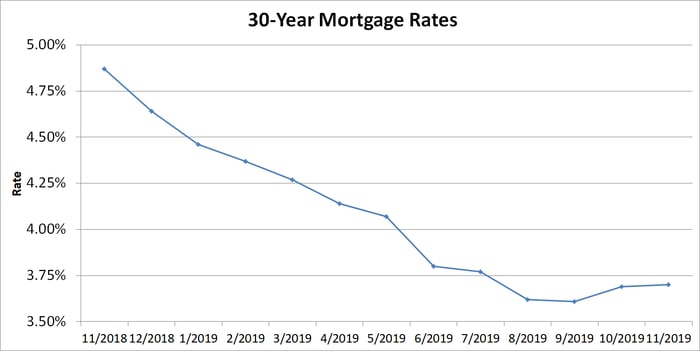 However, the Fed quickly did an about-face with its interest rate policy, responding to other economic pressures by once again cutting rates. That's led the mortgage rate downward again over the past year, recently hitting its lowest levels since mid-2016.

Low mortgage rates make housing more affordable by reducing monthly payments, and that in turn supports home prices, especially in high-priced markets. Ironically, if the U.S. economy were to start booming again, it might prove to be the worst news possible for housing -- because anything that forces interest rates upward could make housing less affordable and cause the long positive trend in prices to lose steam. Conversely, a new recession might keep housing healthy well into the future.