Glu Mobile (NASDAQ:GLUU) develops mobile games for smartphones and tablets. The company has released dozens of titles over recent years, but its revenue is highly concentrated in three titles: Covet Fashion, Design Home, and Tap Sports Baseball. Together, these contribute to roughly 75% of the total revenue.

Shares of Glu Mobile rose as high as $11.50 in April 2019, but steep drops following earnings announcements in May and August forced the price below $4.20. Some of the losses have since been clawed back, but the tech stock is still down 28% year-to-date at $5.85.

Glu has not been a profitable enterprise

The year 2014 was the only year that Glu delivered positive net earnings for a full year in the past decade. Losses are acceptable in many circumstances for a company in growth mode because investments must be made in product development, corporate infrastructure, and marketing to achieve its desired scale. Glu's sales and marketing expenses were a heavy 36.5% of the top line over the first nine months of 2019, so it is fair to say that the company is still prioritizing growth over profitability. 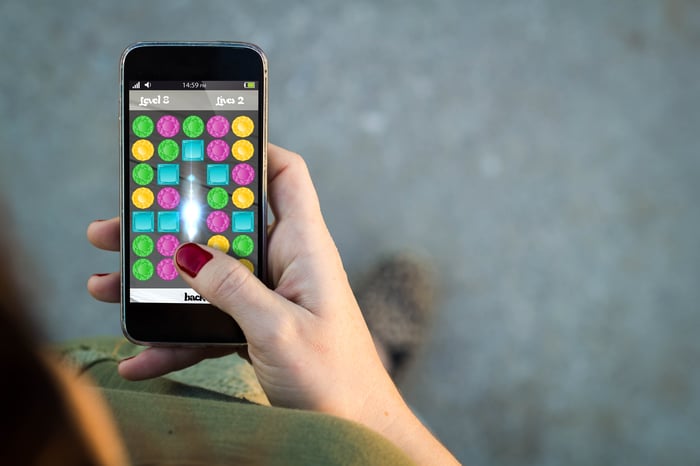 The market often accepts this sort of strategy, but stock prices might experience volatility and are especially susceptible to downside if growth prospects sour. Glu struggled with that exact scenario earlier this year. The company reported strong results relative to its guidance in the second quarter, but it drastically reduced forecasts for the remainder of the year. Guidance for full-year bookings fell from $450 million to $405 million. This drawback was on the tail of weaker-than-anticipated sales in the first quarter, sending investors into an agitated state. Glu relies on a small number of titles to drive revenue, and any hint of trouble in those titles can jeopardize fundamental performance.

A new crop of games could revitalize the company

Glu's management and investors share optimism over new titles being rolled out. WWE Universe, Disney Sorcerer's Arena, Diner DASH, and Deer Hunter Next are among the next crop of titles that are meant to join Glu's big three games as profit drivers. Gaming companies commonly experience volatility and unpredictability around the launches of new titles. Blockbusters can provide several years of fundamental momentum, whereas busts can turn into money pits and unjustifiable valuations.

Analysts are forecasting positive net earnings for Glu in 2020 after the company approached breakeven this year and spoke optimistically about revenue opportunities from its expanding and new titles.

Due to this year's share price declines, the forward-looking valuation has become quite attractive for the gaming stock. Glu trades at a 25.0 forward price-to-earnings multiple, leading to a reasonable 1.67 PEG ratio. For reference, lower-growth industry leaders Activision Blizzard and Electronic Arts have forward P/E ratios of 22 and 21, respectively. Glu's price-to-free-cash-flow ratio is relatively high at 35.5, but this is still somewhat reasonable, especially for a high growth company on the cusp of achieving profitability.

None of Glu's valuation metrics jump off the page as particularly inexpensive. However, the stock is priced reasonably enough to provide plenty of upside potential. A series of strong quarterly results would almost certainly command higher valuation multiples, driving shares higher from fundamental improvement. The path to price appreciation is clear, but successful navigation of that path is far from guaranteed. Underwhelming sales performance from new titles or continued net losses could severely threaten investor confidence, and the market has already clearly demonstrated willingness to flee from this story.

Glu Mobile could be a very interesting opportunity for investors who are bullish about the market viability of the new games, but the stock is likely to get beaten down again in 2020 if this handful of titles fails to meet expectations.