Amazon (NASDAQ:AMZN) just set a new record in terms of Cyber Monday e-commerce sales, but you couldn't tell that from its stock.

Since Cyber Monday, which the company said was once again the single biggest shopping day in Amazon's history, shares have declined nearly 2%.

A 2% decline may not be a huge dip, but in years past, Amazon's stock would get a lift on strong Cyber Monday sales. It doesn't help that Amazon is underperforming the S&P 500, which is up 25.1% year to date. In comparison, Amazon's stock is up just 16.5% so far this year.

The reason for the malaise has more to do with outside forces than its e-commerce business. Investors are more focused on tariffs, trade wars, and cloud computing competition than on how many Echo devices it sells. 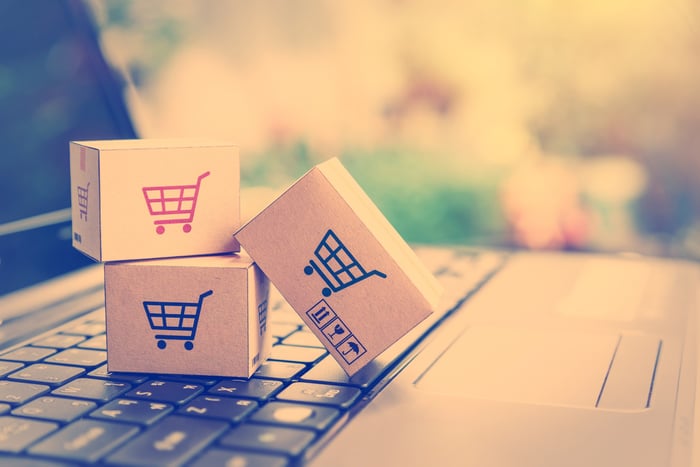 Take the never-ending U.S.-China trade war for starters. Last week, President Donald Trump warned it could last longer than expected, potentially stretching beyond the 2020 presidential election. If the U.S. and China don't reach an agreement, additional Chinese products worth $160 billion will be subjected to tariffs on Dec. 15.

But it's not only with China that trade tensions are rising. The White House warned a French tax that will affect U.S.-based tech companies could result in retaliatory tariffs, including as much as 100% on wines coming out of France. Those comments were enough to send the stock market lower, taking Amazon along with it.

If more products are hit with tariffs, it could force Amazon to raise prices in the U.S. as it passes along the increase in the costs of goods to its customers. Chinese imports are responsible for about 20% of the cost of goods of Amazon's own products, according to Bank of America Merrill Lynch.

Its third-party vendors, which account for more than half of Amazon's e-commerce sales, also have exposure to China, which could weigh on Amazon. If the trade war affects economic growth here or internationally, it could mean fewer online sales for the retail giant, which has some investors spooked.

Competition heats up in the cloud

Outside of the U.S.-China trade war, investors are concerned about the competition in its cloud computing business, Amazon Web Services, as Microsoft (NASDAQ:MSFT) makes further inroads into the market. It just lost a huge 10-year, $10 billion Pentagon contract to Microsoft, which has prompted Amazon to challenge the decision in court. Complaining it was passed up because of political bias, Amazon filed a lawsuit against the federal government. Amazon's Jeff Bezos owns The Washington Post, which has been critical of the White House, raising the ire of President Trump.

However, the loss of the Pentagon contract -- while big, since it could have led to more government work for AWS -- isn't the only problem AWS faces. Antitrust enforcers in the U.S. looking into Amazon's e-commerce practices have reportedly expanded the inquiry to include AWS. The Federal Trade Commission has begun polling software companies about AWS's practices, signaling that the investigation is expanding. The outcome of that may have a big impact on Amazon and makes the shares riskier.

For its third quarter, AWS revenue was $9 billion, slightly lower than the $9.1 billion Wall Street was looking for. While revenue growth was up 35%, it marks the second quarter in a row AWS wasn't able to post 40% or more growth. Revenue was up 37% in the second quarter. The 35% growth rate is the slowest for AWS since 2015 (when Amazon began breaking out cloud sales).

By most estimates, the overall holiday shopping season is expected to be a strong one. But with the trade war extending into the New Year, regulators circling, and Microsoft chipping away at its cloud dominance, investors shouldn't expect the same level of lift in Amazon's stock this holiday season as in years past.