Five Below (NASDAQ:FIVE) delivered another quarter of 20%-plus growth on the top line when it reported earnings in early December. The company reported broad growth across its eight "worlds" led by style, tech, candy, and room items. Growth has mostly been driven by new store openings, but comparable sales also accelerated quarter over quarter, which should provide some momentum for the holiday season.

There were a few things discussed on the conference call that highlight why Five Below is such a great growth story, so let's dig in. 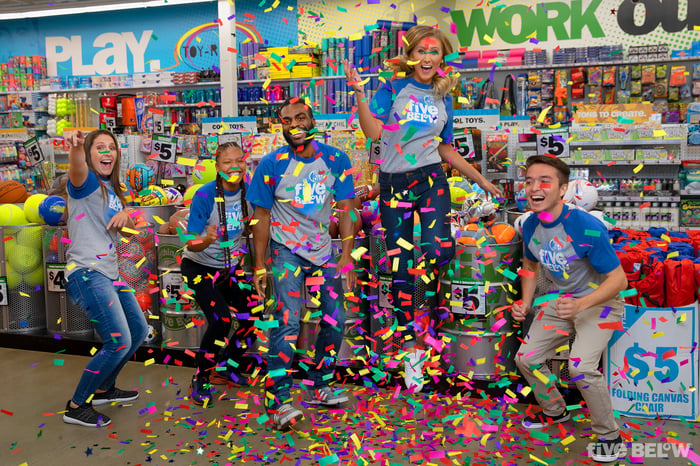 Entering the year, management had a plan to reach about 900 stores by the end of 2019, which involved opening about 150 new stores. The good news is that Five Below has already completed its new store openings for the year, which should give the company plenty of opportunity to drive sales momentum through the fiscal fourth quarter.

There are a few other initiatives that should boost sales, too. The company's increasing scale is allowing management to develop a strong relationship with Walt Disney to source unique merchandise, which should pay off with the recent release of Frozen 2. Sales of Frozen merchandise are tracking as planned, as management reported on the earnings call.

The greater scale is also paying off with the new Ten Below category, where Five Below is offering an expanding assortment of tech gear, including iPhone and iPad accessories, Bluetooth devices, and gaming accessories, for less than $10. The rollout of this new category has been so successful that it has expanded to 25 stores. The customer response has been positive, and it's greatly improving Five Below's brand perception as a place where customers can find higher-value items like wireless Bluetooth earbuds at extremely low prices.

Gaming is a new opportunity

Another growth opportunity emerging is gaming. During the third quarter, Five Below led a round of financing that raised $12 million to invest in Nerd Street Gaming, a company that specializes in building facilities to host esports tournaments. These facilities also serve as a training ground for gamers to develop their skills on professional-grade computer gear that may not usually be accessible to them.

As part of the recent financing deal, Nerd Street Gaming will build 3,000 square-foot spaces inside a select number of Five Below stores starting in 2020. If successful, Five Below plans to eventually roll these gaming spaces out to 70 or more stores over the next several years. The in-store gaming events would obviously help drive higher sales for Ten Below items such as gaming headphones in addition to other items like snacks.

Five Below believes the partnership with Nerd Street Gaming could create additional sales going forward given the rising popularity of competitive gaming. The esports market is currently valued around $1 billion and is growing at a rate of 9% per year, according to market researcher Newzoo.

Balanced growth in sales and earnings

It's encouraging to see more opportunities open up as Five Below expands around the country. The relationships with Disney and new start-ups like Nerd Street Gaming reflect the growing brand awareness for the discount store chain.

Guidance points to more of the growth investors have come to expect. Net sales and earnings should increase by 20% and 26% year over year, respectively, for the fourth quarter. Management's early outlook for 2020 is that sales and profits will continue to increase at a rate of about 20%.

The bottom line: Five Below remains a promising growth story, driven by a long-term opportunity to roughly triple the current store footprint while maintaining positive comps and profitability.