Please ensure Javascript is enabled for purposes of website accessibility
Log In Help Join The Motley Fool
Free Article Join Over 1 Million Premium Members And Get More In-Depth Stock Guidance and Research
By George Budwell - Dec 12, 2019 at 10:38AM

The biotech titan is poised for another strong year in 2020.

Biotech posted exceptional gains in 2019. Despite a rocky year on the political front, biotech stocks were able to surge higher this year on the back of several unexpectedly strong top-line data readouts in key therapeutic areas, a number of high-dollar buyouts, and an increasingly favorable commercial climate in the massive Chinese pharma market.

Next year, though, could be a drastically different story. The U.S. presidential election and slowing global economy are both likely to weigh on the industry in a big way in 2020. Biotech blue blood Amgen (AMGN 1.11%), however, has the pieces in place to overcome these industrywide headwinds to deliver top-notch returns for investors next year. Here's what investors need to know about this top biotech stock right now. 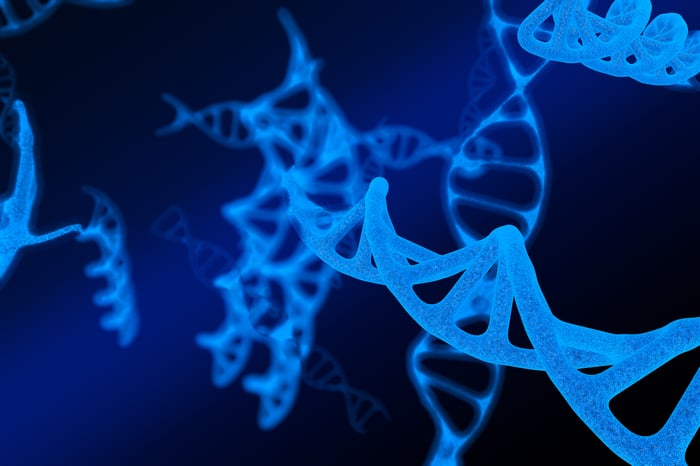 Like most large-cap biopharmas, Amgen is dealing with a host of major patent expirations at the moment. Former stars like Aranesp, Epogen, Neulasta, and Sensipar have all entered their twilight years. On the bright side, Amgen has been able to successfully restock the cupboard through a variety of business development moves.

In the latter half of 2019, for instance, the biotech acquired Bristol-Myers Squibb's blockbuster psoriasis medication Otezla and joined forces with Chinese biotech BeiGene to promote its oncology portfolio in this key emerging market. The net result is that Amgen's top line is now on track to grow by high single digits over the next few years, despite these ongoing patent woes.

In addition to its encouraging near-term growth prospects, Amgen also offers investors one of the best shareholder rewards programs in the industry. Since the launch of its dividend program back in 2011, for example, the biotech has raised its payout by an astounding 471%. That's easily one of the fastest-growing dividend programs in the space. Amgen's forward-looking annualized yield, in kind, presently stands at a respectable 2.73%.

As an added bonus, the company also exited the most recent quarter with a staggering $3.6 billion remaining under its stock repurchase authorization program. And that's after Amgen just spent $1.2 billion on share repurchases in the third quarter of 2019.

Last but certainly not least, Amgen's stock sports a fairly reasonable valuation at 14.67 times forward earnings. Now, Amgen's stock is a tad pricey for a large-cap biotech, to be sure, but there is a solid reason the market has built in this modest premium over the course of 2019. Namely, Amgen has one of the highest free cash flows within its peer group, an exceedingly rich shareholder rewards program, a topflight clinical pipeline, a better-than-average near-term outlook on the revenue side, and an enormous financial capacity for business development.

Amgen's stock has been among the best-performing large-cap biotechs in 2019. Nonetheless, the best could be yet to come. Amgen's pipeline of next-generation oncology drugs, diverse portfolio of biosimilar medications, generous shareholder rewards, and top-shelf dealmaking capacity should act in concert to keep its shares headed higher for the foreseeable future. Growth, income, and value investors alike should strongly consider adding this name to their portfolios in 2020.