Align Technology (NASDAQ:ALGN) has been a great stock for almost 20 years, with returns of more than 2,000% for its investors over that timeframe. SmileDirectClub (NASDAQ:SDC) just had its initial public offering a few months ago, and its investors aren't smiling at all, as the stock has dropped 60% from its opening-day $23-a-share price.

Will Align Technology continue to reward its shareholders? Or will SmileDirectClub (SDC) disrupt the entire orthodontics industry? We'll judge these dental-alignment company stocks on the basis of seven criteria, giving each category equal weight. 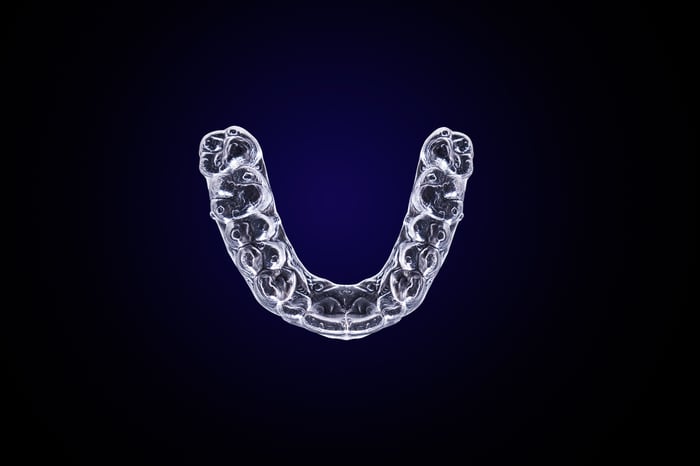 Align runs away with this one, having made significant coin for its investors. In the last two years, the stock has had a bit of a rollercoaster performance but has still managed a 27.6% return year-to-date in 2019. That level of return far outshines the 65%-plus loss SDC investors have had so far.

Venture capitalists created the Rule of 40 to measure software-as-a-service start-ups. But the rule has a much broader application. Every company needs to have revenue and profits (eventually). Even biotech companies give us the hope of future profits. So let's apply the rule to these two stocks.

The mechanics are quite simple. You take a company's year-over-year revenue growth (in percentage points) and add to that number the company's profit margin. If the result is over 40, you have a financially strong company.

Align Technology has a profit margin of 18%, which is pretty good, and revenue growth of 20%, which is OK. Adding these two numbers, you have a 38. It's close, but it still fails the test.

SmileDirectClub had outstanding numbers when it went public. Reported revenue growth was 113%. And the profit margin was a negative 16, for a wonderful Rule of 40 score of 97.

But in its first reported quarter as a public company, SDC disappointed.  Revenue growth dropped to 51%, a notable decline. Gross margin is still outstanding at 77%. There are software companies that don't have gross margins that high. But the company's net profit margin is still negative. The company is spending heavily on marketing, plus it has legal expenses while it fights the orthodontics industry. The company reports an EBITDA number of negative 25%. Subtracting 25 from 51 gives us a 26. Right now, both companies are failing the Rule of 40 test.

The idea with this criteria is to try to estimate how high your stock can go. Small caps are often seen as more dangerous than large caps because large caps have a history of success. (That's how they became large). But small caps have a not-so-hidden advantage for stock investors: Their upside is huge. Assuming you have invested in the right small-cap, your 10- or 20-year returns will be astronomical.

The total addressable market is important because niche businesses don't grow up to be mega-caps. What you hope to see as an investor is a small-cap dominating a market that is growing by leaps and bounds. For growth investors, the large market opportunity is better than small. And small-capitalization is better than large.

Align Technology has a sizable market cap (almost $22 billion). SmileDirectClub is much smaller, at $3 billion. The two companies are indirect competitors in the same industry. And both companies are chasing a huge market opportunity.

Align Technology provides clear dental aligners that are far more popular than metal braces. But the company's aligners have come off patent, opening the door to multiple competitors that are offering a generic version of the clear aligners. First among those competitors is SmileDirectClub, which is disrupting the orthodontics industry by offering a much cheaper version of the aligners, direct to consumers. Simultaneously, SDC is expanding the market opportunity, because the high price of orthodontics keeps a lot of potential customers from using the service.

Align's market opportunity is shrinking because the company has to ward off cheaper competition from multiple generic copycats. Losing patent protection is a very big deal to healthcare companies. In the pharmaceutical industry, sales drop precipitously whenever a drug comes off-patent.

It's simplistic but true: Cash is way better than debt. Cash gives you unlimited options. With cash, you can grow your business in good times and grab market share in bad times. What do I do with all my cash? That is a great problem to have. Debt is the polar opposite. You're going to have to repay it. Meanwhile, interest is compounding against you. And the clock is ticking.

SmileDirectClub has $547 million in cash and $219 million in debt for a net cash position of $328 million.

Not surprisingly, the much larger Align has a bigger stash of cash. The company has accumulated $782 million over the years, and it only has $57 million in debt for net cash of $725 million.

Often when you're investing in a company, you're investing in its leader as well. While judging character is very subjective, there's at least one objective criterion we can find. Does the CEO have skin in the game, with significant shares in the company? What's exciting is when you have an entrepreneur with vision, who started the company from nothing. And now, when you invest, you're on the ride with this person. Your interests are aligned.

In the case of Align Technology, the CEO is Joe Hogan, who has been CEO for a little over four years. He is the former CEO of ABB, a multinational automation company, and before that he worked at GE a number of years.

SmileDirectClub was founded by a couple of millennials, Alex Fenkell and Jordan Katzman, who are both on the board of directors and are actively working with the company. Both men own a sizable number of shares (70 million and 76 million, respectively). Katzman's father, David Katzman, is CEO and owns 96 million shares.

These men started the company in 2014. All of them have more experience in the industry (five years) than Align's new CEO (four years). But the biggest difference is insider ownership and all the motivations that go along with that.

Both companies have issues here. SmileDirectClub is facing possible new regulations on its business in California, Alabama, and Georgia. And there's the possibility of multiple class-action lawsuits on the basis of its falling stock price. Not to mention an orthodontics industry that would like to destroy the upstart. So SDC certainly has its hands full.

Meanwhile, Align Technology has a rather serious problem in that numerous competitors are now using its own technology against it, offering cheap generic versions of its Invisalign solution. This competitive threat will very likely cause Align to lower its prices and compress its margins.

SmileDirectClub is trading at a little under five times sales and a little over twice its book price. Meanwhile, Align is trading at nine times sales, and 16 times its book price. Right now, the market has shares of SmileDirectClub on sale, while Align's high prices reflect its historic success in the market. On a valuation basis, SDC is cheap and ALGN is selling at a premium.

When you add up the winners and losers in the various categories, SmileDirectClub has a slight advantage over Align Technology.