What makes a stock a "top stock?"

There are probably as many definitions out there as there are investors. Some will emphasize deep value, others will focus on rapid growth, and still others will prefer a great dividend. But really, with nearly 8,000 publicly traded stocks to choose from, I wonder: Why should you have to choose? You've only got a limited amount of money to invest, after all. Instead of compromising on stocks that have just one or two of these qualities, why not insist on all three?

That's why today we're going to be looking for stocks selling cheaper than the average price-to-earnings ratio of 23.5, growing faster than the 10% average growth rate projected for the S&P 500, and paying more than the 1.9% average dividend yield. According to the stock screener at finviz.com, however, that still leaves us with 142 stocks to choose from, so to narrow the field even more, we're going to insist on an absolute stock price of less than $20 -- so once you've found a top stock, you can buy a lot of shares of it. 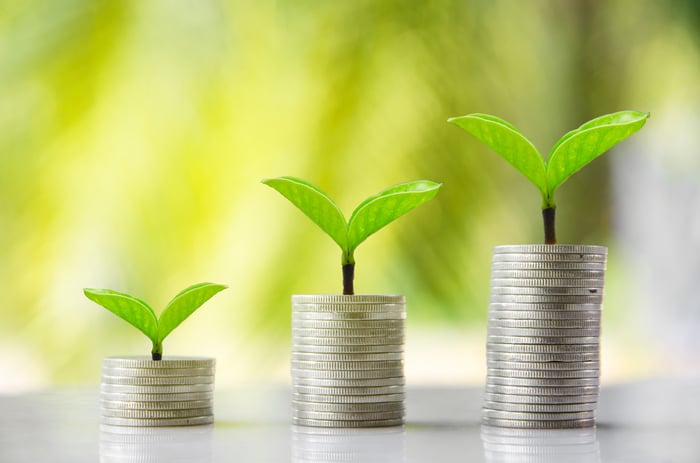 The telecom sector has historically been a happy hunting ground for investors seeking a good combination of modest prices, good growth rates, and generous dividends -- and it remains so today. Our first candidate from this industry today is Turkcell Iletisim Hizmetleri.

There's a lot to like about Turkey's largest mobile phone company, beginning with a low P/E ratio of just 8.2 (based on data from S&P Global Market Intelligence), continuing through a fast projected growth rate of 14.3% over the next five years, and including a 3.4% dividend yield that is about 70% more generous than the average S&P stock.

Despite all the bad news about Turkey and its economy these past few years, Turkcell has actually managed to grow its revenue 25% year over year in the first nine months of 2019. And earnings are up even more strongly, more than doubling in the same period, with free cash flow rising in tandem. All of this suggests that Turkcell -- if not the entire Turkish economy -- is currently in the midst of a rebound in fortunes, and poised to outperform going forward.

With Turkcell's PEG ratio (that's the P/E ratio, divided by the consensus growth rate) now a lowly 0.6x, I think this stock should be a top pick for value investors, growth investors, dividend investors -- heck, for investors, period.

Our second top stock candidate today also hails from the telecom-sphere, and like Turkcell in Turkey, it's the biggest mobile phone provider in its country -- France, this time.

Perhaps because it's based in a more developed country, much of the discount in valuation that investors inflict upon Turkcell is absent from Orange. Orange's P/E ratio is roughly twice that of Turkcell -- 16.3 times trailing earnings. Operating in a more developed economy also means less opportunity for growth, and analysts are forecasting only 11.3% long-term growth rates for Orange.

Moreover, offsetting the slower-than-Turkcell growth rate is a much more generous dividend yield at Orange -- 5.2%, or more than twice the S&P 500 average -- which Orange can maintain because it's got a more stable business. Revenue at Orange today is within 1% of what it was five years ago. And yet, net income at the company is more than twice what it was back in 2014, creating plenty of cash with which to fund the dividend.

Long story short, you might not get rich quickly by investing in Orange. But with the company's projected growth rate and dividend yield adding up to a likely 16.5% total return on the stock, Orange's 16.3 P/E ratio seems like a more than fair price to pay for this French telecom stalwart.

Switching gears here at the end, our third and final "top stock under $20" today is Farmers National Banc Corp, a small-cap bank (market cap: less than $500 million) servicing both commercial and retail customers in Ohio and Pennsylvania. Now, some of you may worry that the phrase "small-cap bank" sounds even riskier than "Turkish telecom" -- but not to worry. Farmers National is actually a fine business to consider investing in.

Beginning with the basics, Farmers sports a 12.5 P/E ratio, far cheaper than the average S&P 500 stock. And because it's smaller and perhaps nimbler than its larger rivals, analysts polled by Yahoo! Finance predict the company will grow faster than average as well. 18% annualized earnings growth is projected over the next five years.

Farmers' dividend yield is likewise well above average, yielding 2.5% -- on par with the 2.7% yield at a much larger bank such as JPMorgan Chase. And speaking of banking comparisons, I'd point out that two key statistics for measuring bank efficiency of operations -- return on assets and return on equity -- also compare favorably to Farmers' much better-known rival. While Chase scores a 1.3% ROA and 13.4% ROE, Farmers boasts a 1.5% ROA and a 12.8% ROE.

Which just goes to show: You don't always have to be a big stock to be a top stock prospect.