Please ensure Javascript is enabled for purposes of website accessibility
Log In Help Join The Motley Fool
Free Article Join Over 1 Million Premium Members And Get More In-Depth Stock Guidance and Research
By Rich Smith - Dec 19, 2019 at 10:33AM

The Berkshire CEO has $128 billion burning a hole in his pocket. Here are some places to spend it.

Warren Buffett has a problem.

Arguably the best value investor in history (and certainly the best-known), Berkshire Hathaway CEO Warren Buffett famously seeks out high quality businesses with wide economic moats. He buys "great" businesses at "good" prices -- rather than merely good companies that have sunk to prices that are great. Still, the price has to be right, or at least "good", before he will put money on the table.

This means that from time to time Buffett will get outbid. For example, just last month CNBC reported that a Berkshire bid for Tech Data Corporation was trumped when rival private equity firm Apollo Global Management raised its offer to $145 a share -- $5 more than Buffett wanted to pay.

For Berkshire shareholders, Buffett's failure to acquire Tech Data was probably good news. TDC shares had appreciated 75% this year alone, and were starting to look a mite pricey. But this still leaves Buffett with his problem: Berkshire Hathaway has $128 billion on its balance sheet, and needs to find a place to spend it -- otherwise, at near-zero interest rates, that cash is going to be a drag on Berkshire's returns. 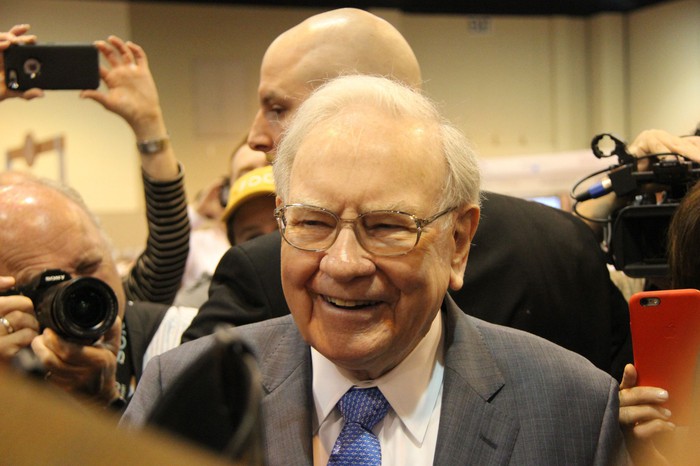 Is it crazy to suggest that a company best known for selling humdrum products such as car insurance, batteries, and ice cream could swallow the world's biggest pure-play defense contractor?

Maybe it is crazy. And yet the numbers can't be denied: Berkshire Hathaway has $128 billion in cash on its books, and every share of Lockheed Martin stock in existence only adds up to $109 billion in market capitalization ($121 billion with debt included). That makes such an acquisition, if not likely, then at least conceivable.

And there's a lot for Warren Buffett to like about Lockheed Martin. If you're looking to own a "great" business, well, the premier weapons manufacturer in the world fits that definition to a "T". Lockheed Martin earns robust profit margins of 14%, not far behind Berkshire's own 15.5% operating margin. And were Berkshire to absorb Lockheed, it wouldn't need to pay out the latter's robust 2.5% dividend yield anymore -- probably boosting profitability to above the Berkshire average.

Lockheed also clearly has the "moats" that so thrill Mr. Buffett. It manufactures the F-35 stealth fighter jet (America's only fifth-generation fighter in production), the F-16 Falcon (the world's most popular fighter jet), and the Black Hawk helicopter, too -- all franchises that are nigh unassailable in the weapons market.

Long story short, Buffett might never buy Lockheed -- but he could.

A few years ago, Buffett famously admitted that in his fear of investing in technologies he didn't fully understand, he failed to invest Berkshire cash in Google and Amazon.com despite strong hunches that he should've.

Perhaps he should overcome those fears, though -- and consider an investment in Twitter.

In stark contrast to giant Lockheed, Twitter is priced at a lowly market cap of $24 billion -- practically snack-sized for a company with as much cash to spend as Berkshire has lying around. And alongside archrival Facebook, which targets a different kind of audience, it's one of the two dominant social media enterprises on the planet.

Simply put, Twitter stock has "moat" written all over it.

Twitter also has a lot going for it as a stock. Over the past year, Twitter has shed 7% of its market capitalization, and is now lagging the S&P 500 by more than 32 percentage points. Part of the reason for this: Last quarter's earnings were abysmal, with GAAP profits falling 95%.

Yet even so, Twitter's business is growing. Sales rose a respectable 9% even as profits fell, a consequence of temporary (and fixable) "revenue product issues and greater-than-expected advertising seasonality in July and August." And despite the Q3 hiccup, trailing-12-month profits at Twitter are still robust enough to give this stock a 15 P/E ratio.

Long story short, while earnings growth concerns may have scared some investors away from Twitter, pushing its price level down to "good" levels, I still think this is a "great" business to own.

Of course, it's always possible that Mr. Buffett will prefer to stay in his wheelhouse and spend his money on the business model he knows best -- and from his early days investing in GEICO, that business has always been insurance. In that case, let's consider the possibility of a purchase of Humana.

One of America's premier providers of health insurance, Humana at first glance looks like a pretty low-margin business, earning GAAP net profits of just 4% on its revenue collected. These profits give the stock a P/E ratio of 19.3 -- cheaper than the average S&P 500 stock to be sure, but still not obviously "cheap".

Closer examination, however, shows a lot to like about Humana. Last quarter's sales performance, for example, showed revenue growth of 14%, far in excess of earnings growth of only 7% -- suggesting there's room for profit margin expansion. Its free cash flow over the last 12 months, at a stellar $3.8 billion, also suggests that it has room to grow profits -- that's 47% more than the $2.6 billion in GAAP net income Humana reported. As profits rise to more closely resemble free cash flow over time, I have a suspicion we'll see Humana's GAAP profit margin improve.

For a modest $48 billion purchase price, Warren Buffett could buy Humana lock, stock, and barrel, and enjoy those rising profit margins for years to come.