It's shaping up to be a cross-border showdown with our neighbors to the north! No, I'm not talking about the Rivalry Series in women's hockey (in which the U.S. women just took the first win 4-1); I'm talking about a showdown between energy pipeline operators.

OK, a hockey match might be more exciting, but investing in Canadian juggernaut Enbridge (NYSE:ENB) or U.S. giant Kinder Morgan (NYSE:KMI) could be even better for your wallet, and you don't even have to find a bookie! Let's compare these two heavyweights of North American energy to see which looks like the better buy right now. 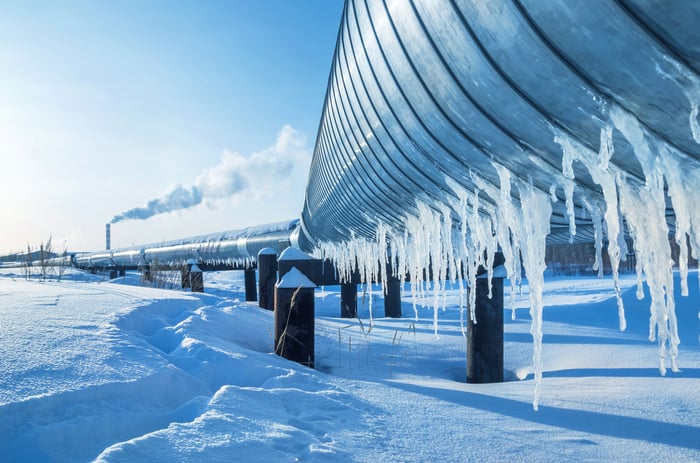 Which of these top North American pipeline companies is the best to buy right now? Image source: Getty Images.

You're probably going to be looking at these companies for their dividends. Both sport high yields right now. Kinder Morgan is currently yielding an impressive 4.7%; Enbridge's yield is a full percentage point higher, at 5.7%. However, that's not the end of the story.

While Enbridge has been increasing its dividend by low-double-digit percentages each year for the last three years, Kinder Morgan has doubled its dividend payout during that time. Furthermore, Enbridge has signaled that it may have to ease off of its double-digit dividend increases beyond 2020, as it expects expansion to slow. That leaves one final big hike for Enbridge in 2020, which it has projected will be 9.8%, enough to boost its yield to about 6.3%.

There's another factor to consider, too. Between 2015 and 2016, Kinder Morgan slashed its dividend by 75% to deal with a deteriorating balance sheet, and its recent dividend hikes have essentially been recovering lost ground. Meanwhile, although Enbridge's yield has sometimes gone down for U.S. shareholders as a result of currency fluctuations, the company has never cut its dividend, and currently maintains a very conservative 65% payout ratio. 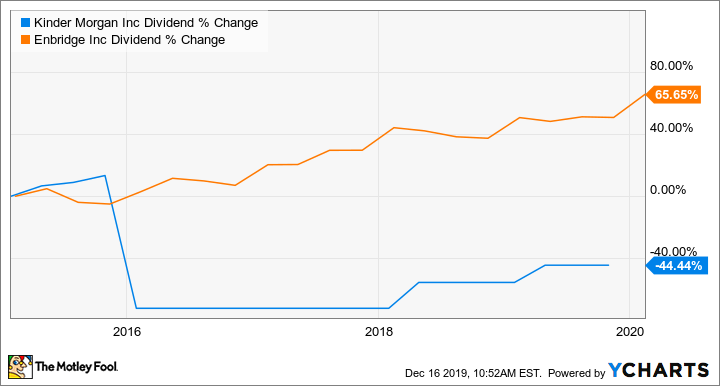 When it comes to a dividend, reliability is just as important -- if not more -- than yield. Enbridge takes this category.

When evaluating which of two companies is a better buy, you should always take a look at valuation metrics. The most common valuation metric is the classic price-to-earnings ratio. Enbridge's P/E ratio is lower than Kinder Morgan's, 17.8 to 22.8 (and lower is better for valuation metrics), but let's look a little deeper.

For many energy infrastructure companies -- like these two pipeline operators -- P/E only tells part of the story. That's because the "earnings" in the ratio are affected by depreciation, which tends to be quite high in this sector. A better metric to look at is enterprise value to EBITDA, which strips out depreciation. From this standpoint, Kinder Morgan's 11.8 not only bests Enbridge's 13.3 but also is the lowest among large North American pipeline corporations.

With a slightly better valuation based on EV-to-EBITDA and price-to-per-share-cash-flow ratios, Kinder Morgan ekes out a win in this category.

Right now, it's a tie game. But the real question for these companies is how they'll perform in the future. Let's take a look at their growth prospects to see how they might fare. Kinder Morgan is focused primarily on natural gas, and operates the largest natural gas pipeline network in North America. Meanwhile, Enbridge is more diversified.

Enbridge has a big natural gas pipeline network, for which it's planning to open a new pipeline expansion -- Spruce Ridge in Western Canada -- in 2021. It's better known as the operator of the world's largest crude oil and liquids pipeline network, and it has an interest in the 850-mile Gray Oak Pipeline in Texas, which is expected to come on line in Q1 2020. All told, Enbridge has about 10 billion Canadian dollars ($7.5 billion) in expansion projects slated through 2023.

Enbridge is more than just a pipeline company, though. It doubles as Canada's largest gas utility, providing the gas it transports directly to consumers in Ontario and Quebec. The company has even begun to branch out into renewable energy, adding offshore wind farms to its assets under development.

Meanwhile, some investors are a bit worried about Kinder Morgan's growth prospects. The company recently put two huge projects -- the major Permian Gulf Coast Express pipeline and the Elba Island gas liquefaction and export facility -- into service, but it hasn't announced any major new projects, so it has only $4.1 billion in growth projects in its backlog. To management's credit, it isn't just pursuing growth for growth's sake, but a small backlog could lead to slower growth.

Diversification and a big slate of expansion projects on the docket gives a win to Enbridge.

With a superior dividend yield and dividend history, plus better growth prospects and diversification, Enbridge is the winner here. That's not to say that Kinder Morgan has to take a trip to the penalty box, though. Its valuation is low, and if it announces some major growth projects in 2020, we may need to revisit this matchup.