Shares of Rite Aid (NYSE:RAD) were skyrocketing 45.7% higher as of 10:50 a.m. EST on Thursday after the company announced its third-quarter results before the market opened. Rite Aid reported revenue of $5.46 billion, above the average analysts' estimate of $5.42 billion. The pharmacy retailer posted adjusted earnings of $0.54 per share, blowing past the consensus Wall Street estimate of earnings of $0.09 per share.

The most important thing to know about Rite Aid's Q3 results is that they hold the potential to change the narrative for the company. Rite Aid's problems have been so significant that the company's name even comes up in discussions of which retailers might declare bankruptcy next. But Rite Aid's solid profit in the third quarter should turn the negativity level down -- at least for now. 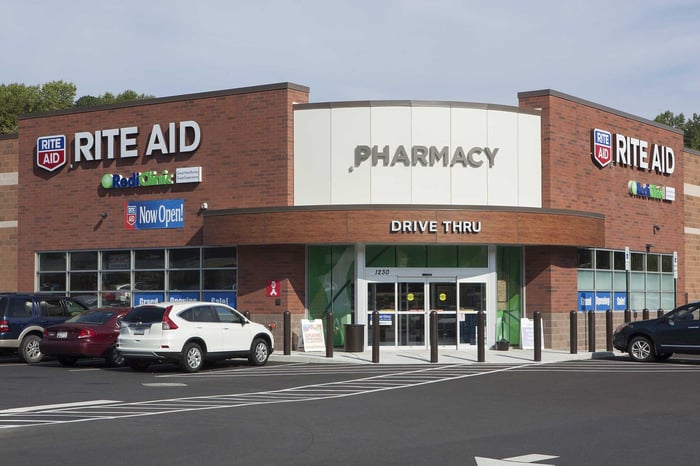 Rite Aid managed to crush analysts' expectations in part due to what CEO Heyward Donigan referred to as "tight expense control." The company's selling, general, and administrative expenses even declined slightly compared to the prior-year period.

The company's total revenue growth of 2% might not seem impressive, but it's a lot better than year-over-year revenue declines that Rite Aid has reported in the past. Although retail pharmacy segment revenue slipped 1.7% in Q3, Rite Aid's pharmacy services segment revenue jumped 5.7% year over year thanks primarily to growth in its Medicare Part D membership.

Investing in stocks involves more than basing a decision on one quarterly update. Rite Aid isn't out of the woods yet. Donigan acknowledged this, stating, "While we are pleased with these results, we have important work ahead of us to put our company on a path to long-term sustainable growth."

Look for Rite Aid's management team to unveil its full turnaround strategy soon. Donigan said that more details of the company's plans will be shared on Mar. 16, 2020, at the company's analyst day.