As Juniper Networks (NYSE:JNPR) and Arista Networks (NYSE:ANET) have been expanding into the same computer network infrastructure segments, they are becoming direct competitors across their portfolios. Both network vendors are also facing challenges in the cloud data center market. But despite its higher valuation, one of them is a better buy for long-term investors.

Juniper started its business a couple of decades ago selling high-end routers -- network devices that forward data packets between computer networks -- to service providers, mostly. The company expanded into the campus market, which requires less-performant network devices to connect end users and local networks together. With its cybersecurity offering and its acquisition of the wireless vendor Mist Systems in April, Juniper's portfolio now covers pretty much the whole network infrastructure spectrum.

But with the explosive growth of cloud computing, Juniper met some challenges. Cloud vendors have been migrating from Juniper's legacy feature-rich MX routers to the new PTX routers that better address cloud titans' needs in terms of flexibility and performance. These new routers command lower average selling prices, though.

Yet the company remains profitable, with an operating margin of 12.2% under generally adopted accounting guidance (GAAP) during the last quarter. And since the migration from MX to PTX routers is ending, management is confident in growing revenue again over the next several quarters. But this growth still must materialize, and Juniper is facing intensifying competition from Cisco Systems and Arista, among others. 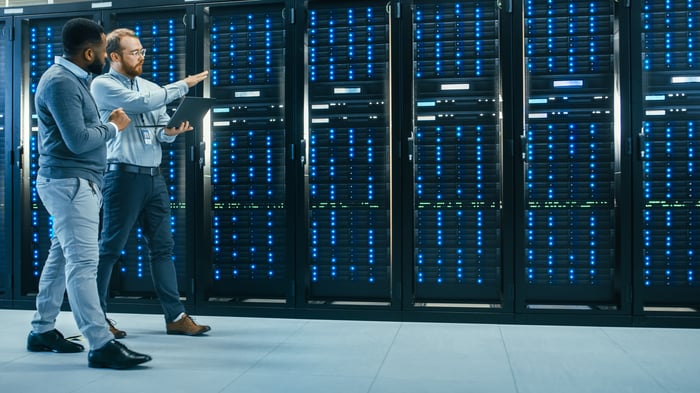 As a result, revenue increased from $1.65 billion in 2017 to $2.45 billion over the last twelve months. However, management expects year-over-year next-quarter revenue to decline by 8%, based on the midpoint of its guidance range.

This underwhelming expected performance seems temporary, though: With a few huge customers such as cloud titans that represent an important part of the company's revenue, Arista is exposed to the timing of their spendings. For instance, during the last earnings call, management indicated Microsoft and Facebook would each represent more than 10% of the company's full-year revenue.

But with no structural changes in the cloud network data centers, Arista's portfolio remains relevant, and several studies by research companies such as Gartner and Forrester Research position Arista as a leader in this market, way ahead of Juniper.

Since the company addresses concentrated cloud titan customers, its sales and marketing expenses stay low, and its GAAP operating margin of 34.9% during the last quarter remains impressive. However, you should keep in mind Arista faces the increased risk of those customers leaving.

The price of quality

Based on many ratios, the market values Arista at a premium compared to Juniper, as shown in the table below.

Given the company's strong performance, the market considers Arista as a growth stock and its higher valuation makes sense. In addition, Arista has been generating much higher margins than Juniper thanks to its reduced sales and marketing expenses as a percentage of revenue. In contrast, Juniper's revenue has been decreasing over the last few years and the success of its PTX routers remains uncertain.

Thus, despite its higher valuation and its temporary challenges, Arista seems to be a better buy, thanks to the strength of its business over the long term.