On the other hand, if you buy UTC stock, you will end up owning 57% of Raytheon Technologies plus Carrier and Otis stock. While the latter are attractive businesses in their own rights, it's clear that its UTC's aerospace businesses that have been outperforming lately, and investors interested in Raytheon Technologies are likely to be more focused on aviation and defense and therefore to favor Raytheon as the way to get exposure.

The new company is set to start with $26 billion of net debt ($24 from UTC and $2 billion from Raytheon), which implies the enterprise value (market cap plus net debt), or EV, of the new company is being set at $167.2 billion.

Now it's time to take a look at what the earnings of the new company could be and then see if the $167.2 billion valuation makes it a good value. Digging into UTC's filings at the Securities and Exchange Commission (SEC), here's a summation of analysts' forecast in the S-4 form filed in connection with the merger. (For reference, EBITDA is earnings before interest, tax, depreciation and amortization.)

As you can see below, Raytheon Technologies is expected to grow EBITDA in the mid to high single digits in the next few years. 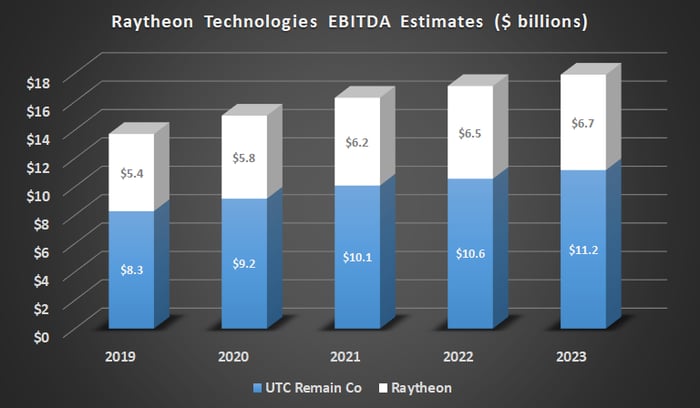 Taking these figures for EBITDA and then applying the implied EV of $167.2 billion gives the following EV/EBITDA and EV/EBIT multiples for the new company.

Frankly, these implied valuations make the stock look attractive. For example, here's a look at EV/EBITDA and EV/EBIT multiples across the sector. For reference, the new company will generate around 54% of its sales from defense (primarily Raytheon's missile, intelligence, and defense systems and UTC's mission systems) and 46% from commercial aviation (primarily UTC's Pratt & Whitney and Collins Aerospace). 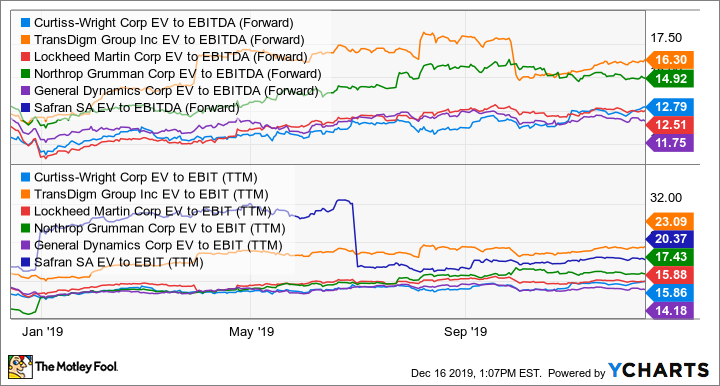 Based on the data above, target valuations of an EV equivalent to 13 times forward EBITDA and 15 times current EBIT look reasonable. As you can see, the implied valuation for Raytheon Technologies suggests buying Raytheon stock is a good idea. For example, a forward multiple of 13 times 2020 EBITDA gives an EV of around $195 billion, and stripping out the $26 billion in net debt gives a market cap of $169 billion -- some 20% above the theoretical market cap (calculated above using Raytheon's current market cap) of $141.1 billion.

Frankly, both Raytheon and United Technologies look like good values, but the lack of exposure to Carrier and Otis probably makes Raytheon the preferred route to get a piece of what might be the most exciting merger to take place in 2020. Moreover, United Technologies has a pretty good track record of integrating acquisitions, with the company exceeding its cost-savings targets for the Goodrich and Rockwell Collins deals. All told, Raytheon is an attractive stock for 2020.