Please ensure Javascript is enabled for purposes of website accessibility
Log In Help Join The Motley Fool
Free Article Join Over 1 Million Premium Members And Get More In-Depth Stock Guidance and Research
By Lee Samaha – Oct 25, 2019 at 8:07AM

The industrial giant is looking like an attractive investment, but a future partner may be a better one right now.

Not counting peers like Honeywell (HON -1.08%), General Electric (GE -1.24%), and others, United Technologies Corporation's (RTX -1.70%) earnings have a direct relevance to five companies -- some of which don't even exist yet. The five are UTC itself; its future merger partner Raytheon Company (RTN); the future merged company Raytheon Technologies; and the two companies that UTC will spin off -- Carrier and Otis.

So, in light of the earnings report, United Technologies investors should ask whether one of the other investment options is also a good value. Here's the lowdown.

What United Technologies will be in the future

Digging into the details of UTC's earnings reveals a familiar refrain from previous quarters' earnings -- aerospace is outperforming the rest of the company.

Digging into the operational reasons for the guidance hike, it's clear that, once again, it's down to Collins Aerospace offsetting weakness at Carrier. Honeywell had already reported another strong quarter of aerospace aftermarket sales growth, so it was no surprise to see Collins Aerospace increase commercial aftermarket sales by a whopping 17% -- this bodes well for General Electric's upcoming earnings report -- and management upgraded full-year commercial aftermarket sales growth guidance to "up low teens" from "up high single" digits previously.

Meanwhile, Pratt & Whitney continues to perform as expected, notwithstanding the need to work on fixing a problem on the GTF (geared turbofan) engine for the Airbus A220.

There was positive news for Otis: The business returned to overall growth in new equipment orders, and, crucially, continued to grow equipment orders in the all-important China market -- a key strategic aim which will drive lucrative service revenue in the future. 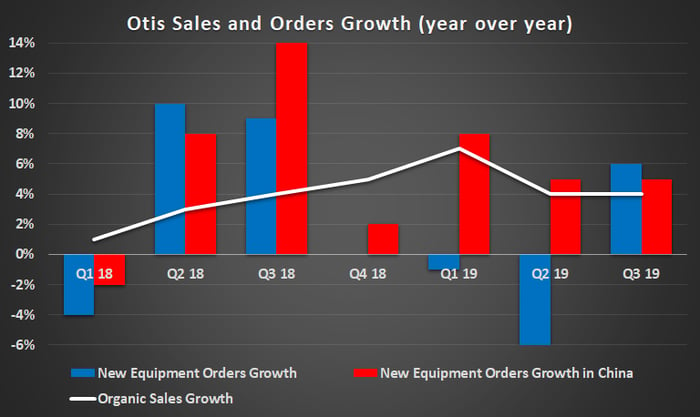 Carrier had another disappointing quarter. Management reduced full-year guidance (see the table above), largely on the back of weakness in transport refrigeration, foreign currency movements, and the residential heating, ventilation, and air-conditioning market. Carrier is a very interesting business because of its potential for improvement following the spinoff, rather than its performance right now -- something value investors will be attracted to.

What this all means to investors

That said, if aerospace is UTC's strength, then it probably makes more sense to buy Raytheon and wait for the merger, rather than buy United Technologies before the separation of Carrier and Otis. Meanwhile, value investors should keep a close eye out for the Carrier spinoff next year.