With the arrival of winter, theme parks start closing down operations at their cold-weather properties. For regional operator Six Flags (NYSE:SIX), underwhelming results headed into the slow time of year has sent shares down 17% year to date with less than two weeks left to go in 2019. Its peer Cedar Fair (NYSE:FUN) has fared much better with a 19% gain on the year, but it too is off its recent highs.

Neither theme park operator is likely to put up sizzling growth to match the thrills they offer guests, but that's okay. These are two income stocks that each yield about 7% as of this writing. That could be a nice addition for those looking for a refresh to their income portfolio with 2020 getting ready to begin. 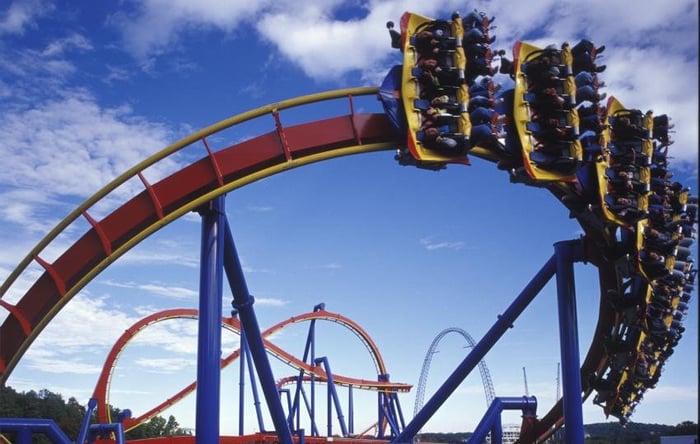 The big thrills leader, by a small margin

By way of review, Six Flags is the world's largest regional theme park operator with 26 locations in North America and a handful running overseas. While roller-coasters and water parks aren't exactly a growth industry, the company's strategy in recent years has been expansion via acquisition as it tries to increase the number of consumers who live near a Six Flags property. In June 2018, it acquired five parks from EPR Properties and took over a water park in Illinois in 2019. More recently, talks to take over its smaller rival Cedar Fair were rebuffed, kicking off the most recent slide in share prices.

Paired with Active Pass -- an annual membership bid to encourage guests to attend parks more frequently -- revenue has slowly yet steadily increased over the last decade. Free cash flow (money left after operating and capital expenses, and from which dividends are paid) has fallen as of late, though, due to Six Flags' expansion efforts and lower per-guest spending. Still, after an 8% and 5% rise in revenue and earnings per share, respectively, in 2018, Six Flags is having a decent 2019 so far as it heads into the slow season.

Not bad, considering Six Flags has ample competition in the entertainment space, including new Disney Star Wars: Galaxy's Edge parks in California and Florida -- although results in 2020 will be more telling, as the main attractions at the Star Wars destinations didn't open until the fourth quarter of 2019.

Six Flags is doing well, and its failure to consolidate with Cedar Fair isn't the end of the world. After all, it is opening a roller-coaster venue in Qiddiya, Saudi Arabia, the affluent country's new capital of entertainment as part of its "Vision 2030" effort to diversify away from oil industry dependence. When that park opens in 2023, it should be a nice profitable addition to the company's portfolio.

In the meantime, investors get treated to a 7.2% annual dividend, thanks to the stock's tumble this year, and that includes a recent quarterly payout hike of $0.01 per share. Not the biggest pay raise ever doled out, but it is a sign the company is at least on solid footing. Total long-term debt is $2.27 billion, but that's serviceable given the $265 million free cash flow over the last 12 months. That also values shares at 14.8 times free cash flow, a reasonable price for a high-yield play.

A regional play with a twist

Smaller regional park operator Cedar Fair -- owner of its namesake parks Cedar Point and Valleyfair -- technically isn't a stock at all but rather a master limited partnership (MLP). As such, it makes quarterly cash distributions per MLP unit, good for a current annual yield of 6.7%. One note of caution: As an MLP, owning Cedar Fair in a retirement account (including in an IRA or 401k) could create some tax liability and other complications in spite of retirement accounts' general tax deferral benefits. You can read more about that here.

Similar to Six Flags, Cedar Fair has also been growing via takeover. Over the summer, it acquired the land under its Great America park in Santa Clara, California (previously under a lease agreement with the city), and the company also acquired two water parks and a resort in Texas. As a result, Cedar Fair now operates 17 theme and water parks and a resort across the U.S. and Canada.

Though Cedar Fair has also made use of debt over the last decade (total long-term debt was at $2.16 billion at the end of the third quarter), it's obvious why Six Flags made a bid for its slightly smaller peer. Cedar Fair generates more revenue and profit per park and has also been putting up strong growth numbers this year. The MLP also recently raised its quarterly distribution by a penny to $0.935 per unit, saying it would be focusing in the near term on paying down debt instead of giving bigger payouts. Still, business is looking good headed into 2020. Management said the start of its season-pass sales was the best ever, and there are new attractions opening at all of its parks next year.

Units of Cedar Fair are up 19% year to date, but they still trade for just 17 times one-year forward earnings. With the company walking away from the proposed Six Flags merger, it seems like a good bet for investors looking for passive income -- as is Six Flags stock after its most recent stumble and resulting high yield. With American consumerism going strong, these amusement park stocks look like good dividend portfolio additions headed into the new year.