Most investors will have glossed over the news that beverage giant Coca-Cola (NYSE:KO) has named Manuel Arroyo, president of the company's Asia Pacific Group, as its new chief marketing officer. It's not exactly the highest-profile role or a game-changing one. In fact, Coke did away with the CMO position altogether in 2017, inventing the position of chief growth officer who also handled strategy and operations.

The fact that the role is being reinstituted, however, speaks volumes about how seriously the organization now realizes it must take the matter of marketing. It deserves dedicated, focused direction. It may even have been primary rival PepsiCo (NASDAQ:PEP) that convinced Coca-Cola to reverse the change. 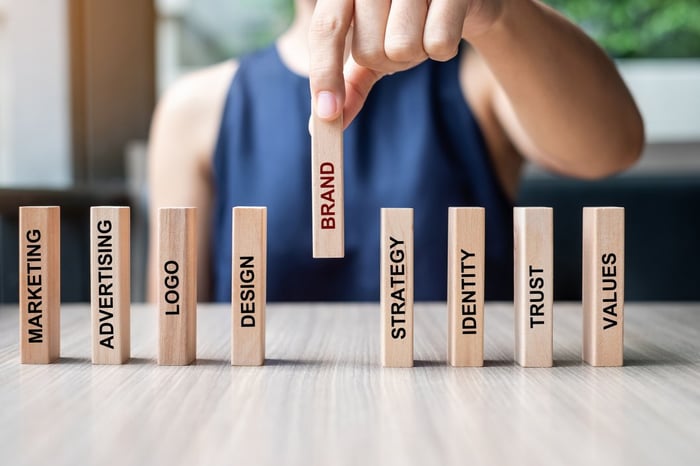 Overreaction to the changing marketplace

It's not terribly difficult to understand why. Marketing has changed dramatically in just the past few years, as have consumer preferences. Cord-cutting and sheer distraction has made television advertising less effective, for example, and while the advent of mobile internet devices is a key part of the reason TV-based marketing is losing potency, digital marketing is even more complicated -- and fragmented. A conventional CMO may or may not be the best way to connect with consumers in this environment.

Yet, not having a CMO since 2017 hasn't proven to be the ideal corporate structure for Coca-Cola either. Last year's organic revenue was up 5%, and while profitability has improved as the company moved away from its bottling business, operating profit growth hasn't exactly been thrilling. A stagnant advertising budget may be at least partially to blame, and a lack of a CMO to fight for that budget may also be a culprit. 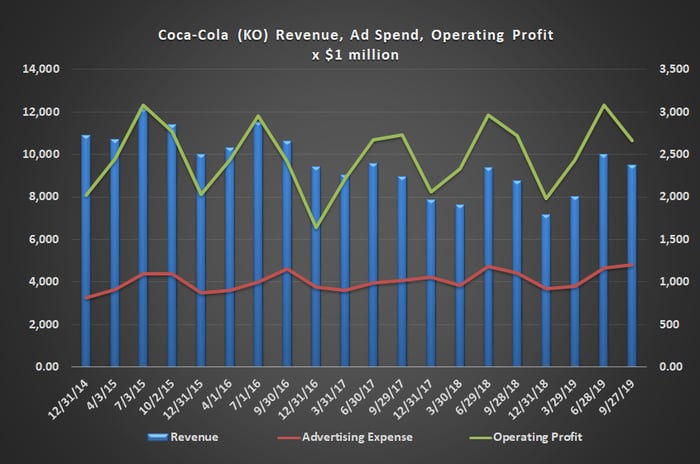 It seems to be working for PepsiCo

PepsiCo, the parent of beverage brands such as Mountain Dew, Gatorade, Tropicana, and Aquafina isn't one of the outfits that abandoned the chief marketing officer position. It's also not pulled back in ad spending either ... quite the opposite, actually. After a period of modest ad spending that led to modest growth, during its third-quarter conference call, the company touted how this year's 12% increase in marketing helped drive a 4.3% year-over-year improvement in third-quarter revenue.

Pepsi's growth has come at a price, to be fair. Last quarter's net income fell 16% year over year, pressured downward by that increased ad and marketing spending. Marketing is more than one quarter's profits though, particularly if it sets the stage for future growth. PepsiCo's now-former CMO Roberto Rios did just that, gathering consumer-specific data that has allowed the company to tailor marketing messages for its customers. That effort was boosted by a loyalty program that ultimately offers cash rewards. And the company has taken focused aim at younger consumers, for example, launching a coffee-infused cola in early December. Coca-Cola's new CMO may need months or even years to fully catch up with the dedicated work that Rios already accomplished.

As evidence that Coca-Cola is finally starting to fully appreciate the importance of an executive that keeps a finger on the pulse of the marketplace, CEO James Quincey conceded earlier this month the company was simply too slow to address renewed interest in sparkling water. An established CMO may well have guided Coca-Cola into that market sooner. Even more telling is the fact that Coca-Cola has now opted to altogether eliminate the chief growth officer job that displaced the chief marketing officer job in 2017.

While the CMO's job description can vary from one company to the next, onlookers are optimistic about the way Coke has structured the role to some degree.

"When Coca Cola dropped the CMO role, it was, perhaps, due to a sense that the focus of what the job should do had been lost," commented Zaid Al-Zaidy, chief executive of marketing agency The Beyond Collective. But he adds, "Now they are reverting back, it is an opportunity to reaffirm the power of marketing in its traditional sense." At Elmwood, a brand consultancy, chief provocation officer Greg Taylor said, "What's needed is someone whose number one job is to know how to stay in tune with people emotionally, to ensure their brands cut through in ways that are more meaningful, memorable, and iconic. The return of CMO at Coca-Cola will help with all of this as the company executes its business strategy to go beyond colas to be a 'total beverage company'."

Investors should track Coca-Cola's renewed marketing efforts in 2020 as Arroyo takes over.