Every time I read a Home Depot (NYSE:HD) quarterly report, I have to stop and marvel at its off-the-charts return on invested capital, or ROIC. This vital metric tracks the percentage return a company earns over the cost of its debt and equity capital. It can be simply expressed as net after-tax operating profit divided by invested capital, which is typically defined as long-term debt plus equity.

In its fiscal third-quarter 2019 earnings report issued in late November, Home Depot calculated its ROIC for the trailing 12-month period at 45.1%. That's a dramatic reading given that ROIC in the teens is usually the mark of a highly functioning company.

Such a lofty ROIC means either that the company is unusually profitable, or that it's extremely efficient at generating financial returns from its invested capital base. We know that while Home Depot is a leader in the do-it-yourself home improvement marketplace, as a retailer, it doesn't possess extraordinary margins. Indeed, in recent quarters, the company's net profit margin has hovered around 10% -- a healthy, though not stellar, level of profitability. Thus, the capital base must be influencing the ratio.

Home Depot's third-quarter 10-Q earnings filing discloses that management calculates ROIC by dividing trailing 12-month net operating income after taxes, or NOPAT, by average debt and equity for the most recent 12-month period. The company generated NOPAT of $11.97 billion over the last 12 months, and its average debt and equity over the same period was $26.5 billion. Home Depot's ROIC of 45% results from dividing $12 billion in after-tax operating earnings into a relatively small invested-capital base (given this level of profits) of $26.5 billion. 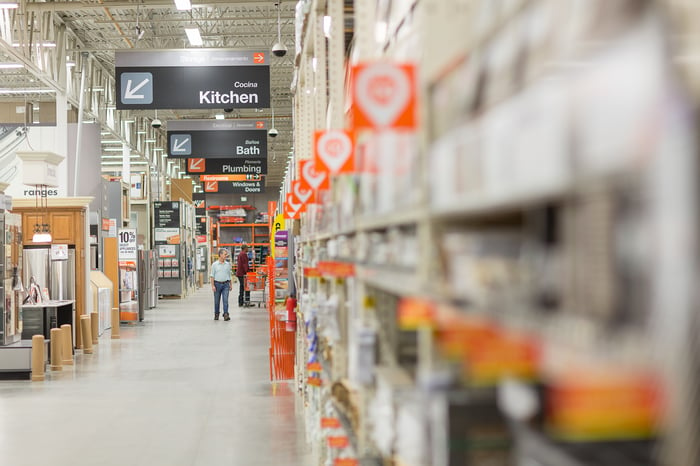 Why the invested capital base seems undersized

Now, if you're an armchair financial sleuth, you may have already guessed that Home Depot must have very little long-term debt on its books, since the average of its debt and equity is so small relative to annual earnings. But this surmise would be well off the mark. The company's average debt and equity over the last 12 months is comprised almost entirely of long-term debt of $26 billion.

In fact, average equity lands at just $500 million over the last 12 months. We'd expect Home Depot's stockholder equity to be much greater than half a billion dollars, given that a corporation's equity reflects, among other items, its cumulative profits since inception. And indeed, Home Depot's retained earnings account, which tracks the sum of all annual earnings less dividends paid out to shareholders, held a robust balance of nearly $51 billion at the end of the third quarter of fiscal 2019.

But this number is offset by an enormous treasury stock balance of $61.8 billion, which also absorbs other positive equity items worth $10 billion (mostly in the form of additional paid-in capital), leaving a stockholders' deficit of $1 billion as of the most recent balance sheet date.

Publicly traded companies account for shares they've repurchased on the open market in the treasury stock account. This account has a negative, or "contra," balance against equity. Cash outflows to purchase common stock are balanced on a company's books by corresponding increases to the treasury account, thereby trimming equity. Cumulative share repurchases, if sizable, can end up not just reducing, but totally negating other stockholders' equity, as in Home Depot's case.

Share repurchases, then, are the factor that skews Home Depot's ROIC into stratospheric territory. Cumulatively, they're reducing the denominator of the ROIC ratio each year, and in turn pushing the calculation up. Knowing this helps us put the company's ROIC in context. And, depending on your perspective, it may dull the sheen of the current 45% benchmark.

On the other hand, it's important to understand that Home Depot's buybacks of common stock, or its payments of dividends for that matter (as mentioned above, dividends reduce retained earnings, so they also diminish the average equity base), have been made possible over the years by its superior cash flow. Rising sales, fast inventory turnover, and the efficient management of overhead expenses have created a reliable annual cash-flow machine. In the first three quarters of fiscal 2019 alone, for example, Home Depot generated $10.6 billion in operating cash flow, in comparison to $8.8 billion of reported GAAP-based net income during the same period.

In other words, the means by which the company has inadvertently inflated its return on invested capital illustrates just how efficient it is in generating cash at scale. So while investors should take Home Depot's ROIC with a grain of salt, to me it remains truly impressive nonetheless.