When purchasing gifts from the luxury of their own homes, millions of grateful shoppers turned to Amazon this holiday season to help them avoid crowded malls. What the majority of them don't know, however, is that they also should be thankful for Plug Power (NASDAQ:PLUG), the supplier of material handling equipment at several of Amazon's fulfillment centers. Plug Power's investors are certainly familiar with the partnership, as it has contributed significantly to the stock's 113% rise since the announcement of the deal.

While fuel cell-focused investors surely recognize Plug Power as one investment opportunity, they are likely also familiar with its leading peers: Ballard Power Systems and Bloom Energy. What they may not know, though, is that Hyster-Yale (NYSE:HY), thanks to its 2014 acquisition of Nuvera, represents another competitor in the fuel cell field -- albeit a more modest one. Let's take a closer look at the two companies to see which one currently represents the better opportunity for investors. 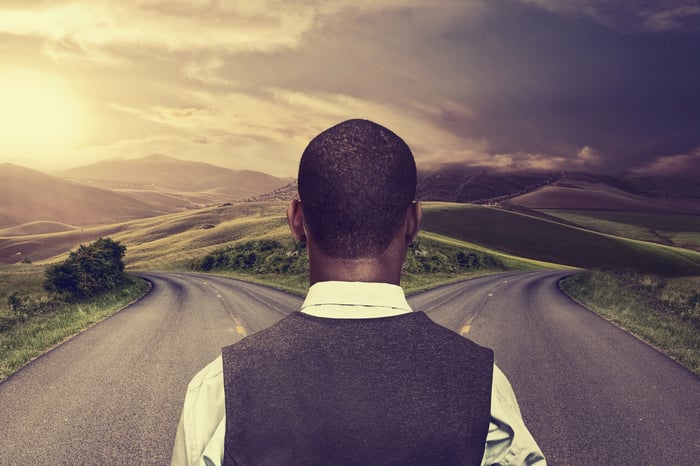 How do these heavy lifters stack up in terms of income?

While Plug Power's prowess in growing revenue at a greater rate than Hyster-Yale warrants recognition, it's the latter company's success at generating profits that also deserves acknowledgement.

Although Plug Power has failed to achieve sustained profitability in its 20 years as a publicly traded company, management forecasts that the next five years will see the company achieving $1 billion in annual revenue, $170 million in operating income, and adjusted EBITDA of $200 million. Management for Hyster-Yale, conversely, hasn't revealed its five-year vision, but considering Plug Power's dubious past of profitability prognostications, investors should be wary. At this point, Hyster-Yale's bird in the hand seems more compelling than Plug Power's two in the bush.

Digging deeper into the disparities

Plug Power's auspicious five-year outlook may get the hearts of some investors racing, but skeptics will rightly want to know how the company plans to finance its growth initiatives. After all, Plug Power has consistently failed to report positive annual operational cash flow. And having reported negative $52 million in operating cash flow through the first three quarters of 2019, it's unlikely that this year will represent a reversal of the trend. It's likely, therefore, that the company will have to continue raising capital by tapping the equity market -- just as it did earlier this month when it raised $110 million through the issuance of 40 million shares. 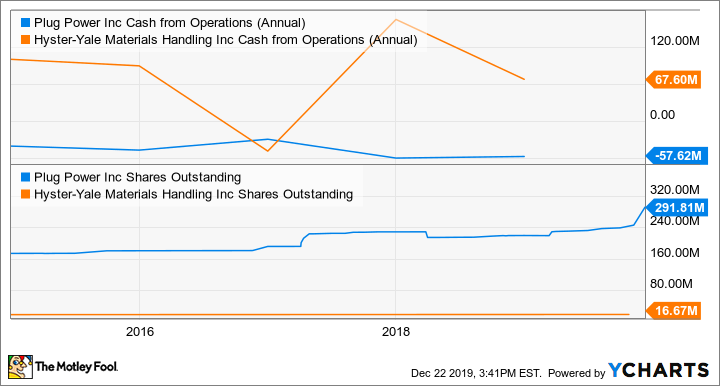 Hyster-Yale, on the other hand, has reported positive annual operating cash flow in every year except for one, stretching back to 2010. For investors solely focused on fuel cells, though, it's important to note that Nuvera contributes a meager amount -- $12.3 million in 2018 -- to Hyster-Yale's consolidated revenue. And like Plug Power, Nuvera has failed to generate positive net income. Management sees this changing in the near future as it expands into the Chinese electric vehicle market, heavy industry market, and other areas. Moreover, in the company's 2018 annual report, management stated its belief that "significantly improved earnings are expected at Nuvera in the 2021 to 2023 period." With the company's strong cash flow generation, it should be able to fund this growth organically and not subject shareholders to dilution like Plug Power.

In light of the steeper risk that an investment in Plug Power represents, it hardly seems that either stock finds itself in the bargain bin.

How to score the match between these material handling mavens

For investors focused on the fuel cell industry, the investment choices are noticeably limited. So while a comparison between Plug Power and Hyster-Yale isn't exactly apples to apples, it is worth examining since Hyster-Yale foresees noticeable growth in the future for Nuvera, positioning it as a potential competitor to Plug Power. While the most risk-tolerant of investors may be attracted to Plug Power's future prospects, it seems that Hyster-Yale would be a better opportunity for conservative investors. In the coming quarters, it will certainly be interesting, nonetheless, to see if Plug Power reports progress toward its five-year growth forecast.