Match Group (NASDAQ:MTCH) is getting its walking papers. Parent company IAC/InterActiveCorp (NASDAQ:IAC) said it had reached a definitive agreement to completely spin off its 80% stake in the dating site, a deal that had been approved by the board of directors of both companies.

It brings to a conclusion a story arc that is familiar to IAC shareholders, as the tech holding company regularly incubates businesses before spinning them off. Among other companies IAC has shepherded through the process are Expedia, HSN, and LendingTree. It also plans to spin off ANGI Homeservices once the Match deal is done.

The question for investors is whether Match Group stock remains a buy after the spinoff is complete. 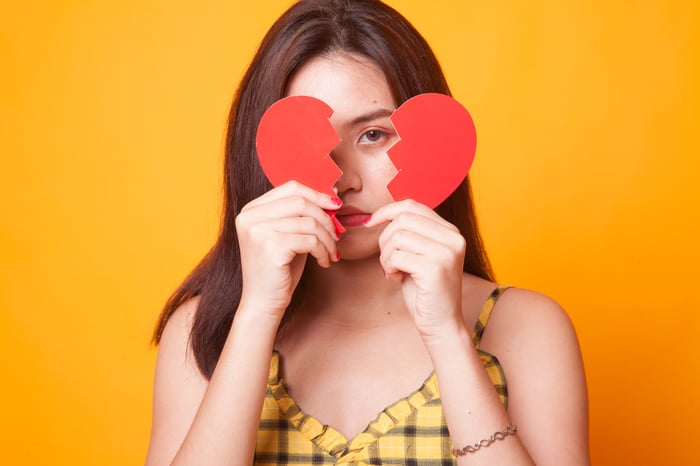 Certainly, at a surface level, there is a lot to recommend Match Group shares. Wall Street is on board with there being more liquidity in its stock, as the transaction will eliminate its current dual stock structure.

That alone will allow the stock to be considered for various stock indexes, which would enable new and more institutional investors to buy the stock. It also gives Match Group greater flexibility in pursuing new opportunities through mergers and acquisitions, though it has already been rolling up much of the dating service space under its broad umbrella.

One area of concern could be the level of debt Match Group will assume as a result of the spinoff. IAC is transferring some $1.7 billion worth of exchangeable notes and hedging instruments from its balance sheet to Match Group's balance sheet, more than doubling the $1.6 billion in long-term debt the dating service had at the end of the third quarter.

While Match Group is clearly the leading player in the dating space, and despite its acquisitiveness, it still faces a lot of competition in what could be seen as a maturing, saturated market. Facebook launched its Dating app in September, for example, and Bumble has proven to be an elusive quarry Match can't catch.

Match Group will now have higher interest expenses and increased leverage, which may prove a hindrance as it pursues greater international opportunities.

Best that could be hoped for

While Match Group's stock bounced sharply higher on the news of the separation plan, as the market sees it as a generally positive development, shares of the dating app had scaled back the gains it had previously made due to concerns about slowing revenue growth.

Third-quarter revenue had exceeded analyst top and bottom line expectations, but guidance for the fourth quarter was below Wall Street's outlook, and the increase in the number of Tinder paying subscribers slowed during the period, possibly related to the lawsuits and probes Match faces over fake accounts.

The spinoff of Match Group from IAC/InterActiveCorp is largely seen as a win-win for both companies, though IAC seems to be the one coming away with the most benefits. Still, Match's premier positioning and otherwise strong financial operations should allow it to successfully handle the enhanced debt load it will be carrying.

Moreover, it no longer has to worry about IAC siphoning away its largesse and will be able to set its own course. Although the deal might not be quite the bellringer Wall Street seems to think, there should be a clearer path forward once the dust from the spinoff settles down.